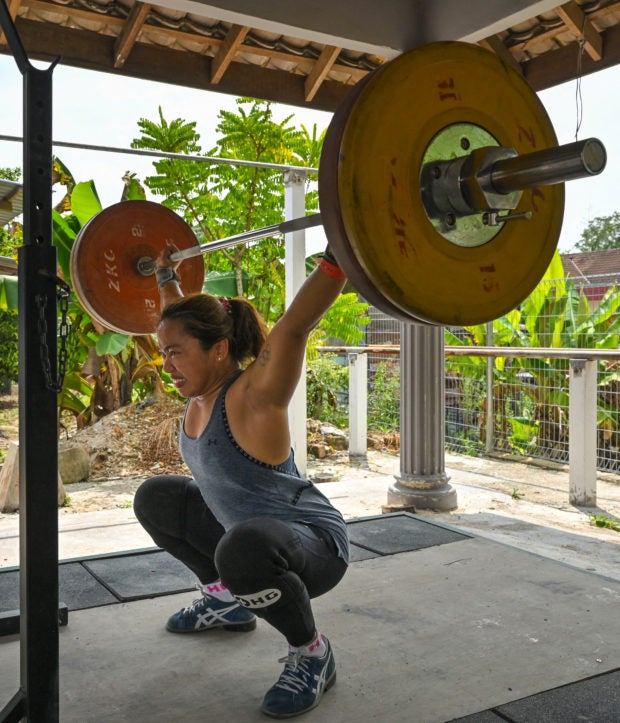 This picture taken on May 21, 2021 shows Olympic weightlifter Hidilyn Diaz of the Philippines lifting weights during a training session in Jasin in the Malaysian city of Malacca. – Filipina weightlifter Hidilyn Diaz, who took silver at Rio 2016, has been stuck in Malaysia since February last year because of the coronavirus pandemic but has remained determined to realise her dream of becoming the first Olympic gold medal winner from the Philippines.  (AFP)

JASIN, Malaysia  – Filipina weightlifter Hidilyn Diaz grunts with the effort of hoisting a barbell over her head in an outdoor makeshift gym ringed by banana and rambutan trees as trucks thunder past — an unlikely training base for a shot at Olympic gold in Tokyo.

Diaz, 30, who took silver at Rio 2016, has been stuck in Malaysia since February last year because of the coronavirus pandemic but has remained determined to realise her dream of becoming the first Olympic gold medal winner from the Philippines.

“I’m ready. I can’t say at what percent, but I’m there — my mind is there, my heart is there, physically it’s there,” Diaz told AFP during a break from her long hours of final preparation in energy-sapping heat and humidity for her fourth, and probably last, Olympics.

Diaz is already assured a place in her country’s sporting folklore, alongside the likes of boxing icon Manny Pacquiao, as the only woman from the sprawling archipelago ever to win an Olympic medal — her surprise silver in Rio breaking a 20-year medal drought for the Philippines.

Her stature grew two years later when she struck gold at the Asian Games in Indonesia and repeated the feat at the South East Asian Games on home soil in December 2019.

Diaz had then been firmly on course to take her chance at Olympic glory just a few months later, but the coronavirus changed everything as the Games were postponed by a year.

“It’s difficult to have a goal and have it extended by how many months and at the same time you know you have plans after the Olympics,” said Diaz, who serves in the Philippines Air Force and will compete in the 55kg class in Tokyo.

The daughter of a tricycle driver in a poor village near the port of Zamboanga on the southern island of Mindanao, Diaz has not seen her family since December 2019. She initially went to train in Malaysia in February 2020 because her Chinese coach, Gao Kaiwen, thought it would be better for her as she focused on qualifying for Tokyo.

But within weeks came Covid-19 restrictions leaving Diaz to battle gym closures, lack of access to weightlifting equipment and the grinding uncertainty of whether the Games would be held at all.

For months Diaz and her coaches — “Team HD” — were stuck in an apartment block in the capital Kuala Lumpur where they had to be careful not to crack the tiled floor while training with weights.

But the tireless Diaz still managed to find time to raise money through online training sessions to distribute food packages to poor families back home who were suffering during coronavirus lockdowns.

In October, Diaz and her team relocated to a rural area in the southern coastal state of Malacca where they have been living in the house owned by a Malaysian weightlifting official.

She began using a nearby gym but restrictions were tightened again forcing her to work out in the house’s car port, sweating profusely in the tropical heat.

“Whenever there’s a lockdown our world really stops and you don’t know what to do and you’re shocked,” she said.

“If I didn’t have Team HD, I admit I wouldn’t be here, I would have gone home to the Philippines.”

The disruption has affected Diaz, who was only fourth at the Asian Championships in Tashkent last month, her first competition for more than a year. It was enough to secure her Olympic berth, but far from her best, she admitted.

Diaz endured 10 more days quarantine on her return, six confined to a hotel room with the final four back at the house, using an exercise bike, dumbbells and rubber power bands to maintain her fitness and strength.

She is fiercely determined to be in the best shape for the Olympics, which open in under two months on July 23.

“The pressure is high because of course… everyone’s expecting me to win the gold medal in Tokyo,” she said.

“I don’t want to promise to win gold, I just want to do it.”

Training alongside a busy road, Diaz is often joined by local children eager to learn how to lift weights.

“I’m happy when children join weightlifting and they get curious because that’s how I started,” said Diaz, who began by carting five-gallon (18 litre) jugs of water for her family as a child.