James Yap pays tribute to Pingris: 'One of best teammates I’ve ever had' | Inquirer Sports

James Yap pays tribute to Pingris: ‘One of best teammates I’ve ever had’ 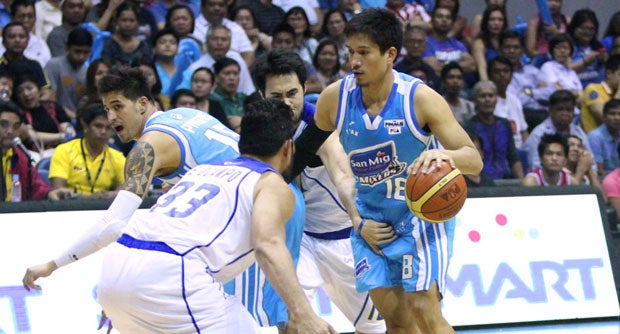 MANILA, Philippines—James Yap and Marc Pingris’ partnership is undoubtedly one of the most beloved pairings in PBA history that even when the two were separated, the friendship between them remained as solid as ever.

Both were members of the 2004 Draft class but it was Pingris who hung up the sneakers first when he announced his retirement on Tuesday.

Yap is still far from retiring but he wished the best of luck to the power forward who helped him win his seven career titles, calling Pingris one of his best teammates ever.

(We had so many on-court wars together, we were with each other through difficulties and victories. We started at the same time in 2004 that’s why I was surprised that you’re retired. I want to take this opportunity to thank you for everything you’ve done for me.)

Pingris would play just a handful of games for FedEx before getting shipped to the Purefoods franchise and join Yap as the pair won their first title together in the 2006 Philippine Cup.

That partnership, however, lasted just three years as Pingris was traded to the San Miguel franchise in 2008 where he would stay until 2009 before going back to Purefoods prior to the start of the 2009-10 season.

It was during Pingris’s second stint with Purefoods that he and Yap became megastars, collecting six more championships together including the 2014 Grand Slam under head coach Tim Cone.

“Our brotherhood and friendship started with basketball [but I know] that we go beyond that, na kahit di na tayo pareho naglalaro di magbabago ang samahan natin (even if we’re not playing together, our friendship will stay the same),” wrote Yap. “Congrats [on the’ retirement ‘tol. See you around!'”

Pingris won two more titles with the Purefoods franchise but Yap was traded to Rain or Shine in 2016.