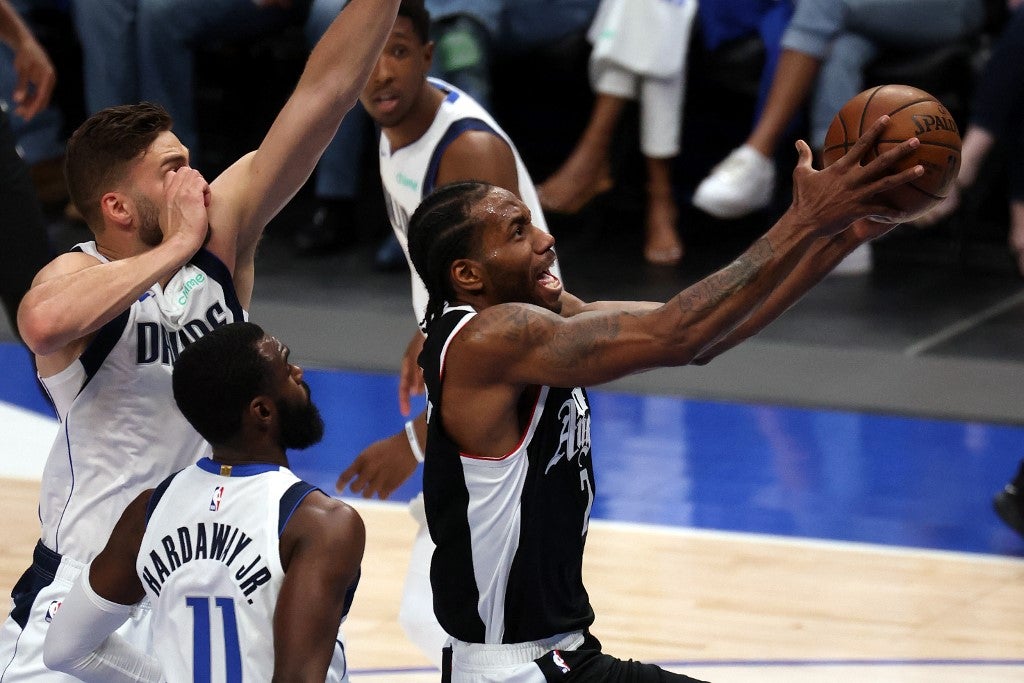 DALLAS, TEXAS – MAY 30: Kawhi Leonard #2 of the LA Clippers takes a shot against the Dallas Mavericks in the first quarter in game four of the Western Conference first round series at American Airlines Center on May 30, 2021 in Dallas, Texas. Ronald Martinez/Getty Images/AFP

Kawhi Leonard had 29 points and 10 rebounds to help the Los Angeles Clippers even their Western Conference first-round playoff series against the host Dallas Mavericks with a 106-81 win in Game 4 on Sunday night.

Paul George added 20 points and nine rebounds for the Clippers, who lost the first two games of the series in Los Angeles before bouncing back to win the next two on the road.

Reggie Jackson scored 15 points and Nicolas Batum, who replaced Ivica Zubac in the starting lineup, contributed 10 points for the Clippers, who host Game 5 on Wednesday night.

Luka Doncic came in averaging 38 points and 8.7 rebounds through the first three games of the series, but has been bothered by a cervical strain on his left side and was limited to 19 points, six rebounds and six assists. He made just 9 of 24 shots from the field, including 1-for-7 from 3-point range.

Kristaps Porzingis contributed 18 points, but the remaining Dallas starters beyond him and Doncic combined for 12 points on 4-for-20 shooting.

As a team, the Mavericks shot 5-for30 from 3-point range, a single-game season-low 16.7 percent, after averaging 18.3 baskets and shooting 50.5 percent from 3-point distance through the first three games of the series.

Kawhi's efficient double-double leads the @LAClippers to their 2nd straight win in Dallas, tying the series at 2-2. Game 5 is Wed. at 10pm/et on TNT.

The Mavericks’ only surge came when 7-foot-4 center Boban Marjanovic made his first appearance of the series midway through the first quarter and scored four of his 12 points, but the Mavericks never regained the lead.

Dallas missed its first seven 3-point attempts before Jalen Brunson hit one at the first-quarter buzzer to cut the lead to 31-22.

The Clippers eventually took a 61-45 lead into the half, and then scored the first eight points of the second half to move ahead 69-45.

Los Angeles expanded the lead to as much as 28 in the third quarter before taking an 82-60 lead into the fourth.