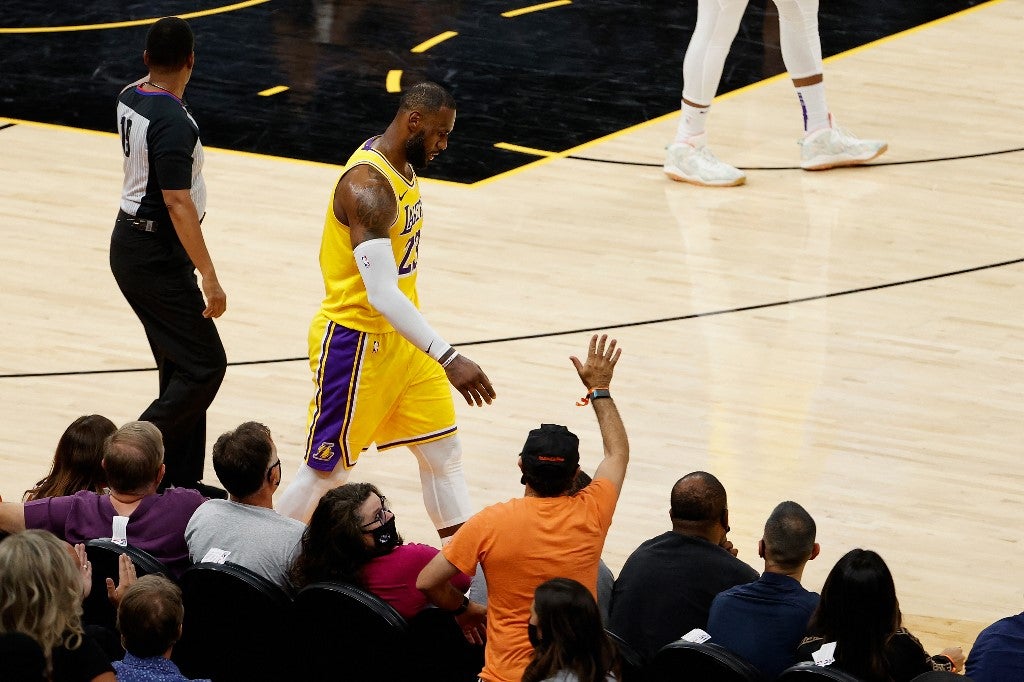 LeBron James #23 of the Los Angeles Lakers reacts as he walks off the court during the second half in Game Five of the Western Conference first-round playoff series at Phoenix Suns Arena on June 01, 2021 in Phoenix, Arizona. Christian Petersen/Getty Images/AFP

LeBron James made no excuses after the Los Angeles Lakers were left facing elimination from the NBA playoffs on Tuesday following a humiliating defeat to the Phoenix Suns.

“We got our ass kicked — it’s that simple,” James said, after being asked to sum up what had gone wrong in a 115-85 mauling in Phoenix.

The game five loss leaves the Suns 3-2 ahead with two games to play, meaning the Lakers must win both of their remaining games to extend their postseason.

James however said the Lakers would need to show improvement in game six at the Staples Center on Thursday if they are to keep the series alive.

LeBron James has lost consecutive 1st round games for the first time in his career.

This is also the first time in LeBron's career that he trails a 1st round series after Game 5 or later. pic.twitter.com/fketlhfVEB

“We’ve got to be better if we want to force a game seven,” James said. “A lot to cover and see what we can do better in game six, but they pretty much just kicked our ass, there’s nothing else really to say.”

James hopes the high-stakes nature of Thursday’s game in Los Angeles will bring out the best in the reigning NBA champions.

“It’s literally win or go home at this point,” James said. “You shoot all the bullets you got and throw the gun too.

“I’m looking forward to the environment. Obviously the Laker faithful will give us a lot of energy. I look forward to the moment and the challenge, and see what brings out the best of me.”

James meanwhile said he is not expecting teammate Anthony Davis to recover from a groin injury in time for Thursday’s game. Davis’s physical presence was sorely missed on Tuesday as the Suns ran riot.