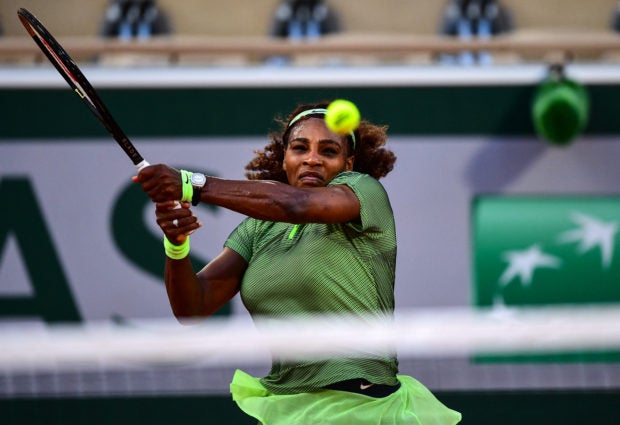 Serena Williams of the US returns the ball to Romania’s Mihaela Buzarnescu during their women’s singles second round tennis match on Day 4 of The Roland Garros 2021 French Open tennis tournament in Paris on June 2, 2021. (AFP)

The American, seeded seventh, will play compatriot Danielle Collins for a last-16 berth as she looks for a fourth French Open crown, but first since 2015.

“It was good competition, she was playing well and I was playing well,” said the former world number one, who has withdrawn injured mid-tournament on two of her last three visits to Roland Garros.

Williams has already seen two of her likeliest title rivals either fail to start the tournament or pull out in unprecedented circumstances.

World number three Simona Halep, who defeated Williams in the 2019 Wimbledon final, withdrew before the event with injury.

The biggest story of the week so far has been world number two Naomi Osaka’s shock withdrawal after a press boycott, saying she has been suffering with “bouts of depression” since her breakthrough triumph over Williams in the controversial 2018 US Open showpiece match.

Williams started well on Wednesday with a comfortable opening set, but paid for missing seven of eight break points in the second as world number 174 Buzarnescu forced a decider.

But she double-faulted on break point in the first game of the third set and Williams cruised to the finish line.

Tsitsipas, regarded as the favourite to reach the final from his half of the draw, put in a strong display to dispose of Spaniard Pedro Martinez 6-3, 6-4, 6-3.

“We’re here at a Grand Slam and it’s a big opportunity… But of course it’s going to be a challenge,” said the 22-year-old Tsitsipas, who has never reached a major final.

He has won his last three meetings with Isner.

The Russian, who had never got past the first round in four previous appearances, will eye a fourth-round spot against US 32nd seed Reilly Opelka.

After a sloppy opening set, the two-time Grand Slam runner-up was far too strong for Paul, breaking his 52-ranked opponent eight times.

Sixth seed Alexander Zverev was in scratchy form but did enough to see off Russian qualifier Roman Safiullin in straight sets.

Zverev had needed to fight back from two sets down in his opening match against qualifier Oscar Otte.

“I’m happy to be through in three sets,” he said. “I’m happy not to have played another five-setter. I think it’s going to be important for me during the course of this tournament.”

Bencic knocked out by Kasatkina

“I would say wasn’t great level from me today, but I’m really proud of myself that I was fighting no matter what,” said Madrid Open winner Sabalenka.

Bencic has still never made the fourth round in five appearances.

Former world number one Victoria Azarenka set up a third-round tie against Madison Keys with a 7-5, 6-4 win over Denmark’s Clara Tauson.

The Belarusian’s best Roland Garros run was a semi-final appearance eight years ago and this is the first time she has made round three since 2015.