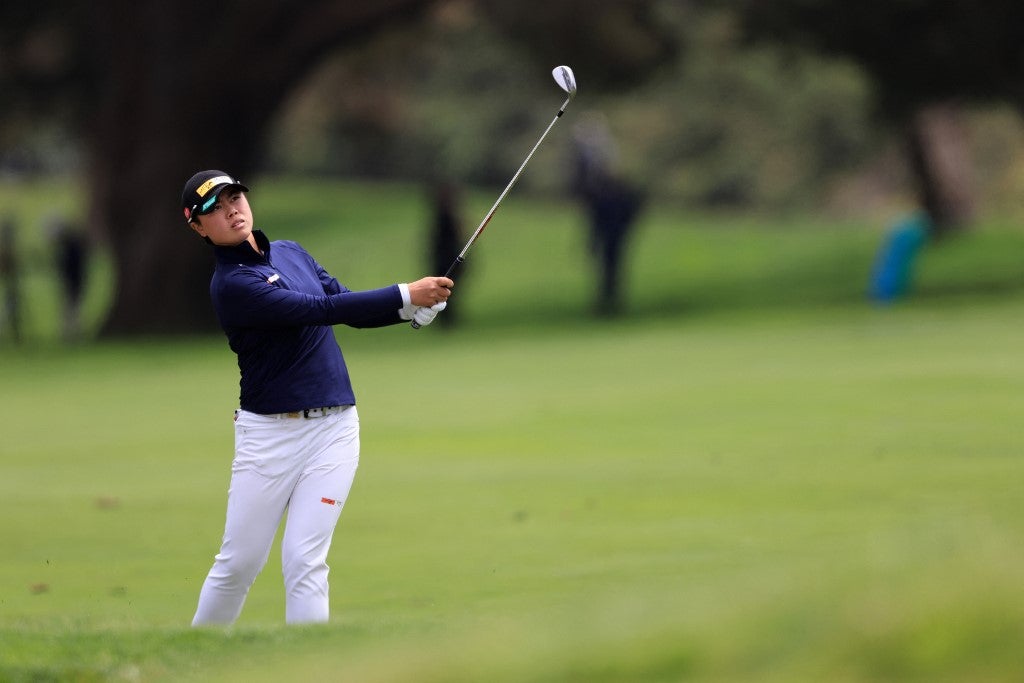 Yuka Saso of the Philippines hits an approach shot on the 17th hole fairway during the first round of the 76th U.S. Women’s Open Championship at The Olympic Club on June 03, 2021 in San Francisco, California. Sean M. Haffey/Getty Images/AFP

Teenage amateur Megha Ganne faced down the imposing Lake Course at Olympic Club on Thursday firing six birdies in a four-under-par 67 to join Mel Reid atop the US Women’s Open leaderboard.

Reid, a six-time winner on the Ladies European Tour who claimed her first LPGA Tour title in October, came out firing, opening with back-to-back birdies as she set an early target that no one but New Jersey high school junior Ganne could match.

Ganne had actually vaulted over Reid, taking sole possession of the lead at five-under after birdies at the 15th and 16th holes, but she bogeyed 18, where she was in the rough and a greenside bunker.

Amateur Megha Ganne and Tour winner @melreidgolf share the lead after the first round of the @uswomensopen.

“I think just my ability to play smart and not take any unnecessary risks,” Ganne, 17, said of the key to her round. “And I didn’t panic when I got into the rough a couple of times out there — because there are definitely holes I wasn’t keeping in the fairway, and it’s easy to panic out there, and I didn’t do that.”

She admitted that the course, which has hosted five men’s US Opens but never before hosted a women’s major, was “kind of terrifying” at first sight.

“But I got some (practice) rounds in and gained a little bit of confidence,” Ganne said.

Ganne, who won a playoff to qualify for the championship, also had the experience of playing the US Open two years ago to draw on.

“I think the first time is nerve-racking for anybody and meeting your idols and being on the stage for the first time,” she said. “But the second time around, even the practice rounds, I wasn’t as nervous. I felt like I could come here and just play my game instead of soaking that all in.”

Reid and Ganne had a one-shot lead over world number five Brooke Henderson of Canada and Americans Angel yin and Megan Khang.

Henderson arrived at the 18th with a share of the lead but three-putted from within 20 for a closing bogey.

It was a further stroke back to China’s Feng Shanshan, American Lexi Thompson and Yuka Saso of the Philippines.

Yuka Saso mounts her hushed battle in the US Women’s Open beginning Thursday in San Francisco, California, armed with a game she hoped would hold up against the best of the best in the next four days.

World number one Ko Jin-young headed a group of seven – players on one-under 70 — a total of 15 players finishing the first-round under par.

World number two Park In-bee was in a group at even par 71, but third-ranked Kim Sei-young settled for a three-over 74 and fourth-ranked nelly Korda signed for a seven-over 78.

Defending champion Kim A-lim fared even worse, with an eight-over 79 that included a double bogey-bogey start as well as a triple bogey on her card.

Reid was relishing the tough conditions. After a birdie at her opening hole — the ninth, she found herself in dense rough at No. 10.

Undaunted, she blasted out to 10 feet and made the putt.

“I love the rough. That’s how a US Open should be,” said Reid, who added another brace of birdies at 15 and 16 before her lone bogey at 18.

She picked up one more birdie at her penultimate hole, the seventh.

“I didn’t think that score was out there honestly,” Reid admitted, but she was pleased that her strategy worked out.

“I had a pretty good game plan,” she said. If you’re in trouble, just get it out, make bogey. I think the key here is to not take many risks the first two, three days, and I didn’t do that.”

Aiming to improve on prior US Open performances — she missed the cut in four of her last five starts — she talked to Brooks Koepka, a two-time men’s US Open champion — about how to tackle the event.

“He gave me a few things that he follows by in a major, so obviously appreciate his help,” Reid said. “What he told me was, I thought, invaluable honestly, and it made me have a little bit different approach.”