Switzerland’s Roger Federer returns the ball to Germany’s Dominik Koepfer during their men’s singles third round tennis match on Day 7 of The Roland Garros 2021 French Open tennis tournament in Paris on June 5, 2021. (AFP)

PARIS, France –  Novak Djokovic and Rafael Nadal recorded new French Open landmarks as they moved effortlessly into the fourth round on Saturday, setting up intriguing duels with a pair of Italian teenagers seen as heir apparents to the Grand Slam superstars.

However, with his 40th birthday just two months away, Roger Federer showed that he is still a force after battling into the second week for the 15th time in a tie which ended in the early hours of Sunday.

The world number one is in the last 16 for the 12th successive year and will next face 19-year-old Lorenzo Musetti who is making his debut at the Slams. 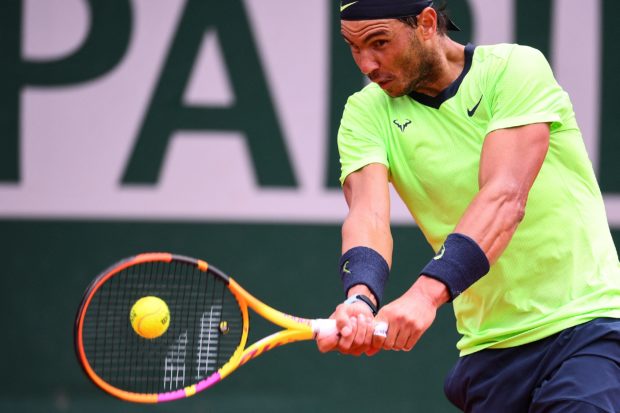 Spain’s Rafael Nadal returns the ball to Britain’s Cameron Norrie during their men’s singles third round tennis match on Day 7 of The Roland Garros 2021 French Open tennis tournament in Paris on June 5, 2021. (AFP)

Defending champion Nadal reached the fourth round for a record 16th time, claiming his 103rd victory in Paris to set a new record of match wins at a Grand Slam, eclipsing Federer’s 102 victories at the Australian Open

He becomes just the sixth man since 2000 to make the fourth round of a Slam on debut.

“I have practised with Novak so I know a little bit about his game. This is what I have been working for since childhood,” said Musetti.

Djokovic said he was a fan of Musetti with whom he practised in Monte Carlo this year.

“He’s got a lot of firepower from both forehand and backhand,” Djokovic said. 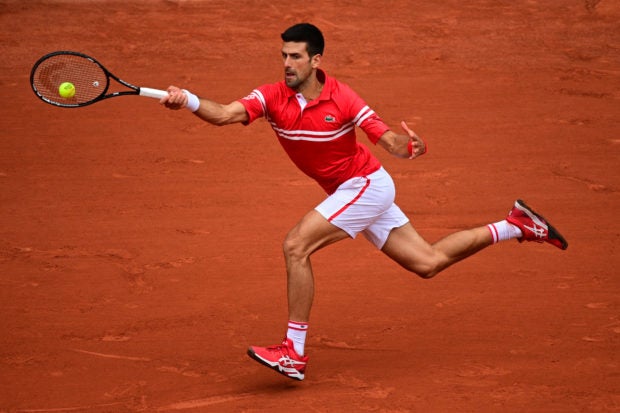 Serbia’s Novak Djokovic returns the ball to Lithuania’s Ricardas Berankis during their men’s singles third round tennis match on Day 7 of The Roland Garros 2021 French Open tennis tournament in Paris on June 5, 2021. (AFP)

Nadal defeated Sinner in the quarter-finals in 2020 but expects a much tougher assignment on Monday.

“Jannik is not the best fourth round. Without a doubt, he’s a dangerous one,” Nadal said.

“I need to be ready to play at a very high level.”

His tie ended just before 12:45 Sunday morning and was played inside Court Philippe Chatrier devoid of fans due to a government-enforced Covid-19 curfew.

The 39-year-old, who underwent two knee surgeries last year and is playing just his third event since the 2020 Australian Open, next faces Italy’s Matteo Berrettini.

“There are still a few people here, I don’t know who they are: sponsors, journalists, my team too,” said Federer after the three and a half hour tussle.

“I love tennis, I like to play. I might have been more nervous if the stadium had been full.”

Barbora Krejcikova of the Czech Republic reached the last 16 for the second successive year with a 6-3, 6-2 victory over three-time quarter-finalist Elina Svitolina as only three of the top 10 women’s seeds made it to the second week.

World number 33 Krejcikova goes on to face former US Open champion Sloane Stephens for a place in the quarter-finals.

The top three seeds, Ashleigh Barty, Naomi Osaka and Aryna Sabalenka all failed to get beyond the third round.

Swiatek reeled off 11 of the last 13 games and will next face Ukraine’s Marta Kostyuk.

American 17-year-old Coco Gauff made the last 16 for the first time when compatriot Jennifer Brady retired with a foot injury after dropping the first set.