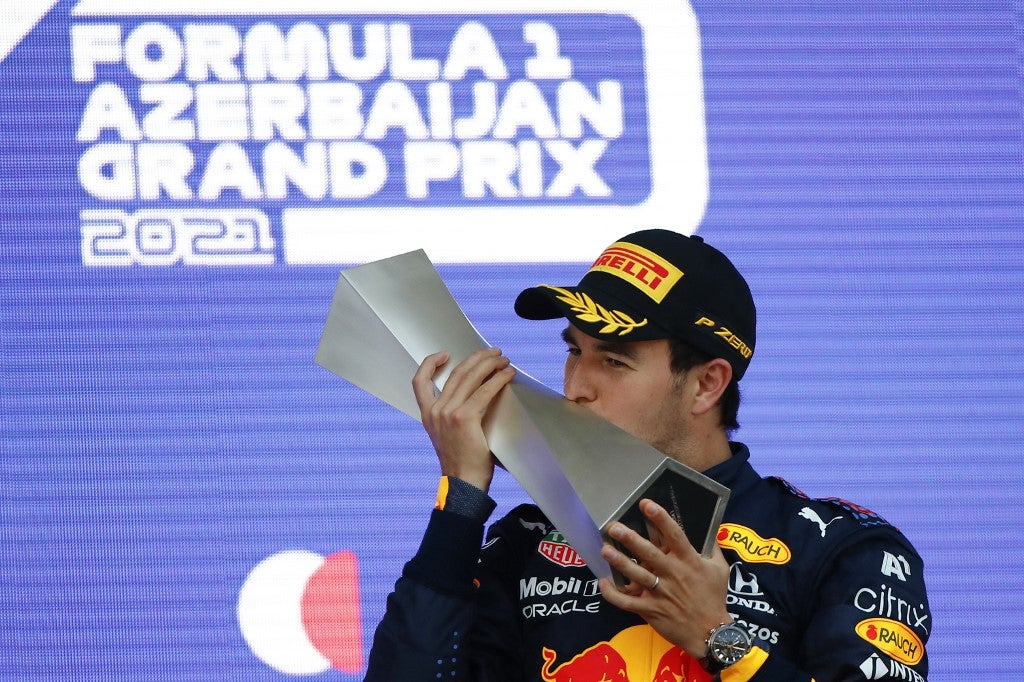 Red Bull’s Mexican driver Sergio Perez celebrates on the podium after winning the Formula One Azerbaijan Grand Prix at the Baku City Circuit in Baku on June 6, 2021. (Photo by MAXIM SHEMETOV / POOL / AFP)

Sebastian Vettel for Aston Martin and Pierre Gasly for Alpha Tauri completed the unexpected podium after the streets of Baku lived up to their reputation for delivering an afternoon of drama and tension.

Verstappen crashed with five laps to go and the sixth race of the season at his mercy. Hamilton then locked up at the restart when on target for second.

A massive moment from a mad race 😵

As the dust began to settle on the banks of the Caspian Sea, Verstappen retained his slender four point lead in the drivers standings.

His teammate Perez gained his first win since joining Red Bull and the second of his career.

“I’m so happy for today. Normally Baku is pretty crazy but I have to say sorry to Max.

“He deserved the win today and it would have been good for the team to get a 1-2, but the win is a fantastic result.”

Perez inherited the lead when Verstappen’s left rear tyre shredded triggering a high-speed crash in the straight as he was set to collect his second consecutive win and third of the season.

“Tyre!” shouted a distraught Verstappen on the team radio.

After a red-flag stoppage lasting more than half an hour to clear debris from Verstappen’s stricken car, the grand prix resumed from the grid with a two lap sprint to the chequered flag.

Hamilton looked to have the measure of Perez but the Mercedes seven-time world champion spun off at turn one, leaving the band to play the Mexican rather than British national anthem.

Pole-sitter Charles Leclerc came in fifth ahead of Fernando Alonso for Alpine and Japanese rookie Yuki Tsunoda celebrating his highest finish for Alpha Tauri in seventh. Hamilton was 15th and out of the points for the first time since Austria in 2018.

“We’ve worked so hard to come back into the top 10 and I put everything on the line but just lost out in the end.

“I clipped a switch that places the brakes off so I just went straight on at turn one on the restart.

“I’m very sorry to the guys and girls in the team. I had no idea that I’ve even touched the ‘magic’ switch.”

There was a sombre start to proceedings with a minute’s silence for Max Mosley, the former FIA boss who died last month, and Mansour Ojjeh, McLaren’s influential majority stakeholder, who died earlier Sunday.

Leclerc made a slick start, but Hamilton was lurking and the world champion surged past the pole-sitting Ferrari going into turn one at the start of lap three.Mansour

Verstappen executed an identical manoeuvre to move past Leclerc and into second on lap seven.

Hamilton came in for a pit stop on lap 12, rejoining having swopped soft tires for hard in fourth – another car costing him vital seconds on his exit from the pits.

The German four-time former champion came in eventually to leave the two Red Bulls being hunted down by Hamilton approaching the midway point of the 51-lap contest.

The only driver not to have pitted was Lance Stroll, but the Canadian was back in the pits in the medical car on lap 31 after a high-speed smash on the straight when his left rear tyre shredded.

“Whoa, whoa, whoa. Get me out of this place on the track. Puncture, I think,” he said, the crash forcing a long safety car interval.

Vettel, enjoying his best race for new team Aston Martin, jumped Leclerc and then picked off Gasly to leave Hamilton in his cross-hairs.

With five laps to go Verstappen’s race was cruelly over, but Perez managed to save the day for Red Bull.