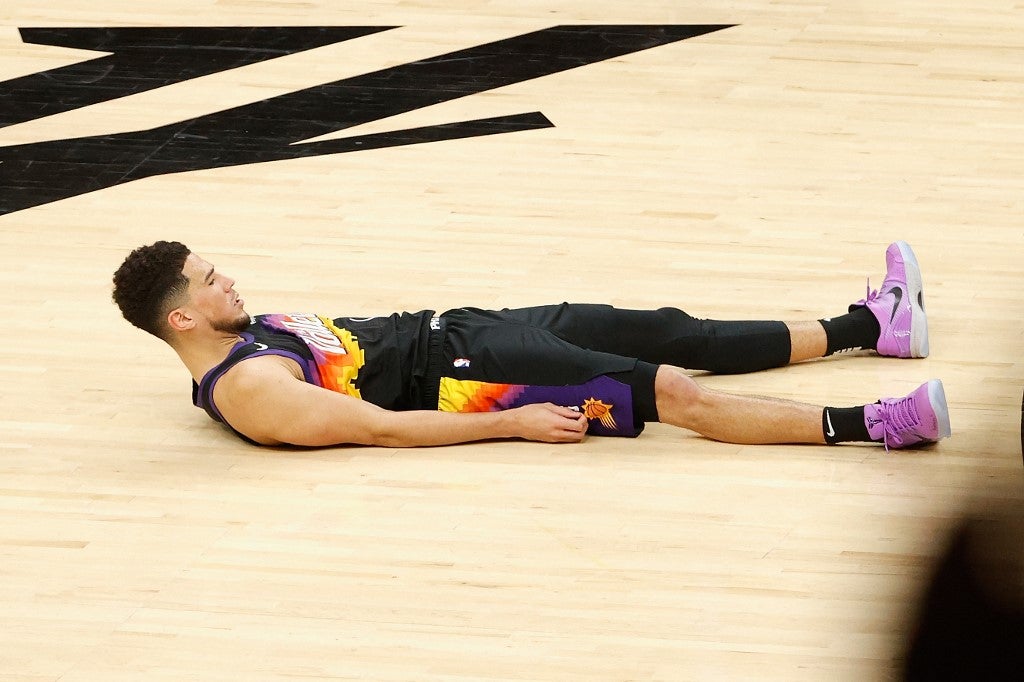 PHOENIX, ARIZONA – JUNE 07: Devin Booker #1 of the Phoenix Suns reacts to a three-point shot and foul from the Denver Nuggets during the second half in Game One of the Western Conference second-round playoff series at Phoenix Suns Arena on June 07, 2021 in Phoenix, Arizona. Christian Petersen/Getty Images/AFP

Chris Paul scored 14 of his 21 points in the fourth quarter and also contributed 11 assists and six rebounds to help the Phoenix Suns record a 122-105 victory over the visiting Denver Nuggets in the opening game of the Western Conference semifinals on Monday night.

🔊 @CP3 discusses his support system both on and off the court after the @Suns Game 1 win. #ThatsGame #NBAPlayoffs

Game 2 will be Wednesday night, also in Phoenix.

The Nuggets connected on 46.7 percent of their shots and were 14 of 40 from behind the arc.

Denver held a 72-63 lead after two free throws by Austin Rivers with 7:34 left in the third quarter before the Suns exploded for 16 straight points en route to controlling the remainder of the contest.

Ayton’s three-point play put Phoenix ahead at 74-72 with 4:26 left in the third before Booker nailed a 3-pointer and Bridges added a basket to complete the run and give the Suns a seven-point lead.

Porter knocked down a 3-pointer with 3:22 left to end a Denver scoring drought of 4:12.

The Nuggets were again within four later in the stanza before Phoenix rattled off 11 consecutive points. Ayton’s dunk and Bridges’ 3-pointer gave the Suns an 88-79 lead entering the fourth quarter before Dario Saric scored a basket and Paul knocked down back-to-back jumpers to make it 94-79 with 10:27 left in the contest.

Paul Millsap scored in the interior with 10 minutes left to halt the Phoenix run. But the Suns kept the heat on as Paul converted a three-point play and a 3-pointer and Cameron Payne fed the alley-oop to Torrey Craig for a ferocious dunk that increased the Phoenix lead to 102-84 with 8:36 left.

Crowder later knocked down a 3-pointer to make it 114-97 with 3:34 left, and Booker added a jumper 26 seconds later to end any suspense. The Suns’ lead topped out at 20 points.

Jokic had 15 first-half points as the Nuggets held a 58-57 lead at the break.

Read Next
LeBron James, Anthony Davis to skip Tokyo Olympics—report
EDITORS' PICK
Connect to PH’s fastest network with new Signature Plan Lite at only P599 per month
Tips for a cheerful life
Duterte warns of possible lockdown if ‘more aggressive’ Delta variant spreads
Harnessing technology for quality education
Hidilyn Diaz wins weightlifting gold in Tokyo Olympics
Duterte: When I said I will fight drugs in 6 months, I thought it was like in Davao
MOST READ
Hidilyn Diaz wins weightlifting gold in Tokyo Olympics
Go to war with China over West PH Sea? It will be a ‘massacre’, says Duterte
Hidilyn shoots not only for gold but also for permanent place in PH sports history
Duterte acclaims Sotto: ‘He can become a good vice president’
Don't miss out on the latest news and information.