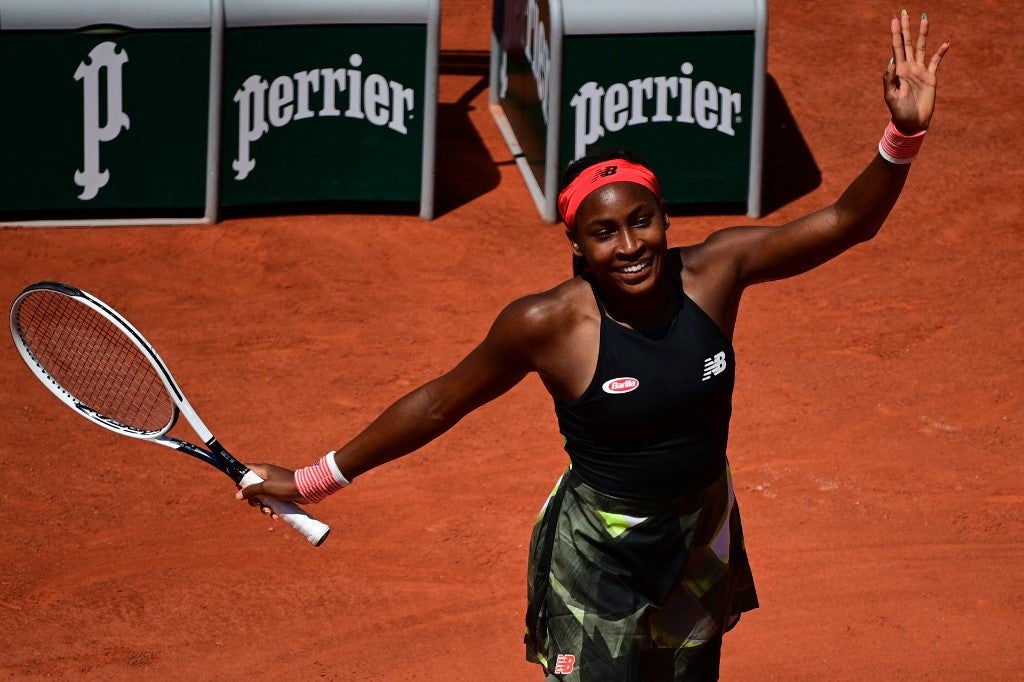 Coco Gauff of the US celebrates after winning against Tunisia’s Ons Jabeur during their women’s singles fourth round tennis match on Day 9 of The Roland Garros 2021 French Open tennis tournament in Paris on June 7, 2021. (Photo by MARTIN BUREAU / AFP)

PARIS – The rights and wrongs of tennis players being obliged to offer their innermost thoughts to the world’s media after matches has come under scrutiny at the French Open, but 17-year-old Coco Gauff manages the task with consummate ease.

It was a clinical performance underpinned by sensational serving and with big names losing left, right and center, the odds on her winning the title are lowering.

But it is not just on court that Gauff has all the right answers — her open and honest nature allows her to handle the inevitable spotlight like a seasoned professional.

Asked whether she gets bored having to talk about her age, Gauff swatted away the question as if it were a juicy forehand.

“I don’t really care if you guys talk about my age or not. I’m 17. That’s the truth,” Gauff told a post-match press conference.

Gauff is three victories from the major title many have predicted since she reached the fourth round of Wimbledon, aged 15.

She next faces experienced Czech Barbora Krejcikova but that is as far ahead as she is prepared, besides a daily game of card game Uno with her parents.

“Right now I’m focused on going to sleep tonight and winning the next Uno match and then tomorrow we focus back on practice and then get ready for the quarter-finals,” she said.

“I think she has improved tremendously, figured out the weaknesses in her game, the forehand, putting more top-spin. The serve was erratic but she has ironed that out.”

If anyone thinks Gauff is satisfied with overcoming the fourth-round hurdle that tripped her up twice before in Grand Slams, they should think again.

“Today, to be honest, I was just more hungry for it,” she said. “In the past, I felt like I was satisfied with the run I made, I came into matches not as hungry.

“It’s probably not a good thing to say but it’s the truth. My message has always been ‘dream big and aim higher’.”