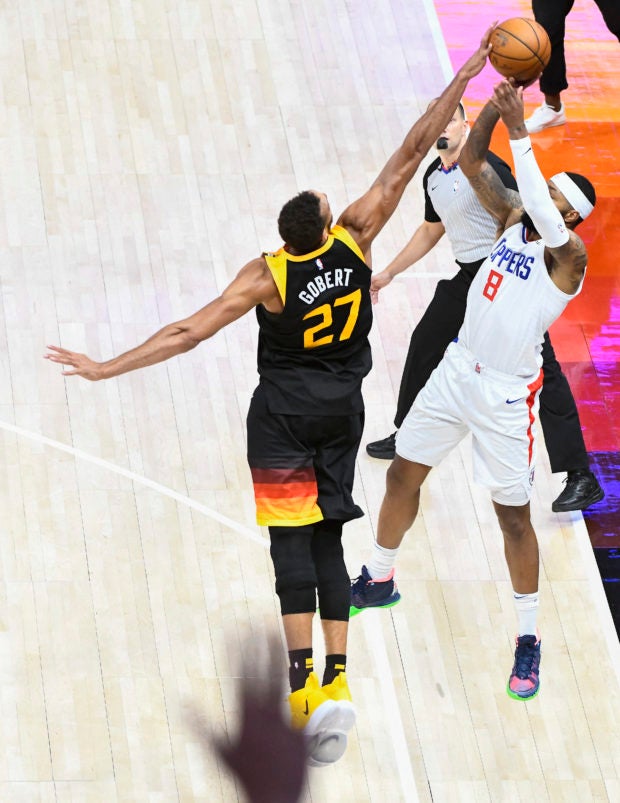 Rudy Gobert  of the Utah Jazz blocks Marcus Morris Sr.  of the Los Angeles Clippers at the buzzer in Game One of the Western Conference second-round playoff series at Vivint Smart Home Arena on June 8, 2021 in Salt Lake City, Utah.  (Getty Images via AFP)

Gobert, who also won the award in the 2017-18 season and in 2018-19, is the fourth player to win the award at least three times, joining Dikembe Mutombo and Ben Wallace — who both won it four times — and Dwight Howard who won it three times.

The 7-foot-1-inch (2.16m) player dubbed the “Stifle Tower” received 84 first-place votes and earned 464 points from a global panel of 100 sportswriters and broadcasters.

He ranked second in blocked shots per game (2.70) and posted six games with at least 15 defensive rebounds and eight games with five or more blocks.

“It takes team effort, mental toughness, hard work and dedication,” Gobert told broadcaster TNT as the award was announced prior to the night’s playoff game between the Denver Nuggets and Phoenix Suns.

TNT broadcast video of Gobert being surprised with the trophy at his locker by cheering teammates.

“It’s been a great year,” he said, “but we have a higher goal and that’s to win a championship.”

The Jazz lead the Los Angeles Clippers 1-0 in their best-of-seven Western Conference second-round playoff series after a 112-109 victory on Tuesday.

Gobert made a key — and characteristic — contribution to that victory with a big block of a three-point attempt by Marcus Morris as time ran out.

Gobert said recently it’s the kind of contribution he feels is expected of him.

“I come in every single night trying to be the best that I can be for this team and anchor this team defensively,” he said.

Behind Gobert, Utah finished third in the NBA in defensive rating and second in opponents’ field goal percentage (44.7).

The strong defense helped propel the Jazz to a league-leading 52-20 regular-season record and the top playoff seed in the Western Conference.

Selected as an NBA All-Star for the second time, Gobert averaged 14.3 points and 13.5 rebounds in 71 games this season.

“The things that Rudy does are unique, and he’s a stabilizing force, particularly on the defensive end,” Jazz coach Quin Snyder said.

Gobert finished third in voting for the 2020 award won by Giannis Antetokounmpo — after a season in which Gobert was in the spotlight early for making light of the emerging coronavirus pandemic by handling reporters’ recorders only to be diagnosed himself with Covid-19.

He later donated $500,000 to support Covid relief efforts and in December he inked a contract extension with the Jazz worth a reported $205 million over five years.

The 28-year-old, who was the 27th overall selection in the 2013 NBA draft, credited his mother with making what has turned into a stellar NBA career possible.

“She sacrificed a lot for me to be able to do what I love,” he said. “I grew up in a small town in France, I wasn’t really supposed to be here.

“If you would have asked me when I started basketball if I was going to win Defensive Player of the Year, I would have probably not believed it. Three of them is just amazing.”