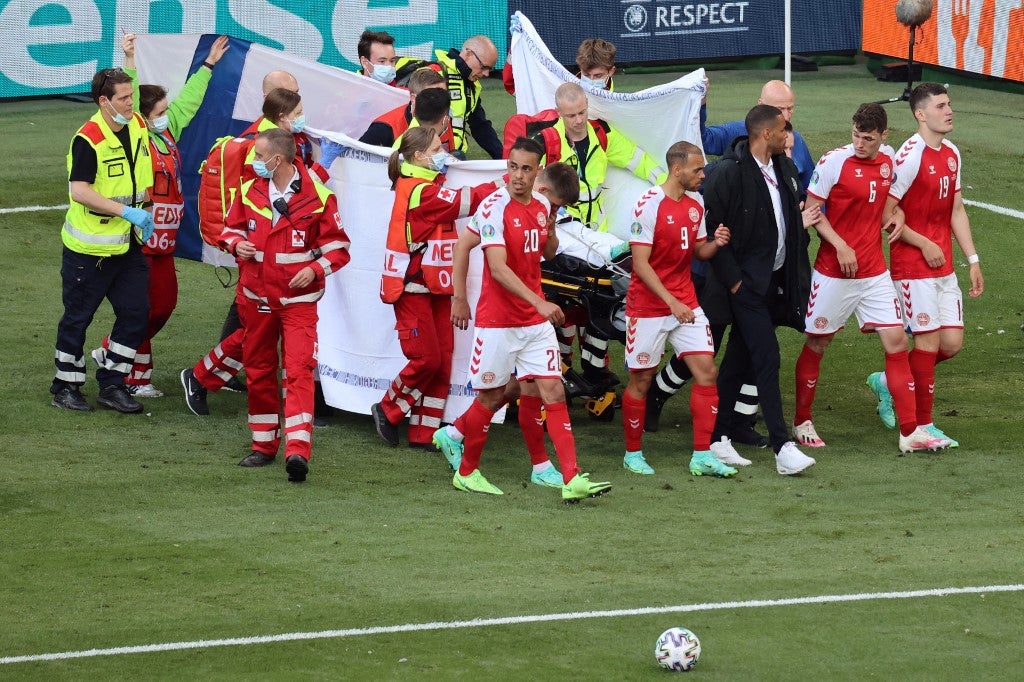 Denmark’s players gather as paramedics attend to midfielder Christian Eriksen (not seen) during the UEFA EURO 2020 Group B football match between Denmark and Finland at the Parken Stadium in Copenhagen on June 12, 2021. (Photo by WOLFGANG RATTAY / various sources / AFP)

Euro 2020 was still reeling Sunday after Denmark midfielder Christian Eriksen collapsed and had to be revived by medics on the pitch during his country’s defeat to Finland.

Eriksen was “awake and undergoing further tests” after he received CPR as his distraught teammates formed a circle around him to shield the stricken player from the view of 16,000 stunned spectators in Copenhagen’s Parken Stadium on Saturday.

The Group B game — just the third of the month-long tournament which kicked off a year behind schedule on Friday — was halted just before half-time with the score goalless and suspended for nearly two hours before restarting.

The Finns won 1-0 thanks to a Joel Pohjanpalo header in their first-ever appearance in the European Championship but Eriksen’s plight overshadowed the match.

“We’ve been in contact with him, and the players have spoken to Christian. That’s the great news. He’s doing fine, and they are playing the game for him,” DBU director Peter Moeller told Danish media.

“When I get to him, he’s on his side. He is breathing and I can see pulse but suddenly that changes, and as everyone saw we started giving him CPR,” he told a press conference.

“The help came really, really fast from the medical team and the rest of the staff, and with their cooperation we did what we had to do. We managed to get Christan back.”

Messages of support poured in for Eriksen and Belgium forward Romelu Lukaku, his teammate at Inter Milan, shouted “Chris, Chris, stay strong — I love you” into a pitchside camera during the celebration for his opening goal in the 3-0 defeat of Russia in Saint Petersburg.

Gareth Southgate’s youthful England side gets its challenge underway on Sunday as it faces 2018 World Cup finalists Croatia at Wembley in a 1300 GMT kickoff.

England is playing all three group games at their London home. If they top Group D they will also play there in the last 16, while London is also the venue for both semi-finals as well as the final on July 11.

“Everyone would say teams at home with a crowd, that there is a slight advantage,” Modric told the BBC.

The Netherlands play Ukraine in Amsterdam to open their account, deprived of the services of the long-term injury absentee Virgil van Dijk but still able to call on a wealth of talent including Barcelona midfielder Frenkie de Jong.

Ukraine’s pre-match preparations have been marred by a row with Russia over their jersey that features patriotic slogans and the outline of Ukraine that includes Crimea, which Russia annexed in 2014.

In Sunday’s third match, tiny North Macedonia will make history as they play their first match in a major tournament as an independent nation when they face Austria in Bucharest.

Much-fancied Belgium showed they will be a force to reckon with as Lukaku scored twice in a 3-0 win for the Red Devils on Saturday.

Thomas Meunier, on as an early substitute, doubled the lead in the 34th minute before Lukaku’s late second capped an impressive Belgium display.

Roberto Martinez’s side coped admirably with the absences of injured midfielders Kevin De Bruyne and Axel Witsel, with captain Eden Hazard only fit enough to make an 18-minute cameo off the bench.

Earlier the tournament, which is taking place in 11 venues all across Europe, stopped off in Baku where Euro 2016 semi-finalists Wales drew 1-1 with Switzerland.

Kieffer Moore, the giant Cardiff City striker sporting a red bandage around his head, scored the equaliser for Wales in the 74th minute, heading in to cancel out Breel Embolo’s opener early in the second half.

“We showed a lot of character, like we always do, to fight back, be brave, get on the ball and get the equaliser,” Wales captain Gareth Bale said.

That result followed Italy’s 3-0 defeat of Turkey in the same Group A in the tournament’s opening game in Rome on Friday, as Andrea Bocelli performed ‘Nessun Dorma’ in the Stadio Olimpico before Roberto Mancini’s side cruised to victory.

World Cup holders France — with Karim Benzema recalled from a five-and-a-half-year international exile — are the favorites to add the continental crown.

They begin their campaign against Germany in Munich on Tuesday, just after holders Portugal play Hungary in the same Group F.