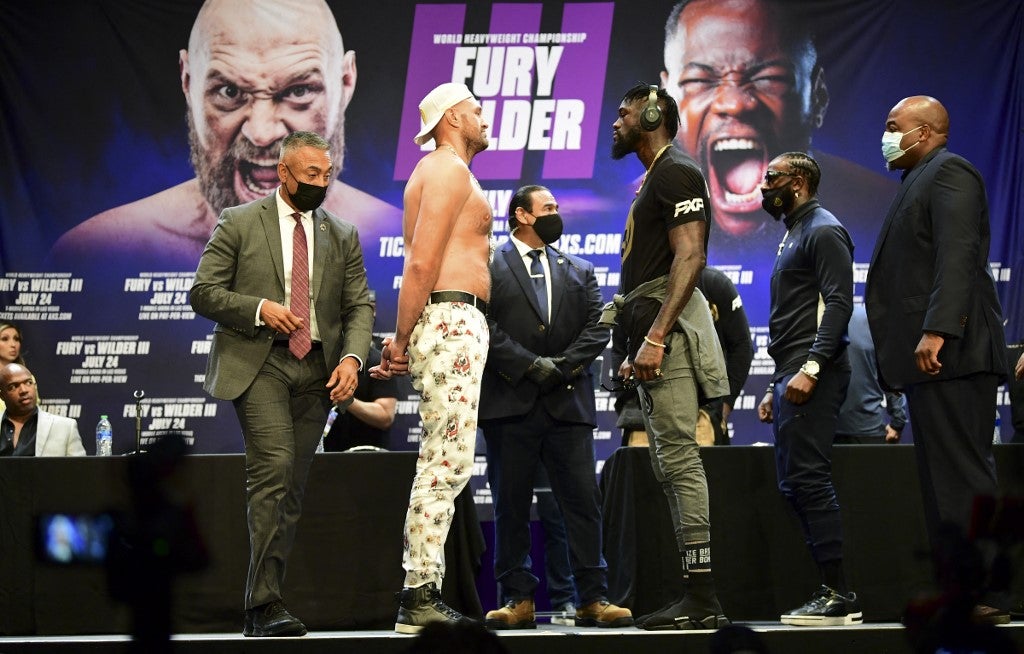 LOS ANGELES—WBC heavyweight champion Tyson Fury vowed to run Deontay Wilder down while the challenger said blood will be shed as the fighters came face-to-face in an odd press conference ahead of their July 24 trilogy fight in Las Vegas.

A shirtless and upbeat Fury said that he has added one-punch knockout power to his arsenal and would flatten the American when the bell rings at T-Mobile Arena.

“What I’m going to do to Deontay Wilder this time is I’m going to run him over as if I’m an 18-wheeler and he’s a human being,” said the Briton, who predicted that he would knock Wilder out in fewer than seven rounds.

This staredown was nuts, even with barely any words said.#FuryWilder3 | JULY 24 | Las Vegas | PPV pic.twitter.com/CZtpwYQRGy

“I’m building my weight up, I’m trying to get up to 300 pounds for this fight because I’m looking for a big knockout straight away,” he said.

Wilder kept his headphones on and his mouth shut for the majority of Tuesday’s press conference but spoke briefly to thank his team, which includes new trainer and former professional boxer Malik Scott, and take a shot at Fury.

“Enough said… because come July 24, there will be blood shed,” Wilder said in his smooth, singsong baritone.

The press conference in Los Angeles ended with a more than five-minute long face-off where neither fighter spoke to the other, although members of their camps exchanged words.

“Thank you everybody for turning out for this one-sided press conference,” Fury concluded.