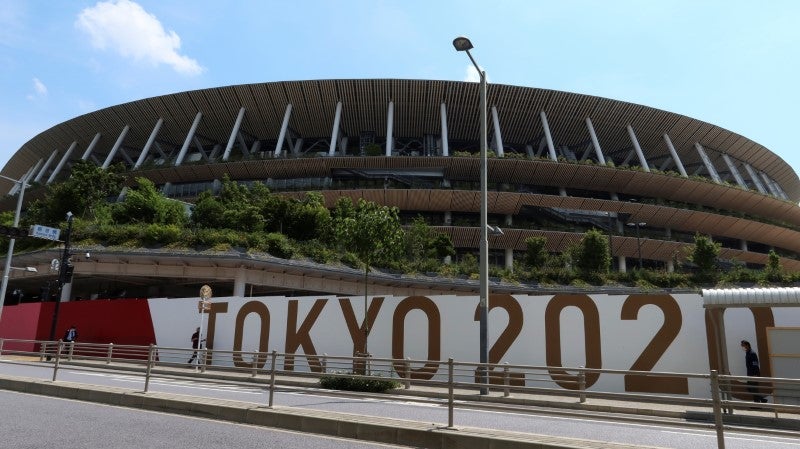 FILE PHOTO: People walk outside the security fence of Olympic Stadium (National Stadium) built for Tokyo Olympic Games, that have been postponed to 2021 due to the coronavirus disease (COVID-19) outbreak, in Tokyo, Japan June 11, 2021. REUTERS/Pawel Kopczynski

TOKYO—Japan will decide this month on whether to allow domestic spectators at the Tokyo Olympics, the government’s chief spokesman said on Wednesday, after experts signed off on a plan to allow crowds of up to 10,000 people at events.

The final call on attendance at the Games will be made taking into account coronavirus infection conditions and the prevalence of variants, Chief Cabinet Secretary Katsunobu Kato told reporters.

Economy Minister Yasutoshi Nishimura said health experts agreed with a government plan that would permit up to 10,000 spectators or 50% of a venue’s capacity, whichever is smaller, at events, under certain conditions.

Allowing such crowds depends on there not being special infection controls under a state of emergency or state of quasi emergency, so they may still not be possible during the Games.

Prime Minister Yoshihide Suga told reporters the government would make a decision on extending the states of emergency after they expire on June 20 after hearing experts’ views on Thursday.

Broadcaster TBS and other media said the state of emergency would not be extended for nine of the 10 prefectures including Tokyo and Osaka. But of the nine, Tokyo, Osaka and five others will instead come under quasi-emergency measures, they said.

Under quasi emergency measures, just like under a state of emergency, spectators at major events are limited to 5,000 or half of a venue’s capacity, whichever is smaller – meaning even if domestic fans were allowed, they would be in the low thousands.

Foreign spectators have already been ruled out from the Olympics beginning on July 23 as part of measures planned to deliver what Japanese government and Olympic officials promise will be a “safe and secure” Games.

Tokyo organizers might be forgiven for eyeing soccer’s European Championship with envy, as tens of thousands of fans are expected to gather in stadiums across the continent throughout the month-long spectacle.

On Tuesday, a full house of 67,000 supporters watched Hungary take on Portugal in their Euro 2020 opener. Other nations are allowing various sized crowds, with up to 45,000 expected at both semi-finals and the July 11 final to be played at London’s Wembley Stadium. A health worker administers the Moderna Covid-19 coronavirus vaccine during the first round of vaccinations for firefighters in Tokyo on June 8, 2021. (Photo by Charly TRIBALLEAU / AFP)

Japan’s top medical adviser Shigeru Omi echoed the comments from the economy minister that attendance limit plans were not tied specifically to the Olympics. Omi told reporters he and other experts were in the final stages of drafting proposals for the Games, declining to elaborate on the details.

Omi has been outspoken the recent weeks about the risks of holding the Games during a pandemic and has said guidance from him and other experts was not making its way to the International Olympic Committee.

The IOC has tried to quell such concerns by saying that most athletes and media coming to Tokyo will be vaccinated, and that so-called playbooks governing hygiene, movements and testing of participants will further mitigate infection risks.

The Olympics have already been postponed by a year amid concerns over how organizers can keep volunteers, athletes, officials and the Japanese public safe when they begin after a fourth wave of infections.

Osaka Governor Hirofumi Yoshimura said Wednesday he was against lifting the emergency declaration “too easily”, adding he would request quasi-emergency measures to avoid an infection rebound.

Japan’s sluggish vaccination push is starting to gain steam of late, and recent polls have pointed to acceptance that the Games will go forward.

Hofu City, in the southwestern prefecture of Yamaguchi, is vaccinating high school students, far ahead of the rest of the country, before they volunteer to help with pre-Games training there by Serbia’s national volleyball team, NHK reported.

Tokyo 2020 board talks about vaccines, but no word on further delay