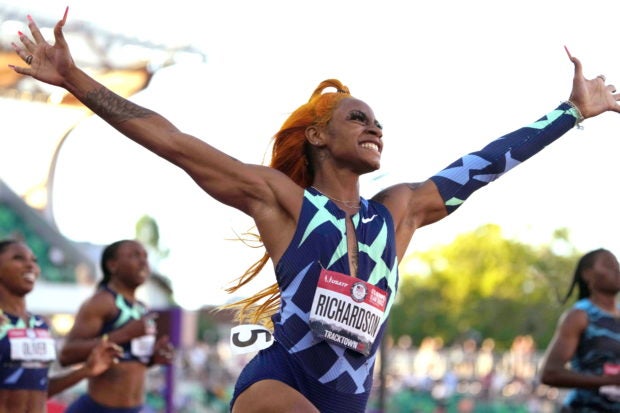 Sha’Carri Richardson celebrates after winning the women’s 100m in 10.86 during the US Olympic Team Trials at Hayward Field. (Kirby Lee-USA TODAY Sports)

KINGSTON, Jamaica  – American sprinter Sha’Carri Richardson, expected to be one of the biggest draws at the Tokyo Olympics, will miss the 100 metres at the Games after accepting a one-month ban for testing positive for cannabis during her U.S. trials victory in June.

The United States Anti-Doping Agency (USADA) confirmed the suspension on Friday, though the 21-year-old still has a chance of running in the Olympic relay events.

The positive test came at the U.S. Olympic trials when Richardson underlined her credentials as a serious gold medal contender by winning the 100m in 10.86 seconds.

The women’s 100m event in Tokyo starts on July 30, two days after Richardson’s ban ends but the adverse finding means her Olympic qualifying results at the trials, which offer automatic places to the first three qualified athletes in each event, are annulled.

“The rules are clear, but this is heartbreaking on many levels,” USADA CEO Travis Tygart said. “Hopefully, her acceptance of responsibility and apology will be an important example to us all that we can successfully overcome our regrettable decisions, despite the costly consequences of this one to her.”

Richardson said in an NBC Interview on the Today Show on Friday that her action came while she was dealing with the news of the death of her mother.

“Like I tweeted yesterday, I’m human. We are human, I want to be as transparent as possible with you guys whether it’s good, whether it’s bad,” she said.

“But there will never be a steroid attached to the name Sha’Carri Richardson. The charge and what the situation was was marijuana.”

USADA said that her ban was reduced to one month because she had used cannabis out of competition and it was unrelated to sport performance. She also successfully completed a counselling program regarding her use of the drug.

The ban could leave Richardson, the fastest American woman this year with a time of 10.72 seconds, clear to race in the 4x100m relay at the Olympics in the first week of August, if she is one of two athletes selected by USA Track & Field (USATF) on top of the first four trials finishers.

Sportswear maker Nike, which sponsors Richardson, said it would stand by her. “We appreciate Sha’Carri’s honesty and accountability and will continue to support her through this time,” it said a statement.

‘I HAVE PLENTY OF GAMES LEFT’

Questioned as to whether she was hoping to get a chance to compete in the relay in Tokyo, Richardson said: “Right now I’m just putting all of my time and energy into dealing with what I need to deal with to heal myself.

“So if I’m allowed to take that place (at the Olympics) I would be grateful for it but if not, right now I’m going to focus on myself.

“I’m 21, I’m very young. Unlike most, I have plenty of Games left in me to compete in and I have plenty of talent that backs me up because everything I do comes from me naturally, no steroid, no anything.

“This incident was about marijuana, so after my sanction is up I’ll be back and able to compete and every single time I step on the track I’ll be ready for whatever anti-doping agency to come and get what it is that they need.”

USATF said it would help Richardson with any mental health challenges. “Sha’Carri Richardson’s situation is incredibly unfortunate and devastating for everyone involved,” it added.

Cannabis is banned by the World Anti-Doping Agency (WADA) but if athletes can prove that ingestion is unrelated to performance, then a suspension of three months rather than the usual two or four years is imposed.

If an athlete is willing to undertake an approved treatment programme in collaboration with their national anti-doping body, then the ban can be reduced to one month.

Richardson was in Oregon when she used the drug, where it is legal. “I know what I did, I know what I’m supposed to do… and I still made that decision,” she said.

Richardson could also appeal any sanction to the Court of Arbitration for Sport (CAS), while the Athletics Integrity Unit (AIU) could appeal to seek a longer ban. An AIU spokesperson said that they had requested the case file from USADA but could not comment further until the relevant information has been considered.

Richardson was aiming to become the first American woman to win the Olympic 100m title since Gail Devers in 1996 after posting 10.72 seconds in April – one of her five runs under 11 seconds this season.

Her performances, brightly-coloured hair and self-confident statements have helped her attract a huge social media following, though she has also been criticized for working with coach Dennis Mitchell, the former Olympic 100m finalist and relay gold medallist who served a two-year ban for excess testosterone.