(FILES) This file photo taken on June 20, 2021 shows a view of the main dining hall of the Olympic Village during a media tour of the Tokyo 2020 Olympic and Paralympic Village in Tokyo. (Photo by Behrouz MEHRI / AFP)

Even under ordinary circumstances, feeding an Olympic Village is a mammoth task, with chefs preparing tens of thousands of meals a day for elite athletes from around the world.

But at Tokyo 2020, there’s an added pressure: strict coronavirus rules forbid athletes from eating at local restaurants, so it’s their only chance to sample Japan’s famous cuisine.

“I feel it’s a lot of responsibility for us,” admitted Tsutomu Yamane, senior director of Tokyo 2020’s food and beverages services department.

“We want them to enjoy (Japanese food)… but it’s major pressure,” he told AFP.

It’s a huge undertaking: the village can host up to 18,000 people at a time and its cafeterias will serve up to 48,000 meals a day, with some open around the clock.

So organizers will provide 700 menu options, 3,000 seats at the main two-story cafeteria and 2,000 staff at peak hours to meet the needs of all. 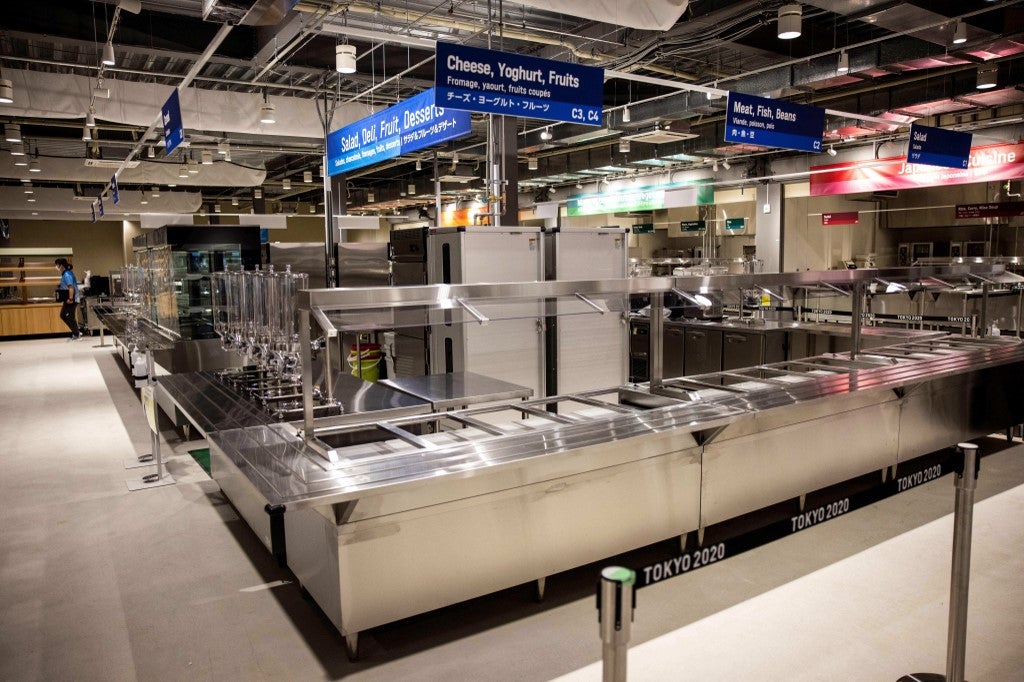 (FILES) This file photo taken on June 20, 2021 shows a view of the main dining hall of the Olympic Village during a media tour of the Tokyo 2020 Olympic and Paralympic Village in Tokyo. (Photo by Behrouz MEHRI / AFP)

And given Japan’s world-famous cuisine, there will be plenty of local flavor.

The focus will be on informal dishes rather than high-end dining, with ramen and udon noodles among the staples, said Yamane.

Always-popular ramen will be offered in two of its most famous broths: soy sauce, and miso — the fermented soybean paste that is central to Japanese cuisine.

But there may be one big disappointment for Japanese food fans: no sushi with raw fish. Safety rules mean rolls will only feature cooked shrimp, canned tuna, cucumber and pickled plum.

Two other favorites will be available though: grilled wagyu beef and tempura — battered, fried vegetables and seafood.

Some less familiar Japanese dishes will also be featured, including two specialties from the western Osaka region: okonomiyaki and takoyaki.

The former is a savory pancake cooked on a griddle that often contains cabbage and pork and is topped with a sweet sauce, mayonnaise, and bonito flakes. Takoyaki are small batter balls filled with octopus.

And there is Japanese home cooking, courtesy of locals who entered a competition to have their dishes featured.

Yoko Nishimura, a 59-year-old mother and housewife from Kamakura outside Tokyo, had almost forgotten about the competition after the Games was postponed.

“Then I was contacted and told I was chosen. I could barely believe it,” she told AFP.

She was inspired by the summer heat to create a dish of cold somen noodles topped with grilled salmon, steamed chicken, edamame beans, broccoli, plum paste and grated yam.

The dish, she said, “is full of things that are good for the body.” (FILES) This file photo taken on June 20, 2021 shows a view of coffee makers at the main dining hall of the Olympic Village during a media tour of the Tokyo 2020 Olympic and Paralympic Village in Tokyo.  (Photo by Behrouz MEHRI / AFP)

It uses “salmon with its skin on, which has great nutrients like collagen. The edamame beans are full of protein, and broccoli has antioxidants for your body.”

Other meals chosen include oden — a Japanese stew with a dashi broth base — and a panna cotta made from edamame.

Ingredients used will come from all 47 regions of Japan, including areas hit by the 2011 earthquake, tsunami and nuclear disaster, in keeping with the Olympics’ “Recovery Games” theme.

While some countries still restrict food from areas affected by the Fukushima nuclear accident, Japan says produce from the region is subject to stricter standards than those used elsewhere in the world and items are rigorously tested.

So while organizers will indicate the origins of food served in the casual dining area, there won’t be any specific labeling to mark out items from Fukushima.

Meals will cater to just about every religious and dietary restriction, including the first gluten-free section at a Games.

As with everything at the pandemic-postponed Olympics, the virus will cast a long shadow. Seating has been reduced and athletes must keep mealtimes as short as possible.

Nishimura is hopeful though that her dish will offer up something restorative.

“Athletes coming for the Olympics could lose their appetites because of the hot summer and training hard. They may also feel a lot of pressure from competing in such a big event,” she said.

“I would even say that eating this (dish) will let them compete in top condition.”

Take your condoms home: social distancing and sex in the Olympic village