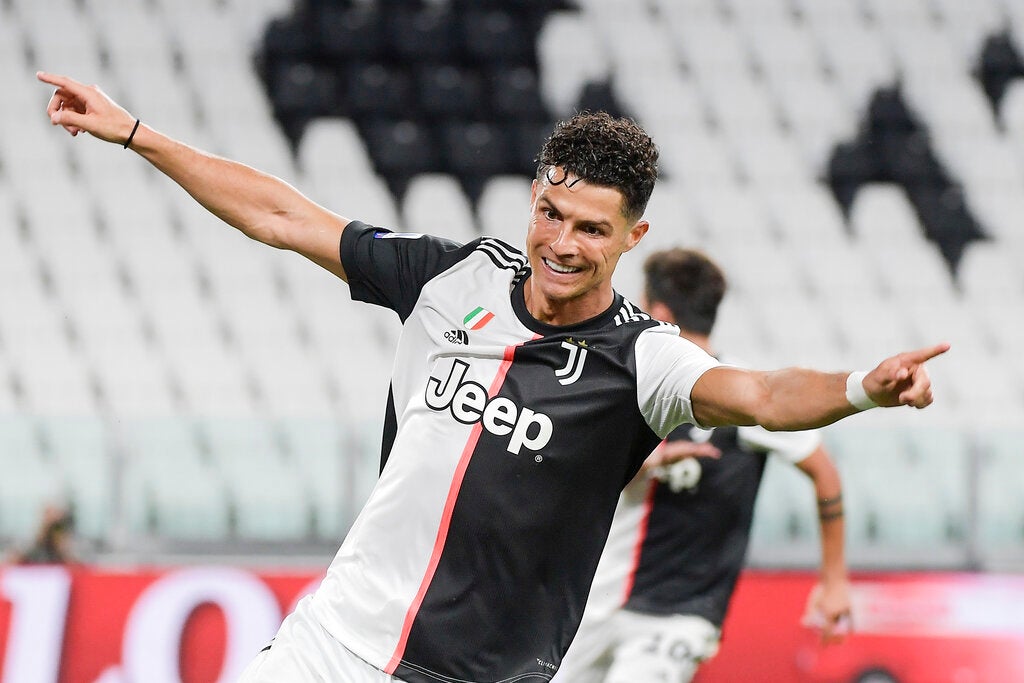 Juventus’ Cristiano Ronaldo celebrates after scoring during the Italian Serie A soccer match between Juventus and Lazio at the Allianz stadium in Turin, Italy, Monday, July 20, 2020. (Marco Alpozzi/LaPresse via AP)

Cristiano Ronaldo has given no indication he wants to leave Juventus and is expected back in Turin later this month, club director Pavel Nedved said on Wednesday.

“Cristiano is on holiday. We have no signal from his entourage that he wants to leave. We’re waiting for him and he will return around July 25 as scheduled,” Nedved said at the unveiling of the calendar for the 2021-2022 season.

The 36-year-old Portuguese international has one year left in his contract.

His future had been in doubt after a difficult campaign during which Juventus lost their Serie A crown after nine years, exited the Champions League in the last 16 and only sealed fourth place and elite European football on the final day.

Juventus opens next season at Udinese with Massimilano Allegri fired up as he returns as coach two years after being sacked despite winning five consecutive league titles with the Turin club.

“There was a certain routine with (Allegri) for five years,” said Nedved. “Then he went for two years to take a little holiday but now he’s back with great motivation.”

Former Czech Republic international Nedved agreed that Juventus had probably celebrated more at finishing fourth at the end of last season than winning the ‘Scudetto’ in 2020 with Maurizio Sarri.

“I think it’s true when Sarri says we didn’t celebrate that Scudetto very much, because perhaps it came naturally as we had already won so much.

“We tried again with Andrea Pirlo (coach last season), but we ended in fourth. We celebrated that achievement after a complicated season perhaps more for the many sufferings.”

Nedved confirmed that the club was interested in Sassuolo midfielder Manuel Locatelli after his performance with Italy in winning Euro 2020.

“We left the boy quiet during the European Championship. He is a Sassuolo player and there will be time to address the issue.”

3 years, 3 Euro failures: What now for Ronaldo and Juventus