Japan’s gymnastics great out of Olympics after horizontal bar flop 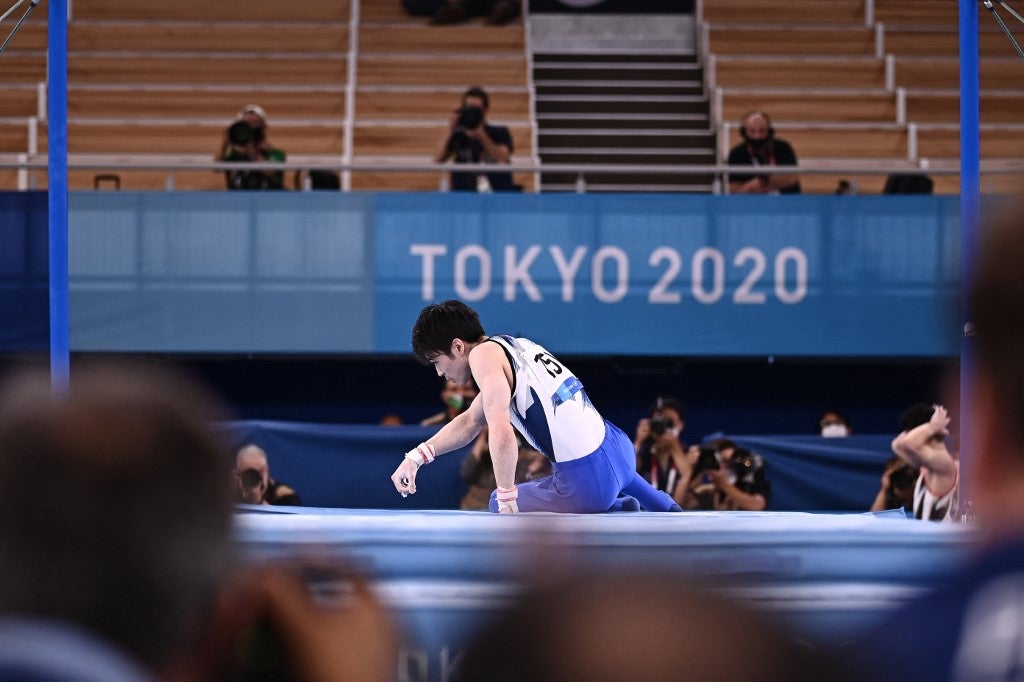 Japan’s Kohei Uchimura reacts after competing in the horizontal bars event of the artistic gymnastics men’s qualification during the Tokyo 2020 Olympic Games at the Ariake Gymnastics Centre in Tokyo on July 24, 2021. (Photo by Lionel BONAVENTURE / AFP)

Japanese gymnastics star Kohei Uchimura crashed out of the Tokyo Olympics on day one Saturday when he was eliminated from the horizontal bar competition and did not compete in the parallel bars.

The all-around 2012 and 2016 Olympic champion, who was due to retire after the Games, lost his grip during his horizontal bar routine and failed to qualify for next week’s final.

The 32-year-old chose not to go for a third successive all-around title following persistent shoulder problems.

Regarded as one of the greatest gymnasts of all time, “King Kohei” also has 10 world titles.

He was penalized for his fall at the Ariake Arena, picking up just 13.866 points, robbing him of the chance to end his decorated career on a golden high on home soil. After scraping through to get onto the Japanese team, Uchimura had been reveling in competing at the pandemic-delayed 2020 Games.

After training this week he said: “I love it, especially because it’s in Japan. This is my fourth Olympics, and this is probably the best one yet.”

After a challenging routine, it all went horribly wrong when he lost his grip, crashing to the mattress and walking off dejectedly.

He had etched his name into Olympic history at the Rio Games in 2016, becoming the first male gymnast in 44 years to retain his all-around title.

He also led Japan to team gold in Brazil, cementing his place as one of his country’s most revered athletes.

Uchimura has struggled with injuries since Rio, rating his prospect of making it to Tokyo “a fairytale” in 2019.

The gymnast, who recently described himself as “an ancient fossil,” had taken radical action, dropping every event but the horizontal bar — he was a surprise late entry for the parallel bars but did not take up the option.