Irish Magno (right) scores with a shot to the face of Kenya’s Christine Ongare. — PHOTO FROM AFP

TOKYO–Under heavy fire from Irish Magno’s “bread-and-butter” game plan—a pattern of attack schemed by coaches off detailed scouting to open up shots to the body and the head—Kenya’s Christine Ongare was toast.

Magno was everywhere on Sunday, smothering her higher-ranked foe with crisp, jarring shots on the ring of the Kokugikan Arena here and mending hearts broken by a painful defeat Team Philippines suffered the night before.

Half of what she accomplished in the Tokyo Olympics women’s boxing flyweight preliminaries was relatively easy.

“We scouted her opponent two nights ago and developed some tactics, and she was pretty much comfortable with it,” said boxing head coach Don Abnett. 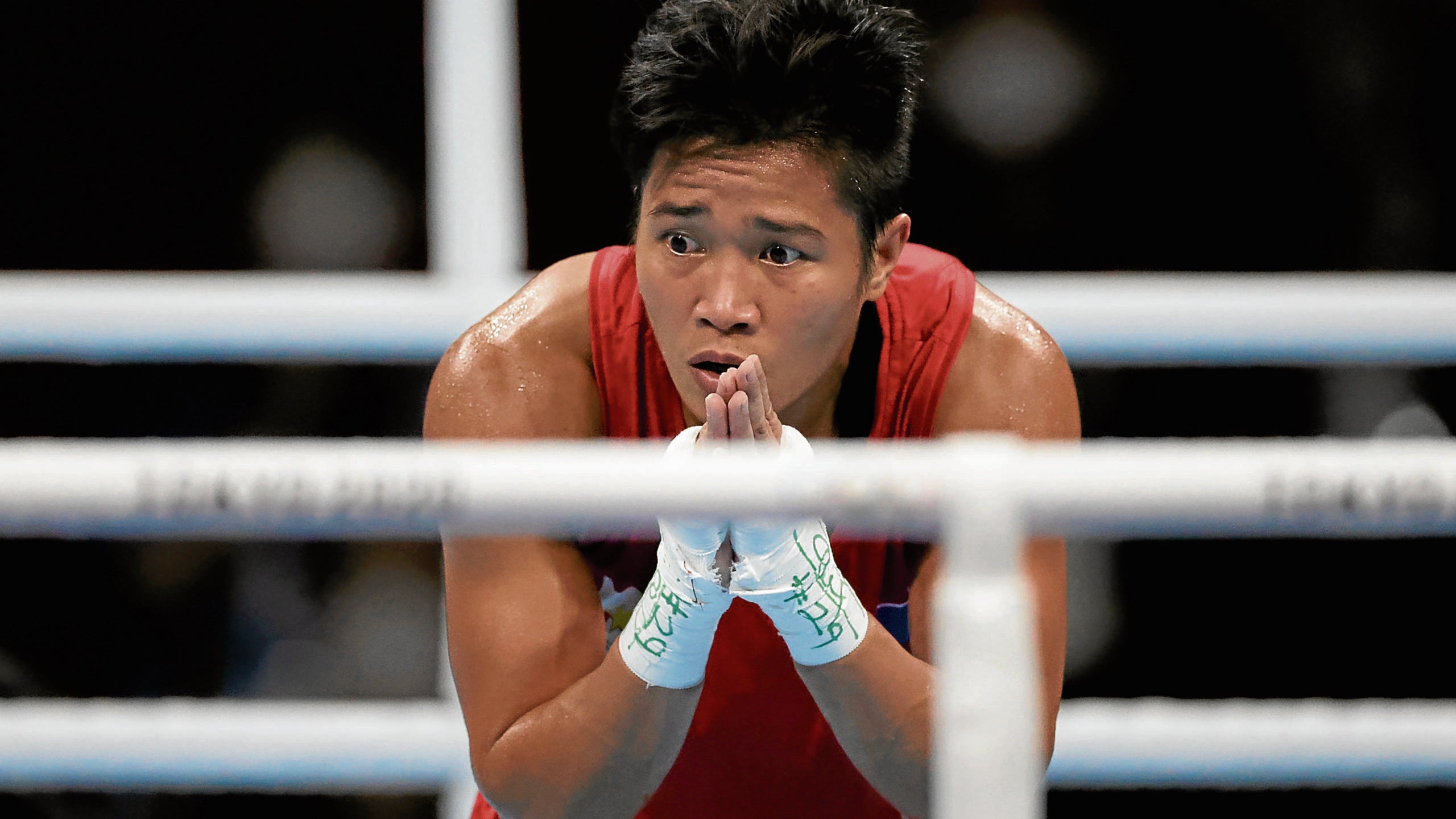 The second part, the salvaging of a morale bruised by gymnast Carlos Yulo’s shocking exit in the floor exercise preliminaries the night before, was a little bit harder. And likely aware of the implications of her victory for an Olympic delegation that had just lost its brightest hope of ending a tiring gold-medal wait, Magno chose to tie down potentially soaring expectations.

“Let’s take this step by step.”

On the ring, Magno did it punch by punch, stepping in and out of Ongare’s range and never giving her opponent a chance at all. The Filipino won all the rounds on all the judges’ scorecards—with one giving her a 10-8 in the third.

“She stayed in and out of [Ongare’s] punching range and delivered ‘bread-and-butter’ strikes—jabs and straights,” Abnett said. The jab-straights to the body and head kept Ongare exposed, allowing Magno to feed her with vicious crosses.

Up next for Magno is Jutamas Jitpong of Thailand, who was the last boxer the Filipino beat in the 2019 Southeast Asian Games. Magno eliminated Jitpong in the semifinals before eventually losing to Vietnamese Nguyen Thi Tam in the final.

Cris Nievarez, who became the first Filipino rower to make it to the quarterfinals of the Summer Games, jumped off to a fast start in the men’s single sculls and was briefly among the leaders before fading on the way to elimination at Sea Forest Waterway.

This is not the end of their Olympic journeys, however.

Like the 21-year-old Yulo, Nievarez, also 21, and Valdez, 25, have gained valuable experience enough for them to recalibrate their plans and refocus their sights on Paris 2024.

While Magno’s win certainly kickstarted a stalled medal engine, an Olympic silver medalist, a reigning world champion and an Asian champion hope to get the motor humming again on Monday, when the country steps up its drive for gold here.

That was also before much of the load of golden hopes were put on the shoulders of the diminutive Yulo.

Skateboarding’s Margielyn Didal, the Asian Games gold medalist for the street discipline, is also being counted on heavily to deliver a medal despite the throng of world-class skateboarders she will face, but the Cebu lass has taken a chill approach to her bid.

“Skateboarding’s not about how good or bad you’re skating, as long as you’re enjoying it,” Didal said via flash quotes provided by Games organizers. “For this, the Olympics, the first one that will be in the history books, like there’s a lot of good competitors, but I’m just going to try to enjoy it and cherish every moment of this contest.”

Reigning women’s featherweight champion Nesthy Petecio climbs the ring anew as she hopes to follow up on her opening-day victory when she battles dangerous Taiwanese Lin Yu-Ting, the current world No. 1.

Petecio, ranked No. 7, will be a big underdog in the match, but her coaches hope that a much-improved performance from her first bout will allow her to sail through.

Petecio has at least one thing going for her: In a training camp in Thailand, she sparred with a Thai boxer with a style similar to that of Lin. And although there were mixed results during those sparring sessions, in the end, head coach Abnett said, Petecio “got it right.”