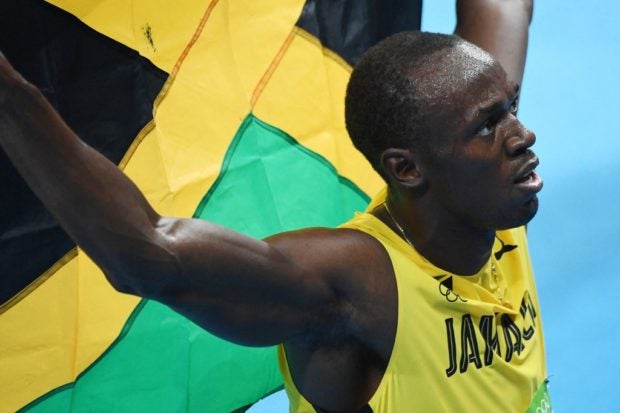 In this file photo taken on August 18, 2016 Jamaica’s Usain Bolt holds up a flag as he celebrates after winning the Men’s 200m Final during the athletics event at the Rio 2016 Olympic Games at the Olympic Stadium in Rio de Janeiro.  (AFP)

TOKYO, Japan – Usain Bolt may have hung up his spikes in 2017, but the Tokyo Olympics are the first summer Games in 17 years not to feature the incomparable Jamaican sprinter.

In his absence, a raft of up-and-coming track and field stars headlined by Swedish pole vaulter Armand Duplantis, US sprinter Noah Lyles, and recent 400m hurdles world record setters Karsten Warholm and Sydney McLaughlin head to Japan looking to build their own legacy.

There is no doubt that the sport has struggled to fill his sizeable spikes.

So it is a tragedy that the 10 days of athletics starting in Tokyo on Friday will take place without spectators due to anti-Covid-19 measures, because they feature a group of young stars more than capable of taking up at least some of Bolt’s mantle. 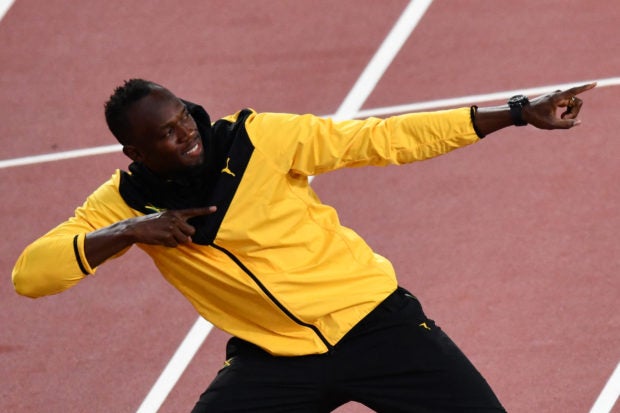 Jamaica’s Usain Bolt poses as he takes part in a lap of honour on the final day of the 2017 IAAF World Championships at the London Stadium in London on August 13, 2017. (AFP)

Adding to the excitement, advances in running shoe technology have ushered in a bevvy of middle- and long-distance specialists set on hunting world records whenever they take to the track.

Duplantis has taken the men’s pole vault into another stratosphere by setting not only a new world record of 6.18m indoors last year, but also vaulting 6.15m outdoors to finally improve by a centimentre Sergey Bubka’s previous best set in 1994.

“Winning is the only goal really,” the 21-year-old said when asked whether more records were the target in Tokyo.

“In a dream world I would like to go and break the world record and do something very legendary at the Games. But it’s my first Games, I just want to win, that’s the only thing on my mind.”

The 400m hurdles is set to be one of the stand-out track events for both men and women, after Norway’s Warholm and American McLaughlin both posted new world records in the run-in to Tokyo.

Both have close rivals breathing down their necks in the shape of American duo Rai Benjamin and reigning world and Olympic champion Dalilah Muhammad.

Trayvon Bromell is bidding to become the first US sprinter to win the Olympic men’s 100m since Justin Gatlin in 2004 — and for once, there is no serious Jamaican threat.

In contrast, in the women’s event Shelly-Ann Fraser-Pryce is bidding to win gold for Jamaica for the third time.

Lyles is focusing on the 200m, although he will face stiff competition from compatriot Erriyon Knighton, whose 19.88sec in May at the age of just 17 broke two world 200m age-group bests previously held by Bolt.

Warholm’s Norway teammate Jakob Ingebrigtsen, just 20, is now a genuine rival to the strong east African contingent with his fast finish after setting European records at 1500m and 5,000m and collecting continental titles.

“My goal is long term, I want to be able to win gold in major championships,” he said.

“Last season was not about winning but about running fast. This year is the other way around for Tokyo. I need to make sure I will be at my best in Tokyo.”

Middle- and long-distance races at global championships rarely produce records as they tend to be more tactical.

But the technological advances in running shoes means no record is safe at the moment, at least not in the presence of the likes of gung-ho Dutchwoman Sifan Hassan, who will attempt an unprecedented treble of 1500m, 5,000m and 10,000m.

Just 18 gold medallists from the 43 individual events contested at the Rio Olympics five years ago will be in Tokyo.

The likes of world 800m champion Donavan Brazier of the USA and Olympic 110m hurdles champion Omar McLeod of Jamaica missed out on selection, while other stars, such as world and Olympic triple jump champion Christian Taylor, are sidelined with injury.

The US team boasts 35-year-old veteran Allyson Felix, who will become the most decorated female track and field athlete in the history of the Games should she add to her nine-medal haul in her fifth Olympics.

Read Next
Lillard says no panic on Team USA after shock defeat to France
EDITORS' PICK
Red-tagged green activist recalls imprisonment
A laptop that maximizes your WiFi so you can maximize your productivity
‘FPJ’s Ang Probinsyano’ officially ends after nearly 7 years
House energy committee chair Arroyo bats for cheap electricity
Authors unbowed after gov’t ‘purge’ of books
Powered by style, innovation and passion
MOST READ
Arjo Atayde reveals proposal to Maine Mendoza was ‘more than a year’ in the making
‘FPJ’s Ang Probinsyano’ officially ends after nearly 7 years
Man, girlfriend found dead in Leyte river
Police hunt down farmer for slay of soldier in Samar
Don't miss out on the latest news and information.