Hidilyn Diaz and Team HD saw the immediate need to go back to the drawing board after winding up medal-less in the Asian weightlifting championships in Tashkent three months ago, a total letdown as seen by folks back home after all the hype built around her for being an Olympic gold medal hope.

After that, the rest, as they say, is history made at the Tokyo Games.

And because of that, the windfall hasn’t stopped for the 30-year-old Zamboanga native, who on Thursday got another P5 million in incentives from the Philippine Sports Commission (PSC) for establishing an Olympic record in the women’s 55-kilogram class.

Diaz, who said she wasn’t “emotionally and mentally prepared” when she set foot on the Asian Championship stage, set the Games’ standard with a 127-kg lift in the clean and jerk for a 224-kg total.

“I wasn’t mentally and emotionally prepared during the Asian championships. I learned a lot from that experience, so Team HD came up with a strategy that later on proved successful,’’ Diaz told Focap Online News on Thursday in Filipino. 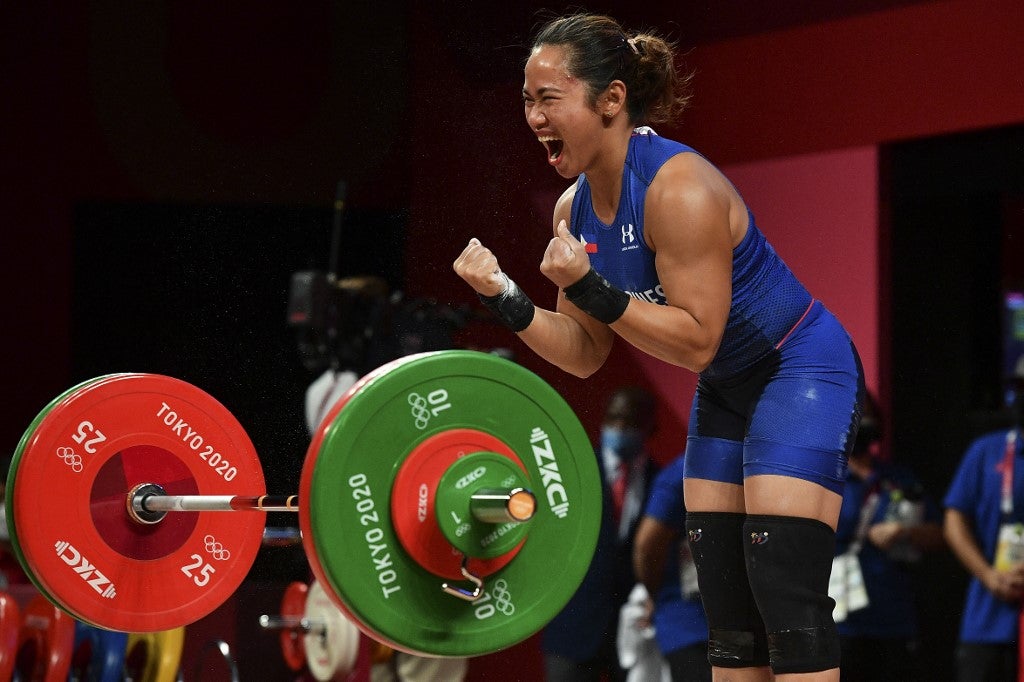 Philippines’ Hidilyn Diaz reacts while competing in the women’s 55kg weightlifting competition during the Tokyo 2020 Olympic Games at the Tokyo International Forum in Tokyo on July 26, 2021. (Photo by Vincenzo PINTO / AFP)

Under Republic Act No. 10699, national athletes who surpass a Philippine record or ranking in any measurable international sports competition shall be given cash incentives, the amount of which may be determined by the PSC.

Diaz was able to lift 118 kg in the clean and jerk during the Asian champs in Uzbekistan three months ago and missed standing on the medal podium after also placing fourth in the snatch and total.

“I had no exposure for 15 months when I competed in the Asian championships. Those were anxious times for me,” said Diaz.

PSC commissioner Celia Kiram confirmed that the additional incentives have already been approved, signed and ready for release.

Hidilyn will bag Tokyo slot just for showing up at Tashkent