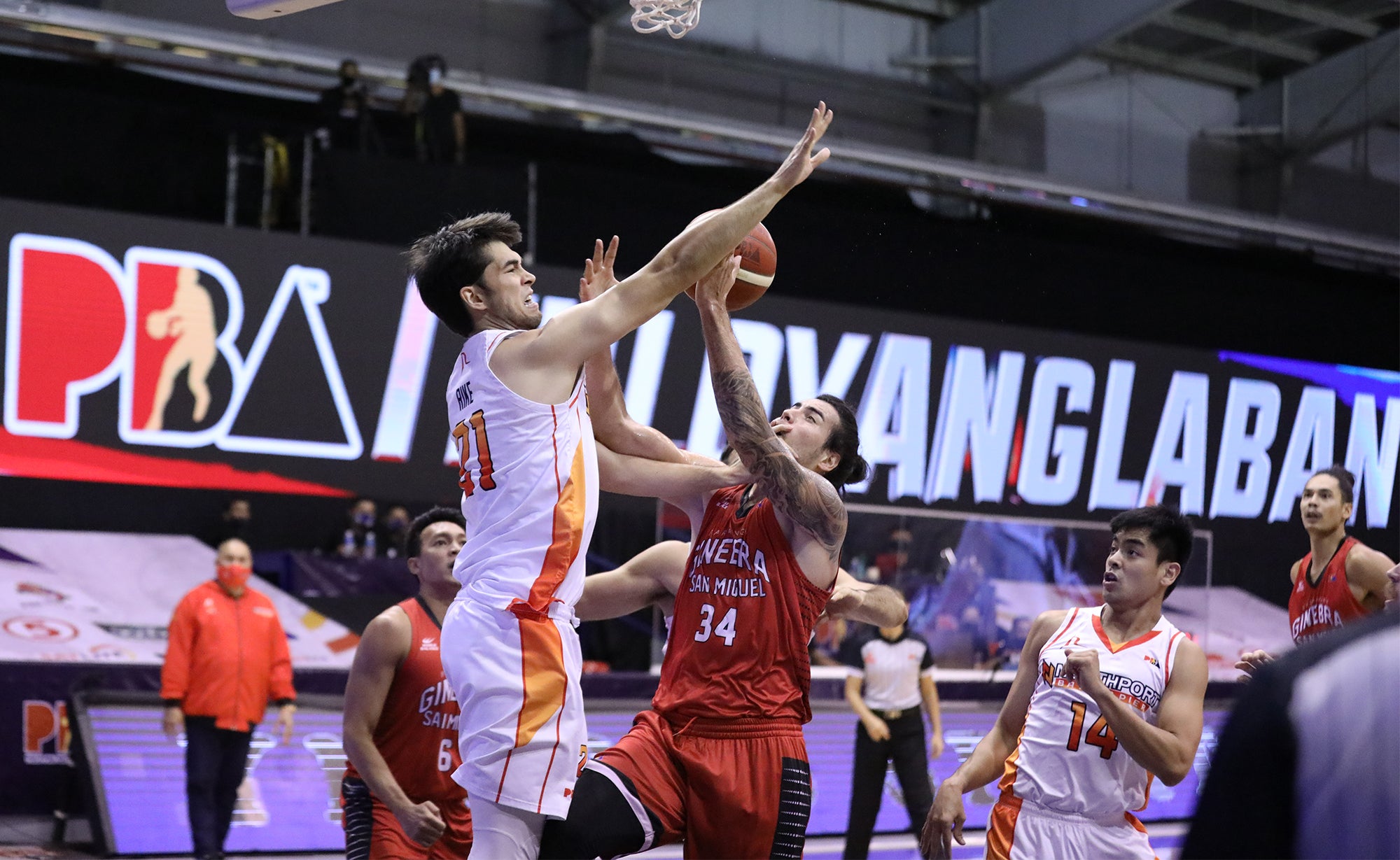 MANILA, Philippines–Looking dead in the water in the dying seconds of the contest, Barangay Ginebra’s two frontline stars conspired for back-to-back plays to lift the Gin Kings to a pulsating 87-85 victory NorthPort on Friday night.

Christian Standhardinger scored on an off-balanced put-back at the buzzer to help the defending champions even their slate to 2-2 in the PBA Philippine Cup elimination at Ynares Sports Arena in Pasig City.

Such a sequence, however, would have not been possible without Japeth Aguilar’s block on Jamie Malonzo’s breakaway dunk attempt eight seconds earlier.

“It looked pretty bleak there,” coach Tim Cone said shortly after the contest.

“It looked pretty bleak and looked like we were gonna lose the basketball game … But then Japeth hustles down, comes out of nowhere, and blocks the [dunk].

CHRISTIAN STANDHARDINGER FOR THE WIN!

The Gin Kings played catch-up pretty much all night, staring at deficits as big as 13 points.

LA Tenorio came through down the stretch, uncorking 10 of his 24 points in that period as he backstopped Stanley Pringle’s team-best 24.

Robert Bolick led the way for NorthPort with 23 points, as Greg Slaughter and Jerrick Balanza—two former Gin Kings—chipped 14 or more in the stand that would’ve put the Batang Pier back to the win column. Instead, they slid to 1-3.

Cone rued Ginebra’s continued struggles in the conference but expressed delight over his charges’ resilience—especially when it mattered most.

“We got off to a poor start, as we’ve been doing in all of our four games. We really got to look at that and figure out what we’re doing wrong there,” he said.

A timely reminder for the reigning champions as they go up against the rejuvenated San Miguel Beer this Sunday.

Meanwhile, the PBA announced later that night that it has scratched the Blackwater-Phoenix tussle scheduled for Saturday, 2 p.m.

The league said it will postpone the match to a later date “in accordance to its health and safety protocols.”

The clash between Alaska and Meralco, two teams hitting their stride early in the All-Filipino, will push through at 4:30 p.m.

Read Next
PBA: Fresh from quarantine, TNT takes down Rain or Shine
EDITORS' PICK
House energy committee chair Arroyo bats for cheap electricity
Palace warns sugar hoarders after raid on Pampanga warehouse
What to watch out for when selecting a video surveillance solution
Look Through: The fate of impounded stray dogs
Metro Manila’s COVID-19 cases on downward trend, but surge not over — OCTA
Unleash the photographer in you this World Photography Day with vivo smartphones
MOST READ
DOJ indicts bank officer in $2.1 billion Wirecard fiasco
Vice Ganda dismisses rumors he broke up with Ion Perez: ‘Masaya kami’
PNP bars US legislators’ visit to De Lima due to lack of authority from court
Palace warns sugar hoarders after raid on Pampanga warehouse
Don't miss out on the latest news and information.