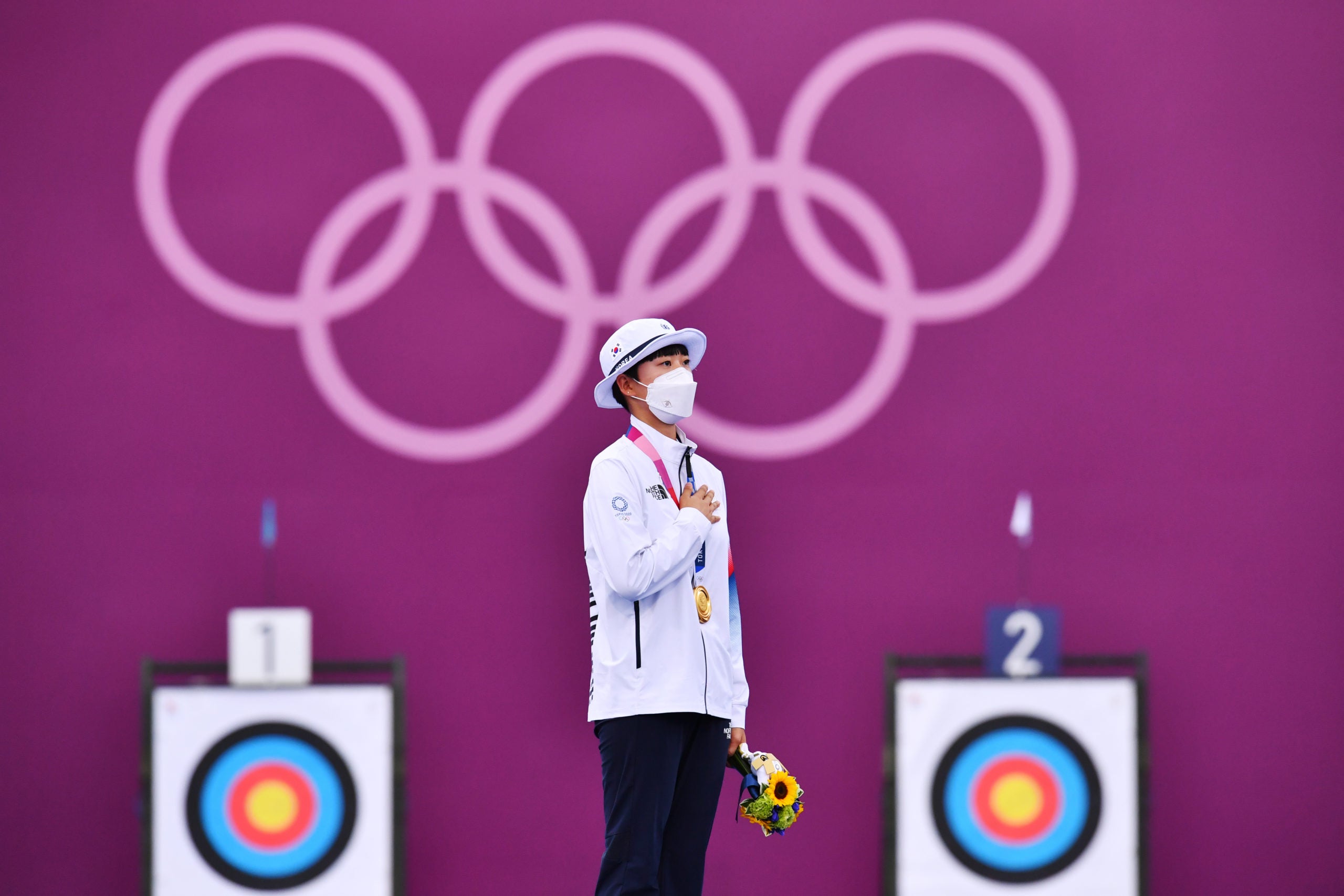 Gold medalist An San of South Korea stands on the podium to her national anthem after the Tokyo Olympics gold medal ceremony in archery. REUTERS/Clodagh Kilcoyne

South Korea’s An San was ice-cool as she defied online sexist abuse to seal a hat-trick of gold medals at the Tokyo Olympics, but the ace archer has been fighting discrimination since she was a child.

She is the first South Korean to win more than two medals in a single Summer Games. She is also the first woman since 1904 to win three golds in archery at the same Olympics.

Not bad for someone who only turned 20 in February, was competing at the Olympics for the first time and was once told to move schools if she wanted to do archery as a girl.

When An first made headlines last week it was not just because of her startling achievements in Tokyo.

Rather, it was because she was on the end of online abuse from some South Korean men about her short hair, which in turn triggered an outpouring of support from women infuriated at her treatment.

An’s male detractors said her hairstyle suggested she was a feminist and some demanded that she apologize — and even give back her Olympic medals.

But she brushed off the online hate to win gold number three on Friday, this time in a last-gasp shootoff in the individual category.

In a statement, she said she “tried not to care” and instead focus on her sport.

The archers’ heart rates, broadcast for the first time at an Olympics, showed An’s peaked at 119 beats per minute — far below the 167 bpm of her Russian opponent Elena Osipova.

It was more evidence of An’s remarkable calm under pressure, but she admitted afterwards: “When it was all over, I felt like my heart was going to explode.” South Korea’s An San competes in the women’s individual eliminations during the Tokyo 2020 Olympic Games at Yumenoshima Park Archery Field in Tokyo on July 30, 2021. (Photo by ADEK BERRY / AFP)

An’s journey to the top has been far from easy.

She started archery in primary school, initially because — according to reports in South Korea — it came with the offer of free fried chicken.

The school team, newly formed at the time, was only for boys, but the young An insisted she also wanted to learn.

At first, the school principal advised her to move to another school if she wanted to do archery, coach Kim Seong-eun told South Korean radio.

But An would not cave in and eventually the school founded an archery team for girls because of her, said Kim.

The team is still going strong to this day, a legacy of An’s refusal to take “no” for an answer.

Kim said that An is usually “very cheerful and has a funny sense of humor,” but becomes extremely composed — and even cold — when competing.

In 2018, while still in high school, An told a TV reporter that she hoped to become an athlete well known by everyone, “including those who don’t know about sports at all,” on a par with South Korea’s Olympic champion figure skater Kim Yuna.

“It looks like San’s wish has come true today,” her tearful mother, Koo Myung-soon, said after watching her daughter collect her third gold on television.