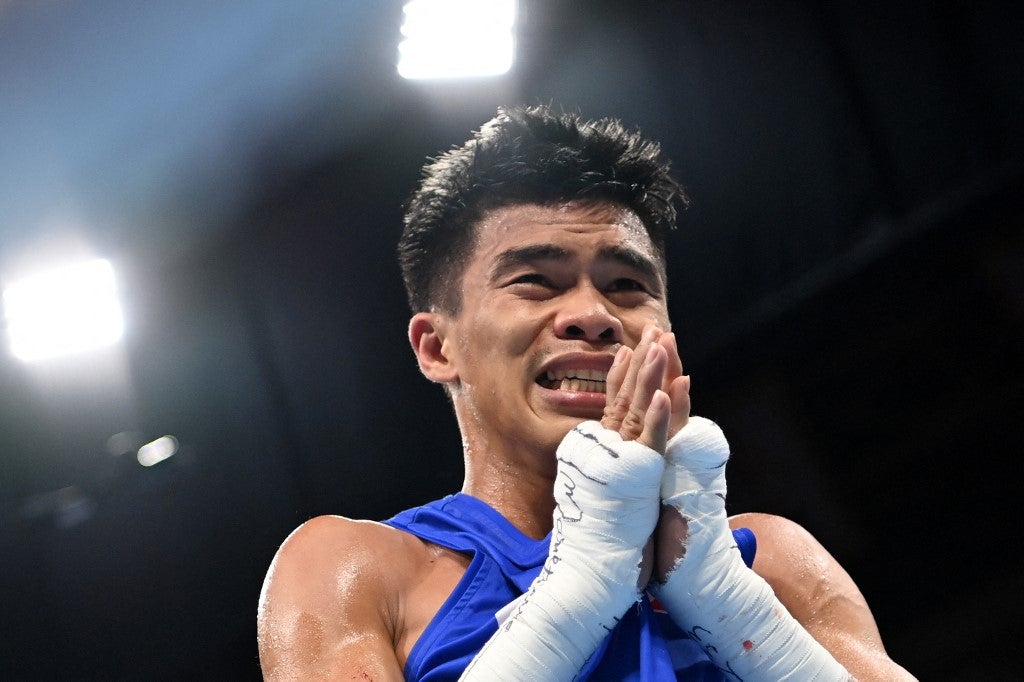 MANILA, Philippines–Carlo Paalam pulled off a mighty upset after knocking Olympic champion Shakhobidin Zoirov off his perch to become the Philippines’ latest medalist at the Tokyo Olympics on Tuesday.

Paalam punched his way through the men’s flyweight semifinal via split decision after the fight was stopped at the 1:40 mark of the second round following a clash of heads.

“I did not mind the punches I took, I just really wanted to win. My opponent is really good and he has experience too. They said the chances were 50/50, but I just trusted myself and I listened to my coaches,” Paalam said in Filipino.

Paalam’s stunning win guaranteed himself at least a bronze medal, pushing the Philippines’ medal total to four which is the country’s most ever in a single Olympic campaign.

Four judges favored Paalam in the scorecards while the other had it a draw.

Zoirov, who dominated the division in Rio 2016 to win the gold for Uzbekistan, entered the bout against Paalam with a pair of 5-0 decisions in his first two fights.

But a relentless Paalam was clearly unfazed as he brought the fight to Zoirov, who also has a gold in the 2019 World Championships in his colorful resumé, from the opening bell.

Paalam battles for a spot in the gold medal match against hometown bet Ryomei Tanaka on Thursday at 1:30 p.m.

The 27-year-old Tanaka, whose brother Kosei is a three-division world champion, beat Colombia’s Yuberjen Martinez Rivas in the semifinals, 4-1.

The Bukidnon-born Paalam joined Nesthy Petecio and Eumir Marcial in securing a medal for the country’s boxing team, which is in the middle of its best Olympic run yet after suffering a string of heartbreaks and disappointments in the Summer Games.

Petecio fights for the women’s featherweight gold later at 12:05 p.m. against familiar hometown bet Sena Irie while Marcial shoots for a spot in the final on Thursday against Ukraine’s Oleksandr Khyzhniak in the middleweight semifinal.

Read Next
Lakers invite Dwight Howard, Trevor Ariza to return
EDITORS' PICK
Mobile COVID-19 vaccination for commuters, transport workers set at PITX
Gear up and get ready to play with Yamaha Mio Gear
Acer starts the year off strong with the Aspire Vero National Geographic Edition
Kalinga, Ifugao, Mt. Province, N. Samar will be under Alert Level 4 from Jan 21-31
PH to send 584 athletes, 161 officials to Vietnam SEA Games
SSS: Members on home quarantine due to COVID-19 can apply for sickness benefit
MOST READ
Imelda Marcos trends on Twitter after octogenarian jailed for allegedly stealing mangoes
Mayor Vico counters vice mayor: ‘Did I say anything about his family?’
Municipal court in Pangasinan sets arraignment for ‘Lolo Narding’
Villar backs implementation of EDSA decongestion blueprint
Don't miss out on the latest news and information.