Hidilyn Diaz would forever be known as the Filipino to achieve what many is calling the most significant feat in Philippine sports history—winning the country’s first ever Olympic gold medal. She brings home the coveted and elusive Gold, from the world’s most famous sports competition, for a country which has been trying for the last 97 years.

The journey to that Olympic podium wasn’t easy, Diaz said so herself. Like many Filipino athlete, she had to face—and overcome—many challenges and trepidation over the years for the sports—weightlifting—that would later bring honor to the country.

Training for the Olympics is already hard. But the COVID-19 pandemic brought unprecedented trials to Diaz and her team. The biggest hurdle was getting through an additional 15 months of training because of the postponement of the Tokyo 2020 Olympics itself, which was supposed to be held last year.

There were even doubts if the Games itself would be held at all, with protests in Japan calling for its cancellations for fear of being a COVID-19 super spreader event. For an athlete, this is simply mentally devastating. 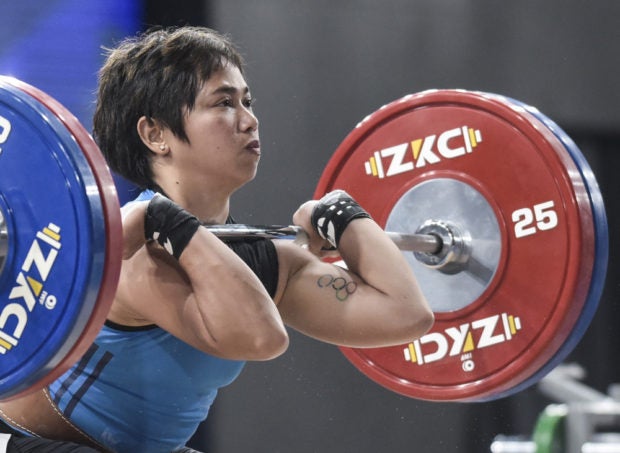 Diaz and her team, which the Olympian refers to as Team HD, was stuck in Malaysia for months, again, because of lockdown restrictions. With limited access to gyms, she and her team was forced to be creative, using water jugs attached on either end of a bamboo stick as weights.

Being stuck in another country also meant she was away from her family—her biggest support system—for a very long time, which is another mental struggle she had to contend with.

And that’s just the start of it. Diaz also struggled with funding her training for years, famously airing her thoughts about it on social media, which irked some officials who thought she was being too much of a diva. She was not. She was simply asking for help because she wanted to bring home that gold medal as much as, if not more than, any Filipino athlete.

Diaz was no stranger to overcoming struggles. From the start, her sporting career was fraught with challenges.

The Zamboanga native first joined the Olympics when she was only 17 years old, competing in the sport’s 58kg division in Beijing, China, in 2008. It was not a remarkable debut as she failed to bring home any medal.

With a Southeast Asian Games silver under her belt, Diaz headed to the next Olympic Games in London four years later in 2012 as a more experienced weightlifter. Unfortunately, she recorded a DNF in the same category when she failed to lift the 118kg in three attempts in the clean and jerk.

Diaz’s big break came during her third appearance at the Olympics. In 2016, Diaz took home the silver medal in the 53kg division in Rio de Janeiro. This was when people started to really pay attention to the potential that she was slowly realizing.

After becoming an Olympic silver medalist, Diaz found more success in the sport. She became the first weightlifter to win gold in the Asian Games in 2018. In the SEA Games in 2019, she also took home the gold. Diaz also pocketed silver medals in the 2017 Asian Indoor and Martial Arts Games, as well as in the 2019 Asian Championships. She upped her medal count with two more bronze finish in the World Championships.

Fast forward to today where Diaz has become a household name after her stunning win at the Tokyo 2020 Olympics last month. Not only did she win the top prize, her final lift is an Olympic record-setting 127kg attempt. Oh, and she beat China’s Liao Qiuyun. So there’s that, too.

After all is said and done, the best thing about Diaz’s win (aside from the pile of gifts and monetary incentives she received, of course) is that the 30-year-old weightlifter is only getting started. It’s obvious that Diaz has more glory to bring for herself and the whole nation. Perhaps more Olympic gold medals in a different category, or maybe she’ll beat her own record. Whatever it is, it’s going to be awesome.

Diaz is a proud Alaxan ambassador since 2016, one of the first few brands who saw and believed in her potential. She is the only weightlifter in the brand’s roster of ambassadors. As a face of the Alaxan brand, she lives by the brand’s tagline, “Laban lang.”

Her physical strength, apart from her values in life and indomitable spirit, has earned her millions of admirers. Her determination and focus resemble that of a true warrior. Despite innumerable struggles through the years, she did not quit and evidently fought for her dreams—to being an Olympic Gold medalist.