France’s Rudy Gobert (L) celebrates a play with teammates during the men’s preliminary round group A basketball match between France and USA during the Tokyo 2020 Olympic Games at the Saitama Super Arena in Saitama on July 25, 2021. (Photo by Aris MESSINIS / AFP)

France coach Vincent Collet says his team will bring “fire and energy” to the men’s Olympic basketball final Saturday as they target a second straight upset of three-time defending champions the United States.

Spearheaded by NBA stars Rudy Gobert and Evan Fournier, the French stunned Gregg Popovich’s USA in the opening round of group play at Saitama Super Arena 83-76.

It was the Americans’ first defeat at an Olympics since the 2004 Athens Games and while Collet admits the US have upped its game since, he remains confident.

“I think and I hope we will be ready Saturday,” he said, after his seventh-ranked team scrapped past a valiant Slovenia 90-89 in a breathless semi-final, where captain Nicolas Batum made a game-saving block at the buzzer.

“I know Team USA is favoured, but I hope we will play against them with the same fire and the same energy.

“We know what they are capable of. We will play this final with a lot of confidence.”

The two teams will meet for the eighth time at an Olympics and their third final after London in 1948 and at Sydney 2000, with the US winning on both occasions.

In fact, France’s only Olympic win against Team USA was its most recent in Japan, when sensational Boston Celtics shooting guard Fournier scored 28 points. His tournament tally now stands at 96.

He is understandably wary of the US threat, but said anything could happen.

“They don’t have much experience together as a team, but the more matches they play, the more they find their rhythm,” said Fournier. “We saw a bit of what they did against Australia (in the semi-finals).

“What matters is to take the match as it comes. It’s a final, anything can happen.”

An authoritative Kevin Durant scored 23 points and nine rebounds to power the US past Australia 97-78 on Thursday, recovering from a 15-point deficit to stamp its authority on the game.

Popovich admitted the team’s defensive effort early on was “pretty poor”, which carried over to the offensive end. But he praised his team for fixing the errors. 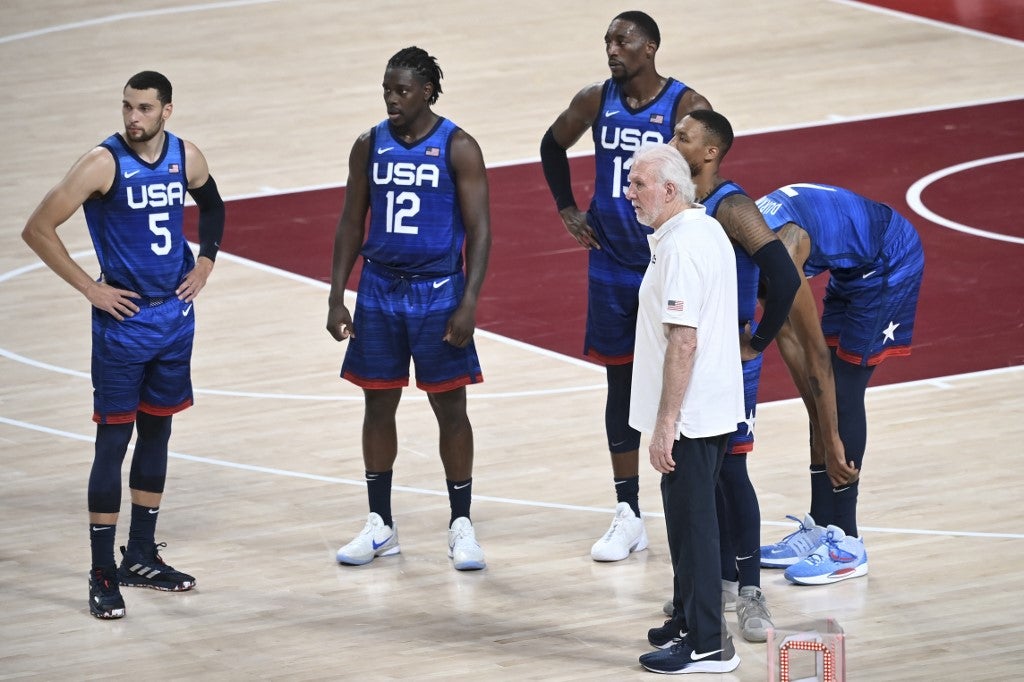 USA’s coach Gregg Popovich talks to his players during a time out in the men’s preliminary round group A basketball match between France and USA during the Tokyo 2020 Olympic Games at the Saitama Super Arena in Saitama on July 25, 2021. (Photo by Aris MESSINIS / AFP)

“I give them credit for understanding the game as well as being able to accept the truth,” said the veteran coach.

“Because you can be with some players that you can tell them something, but they don’t buy it because they can’t handle certain kinds of criticism. But these guys want the truth, and they react to it.”

The US is gunning for not only a fourth consecutive title but its 16th gold overall, having medaled in every Olympic basketball tournament they have competed in.

Other than the Americans, only the Soviet Union (twice), Yugoslavia and Argentina have ever won gold.

Brooklyn Nets’ Durant has once more been the team’s backbone and he could join Carmelo Anthony as a three-time title winner, having already surpassed his fellow great during group play to become their all-time leading Olympic point scorer.

“It is a different experience, different teammates,” Durant said of how Japan compared to his other gold medal successes. “But the journey has been fun so far, and we are looking forward to this opportunity.”

Durant scored 30 points in each of his last two gold medal games, signaling how crucial he is to pacing their offense.

“I’m looking forward to going out there and executing the game plan on defense. Offensively, I’m not worried about that,” he said.

“But just executing the game plan defensively as a team, and we’ll see what happens.”

France to face US in Olympic basketball final after beating Doncic, Slovenia