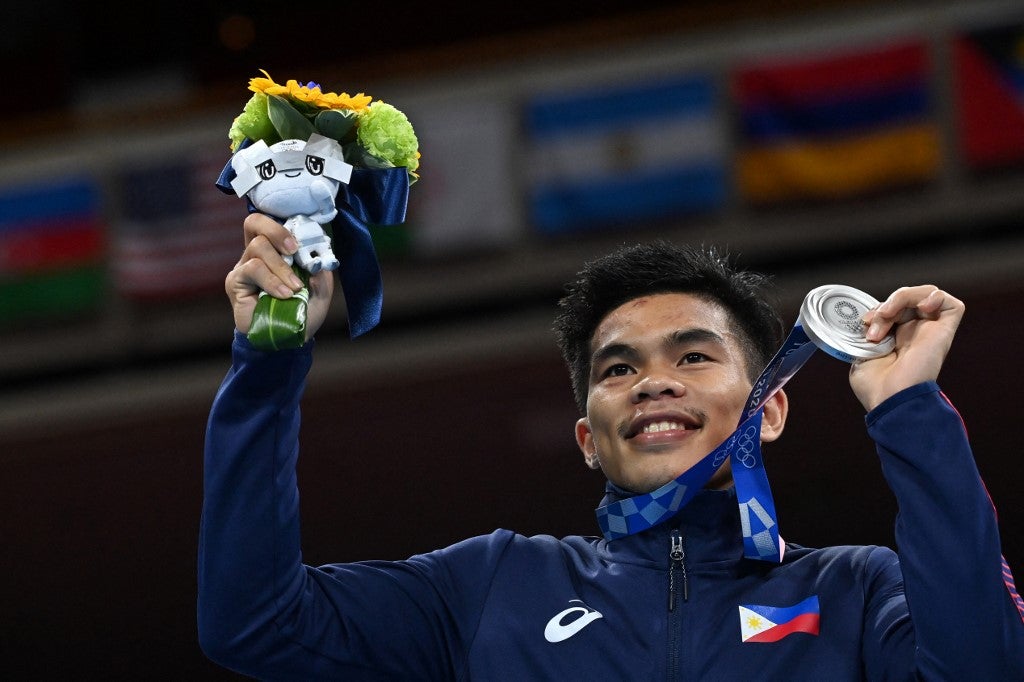 TOKYO—Out of a patched-up shanty near a landfill, out of makeshift walls made out of flattened tin cans, Carlo Paalam emerged to hold a shiny medal whose polished silver he formed an instant affinity with.

“It symbolizes my life,” Paalam said, his voice cracking as he drew parallels between his life story and the medal he settled for after bowing to Galal Yafai of Great Britain in the finals of the men’s boxing flyweight division in the Tokyo Olympics here.

A first-round knockdown delivered at the end of a three-punch combination keyed the victory for the cunning Yafai, who dulled Paalam’s scorching fight-back by cutting the ring into small, tight spaces that gave the Filipino little room to inflict much more serious damage.

“It’s a massive day for me,” said Yafai. “Being Olympic champion is something I always dreamed of. I’m overwhelmed.”

Paalam thus capped the country’s historic campaign in this year’s Summer Games not with the medal he had hoped for, but one that mirrored the journey he took out of squalor of living off other people’s refuse.

That connection lies in the fact that according to the Tokyo Medal Project, the medals being awarded to the winners in the Olympics are recycled from old electronic gadgets such as smartphones and laptops.

Digging deep into everything he had, Paalam looked like he would end up with a shinier find.

Plugging solid rights at the Briton’s head, Paalam had a sparse group of supporters made up of members of the Philippine delegation here in a roar of appreciation early in the bout.

But Yafai, biding his time, found the opening he needed and uncorked a routine southpaw 1-2, the jab and the straight landing perfectly to jelly Paalam’s knees before a follow up hook sat the Filipino on the canvas.

“I was quite surprised,” Yafai said after scoring the knockdown. “I knew that would win me the round. But he’s a great fighter for getting up and having the hardest determination to win after being put down.”

Life had knocked the 23-year-old fighter down much harder before. As a kid, Paalam would go home penniless after hours of scrounging for scraps. That meant nights when he would go to sleep hungry. But Paalam would get up every morning and make his rounds again.

He got up immediately after this knockdown, too, and shifted to a higher gear, knowing he would be fighting from the corner from thereon.

“I really gave it my best after the knockdown,” Paalam said. “You saw how I fought there. I know the heart of the Filipino always fights.”

And Paalam did enough in the first round to mitigate the damage of the knockdown by resuming the aggression and work rate he showed before he fell. He lost on all judges’ scorecards in that round on 10-9 scores, the best possible outcome he could have hoped for after getting floored.

That gave him two rounds to make up for lost points. And Paalam went to work.

But for a Philippine boxing team that had progressed to the medal rounds and produced two silver medals and a bronze by fighting strategic battles based on precise and detailed scouting report, it was the Filipino corner that got figured out this time.

Yafai blunted Paalam’s strengths by giving him little space to create momentum for his in-and-out strategy.

“He really wanted to cut me off,” Paalam said. “No matter what I did, he would cut me off. And I knew he got tired and I knew he also had a hard time against me.”

“It was a good fight,” Yafai said. “I think Carlo is a great fighter, obviously. I tried to get a good lead early and I managed to catch him and put him down in the first round. And I just wanted to hold on to that lead.”

Yafai completed the job in the second, controlling the fight to yield only one card among the five judges.

Paalam tried to reverse the outcome in the third but at that point, he needed a dominant round spiked by a knockdown—or even a knockout.

He could get neither, and winning on all judges’ cards there simply wasn’t enough.

In the end, the result was never in doubt. The gold had slipped away—for now.

“If I didn’t fall, I might have gotten the gold,” Paalam said.

But the silver would still be more than enough to haul Paalam and his family out of poverty. As a kid, Paalam fought for a bottle of Coke and for cheap prizes amounting to P120. He is expected to get a windfall this time, at least P17 million in cash incentives.

“This will change my life,” Paalam said.