No battle for control, but question lingers: Who is Pacquiao’s chief trainer? 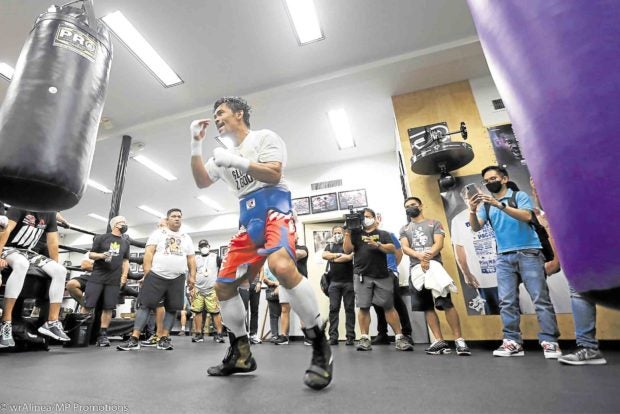 HOLLYWOOD — The arrangement has been a shaky, unwritten understanding. Buboy Fernandez is Manny Pacquiao’s chief trainer, while Freddie Roach is the corner’s consultant.

In reality, though, the lines are so blurred that as Team Pacquiao wrapped up training camp here and prepared to convoy to Las Vegas, the question that lingered was who would climb the ring as trainer for the bout against Yordenis Ugas on Aug. 21 in Las Vegas?

“For the (Lucas) Matthysse fight, he (Pacquiao) told me to be ready because I will be the chief trainer,” said Fernandez, speaking in Filipino, on Sunday at the lobby of Hampton Inn, which is located next door to the famed Wild Card gym on Vine St.

Fernandez, Pacquiao’s bosom buddy since their hungry years in General Santos City over three decades ago, has certainly earned his stripes as a trainer and not just a close confidante of the eight-division champ. But it is Roach, who owns Wild Card, who helped refine Pacquiao’s raw talent into a mix of speed and power that blitzed through weight classes and turned the Filipino ring icon into a global megastar.

And it is Roach who will most likely climb the ring as trainer against Ugas, even if Fernandez had been appointed with that duty in 2018.

“I just don’t want to complain,” said Fernandez. “But most probably, they will do that to me again on fight day. They can’t accept that I’m the chief trainer now.”

It was in 2018 when Pacquiao fought Matthysse and Fernandez was handed the reins of the corner. This was immediately after a shocking defeat to Australian Jeff Horn caused a rift between Pacquiao and Roach.

But the following year, Roach was back in the picture. Fernandez was designated as trainer for the Adrien Broner fight January of 2019 in Las Vegas. Roach came onboard as a “consultant.”

That’s when things got hazy.