Magsayo, out of gas, scores dramatic 10th round KO 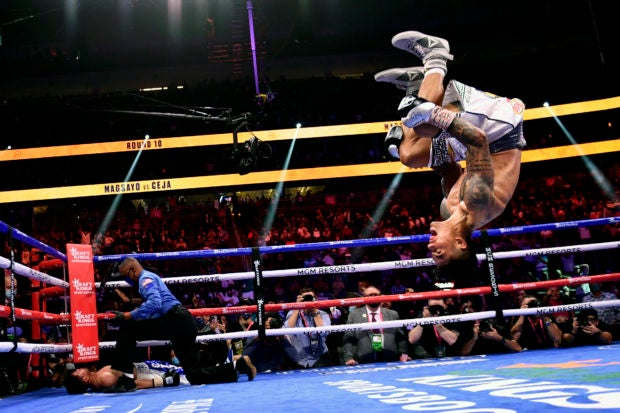 Down in the scorecards and on the brink of defeat, Mark Magsayo found his second wind and knocked out Julio Ceja 50 seconds into the 10th round of their World Boxing Council featherweight title eliminator on Sunday (Manila time) at T-Mobile Arena in Las Vegas.

The 26-year-old from Bohol struck first in the match, landing a stinging left hook that sent Ceja to canvas in the first round.

Ceja, however, composed himself and dominated the proceedings, flooring Magsayo in the fifth with his own left hook.

And as Ceja continued to find his stride, Magsayo started looking gassed. The Mexican took advantage and continued to work the body to put Magsayo in all sorts of trouble.

Ceja appeared ahead on the scorecards going into the 10th.

But Magsayo (23-0 16 KOs) somehow found his second wind, with the undefeated Filipino sending a flurry at the start of the period before knocking out the Mexican power puncher. INQ