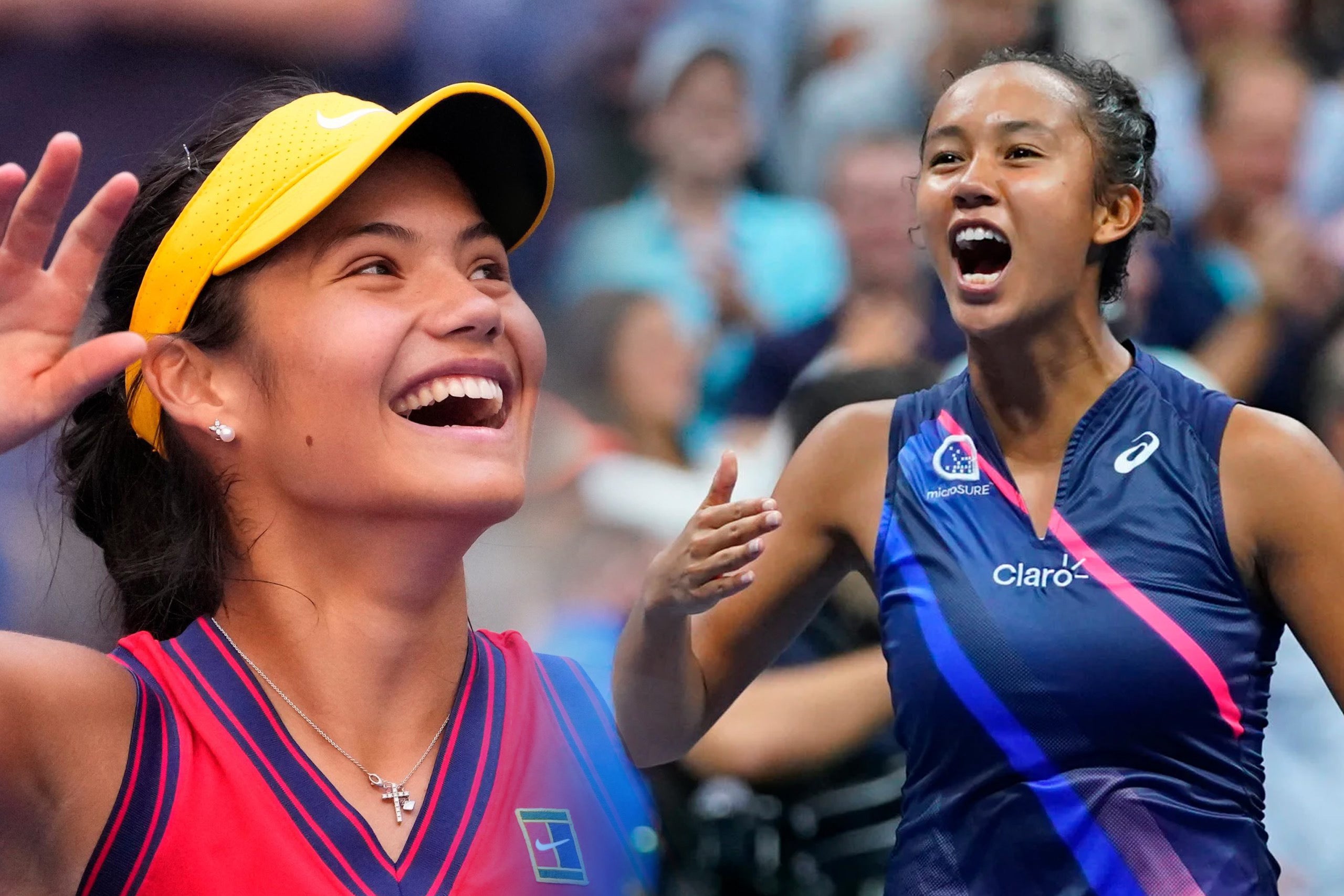 The teenagers are linked inextricably, though mostly by mere circumstance—Leylah Fernandez and Emma Raducanu are both children of immigrants whose parents played a key role in their rise to tennis prominence at the US Open in New York.

British teen star Raducanu was born in Canada to a Romanian father and Chinese mother before the family moved to England when she was two.

“For me, having a Chinese mom, she definitely instilled in me from a young age hard work and discipline,” Raducanu said.

Fernandez, on the other hand, is Canadian. Her father, an Ecuadorian footballer who has no tennis experience, serves as her coach. Her mother, a Canadian of Filipino heritage, moved to the United States to make money to support the family and her tennis dream.

“My mom had to go to California for a few years to support my family and I in the tennis world,” she said. “That few years been definitely hard for me because I needed a mom, I needed someone to be there for me through the age of 10 to 13. I’ve barely seen her at that time. Every time I saw her, it was like seeing a stranger but at the same time someone so familiar.”

On Saturday, in the US Open women’s final, the ties that bind the two will no longer be mere accident—and will be a little bit more tangible: Cords criss-crossed in a net that will divide the court between two youngsters chasing history at Flushing Meadows, having already written a lot of it in the past few days.

“I just can’t believe it,” Raducanu said. “A shock. Crazy. All of the above. It means a lot to be here in this situation. To be playing a Grand Slam final at this stage of my career, I have no words.”

In a real-life epic as amazing as any fairy tale, the teen prodigies will meet on Saturday at Arthur Ashe Stadium, where one of them will claim her first Grand Slam title.

It’s the first Slam final between teens since 17-year-old Serena Williams beat 18-year-old Martina Hingis at the 1999 US Open.

“I just want to play a final,” Fernandez said. “I’m going to enjoy my victory and worry about it tomorrow.”

Raducanu is the youngest Slam finalist since 17-year-old Maria Sharapova won at Wimbledon in 2004.

“Today I wasn’t thinking about anyone else except for myself,” Raducanu, who could become the first US Open champion not to lose a set since Williams in 2014, said.

“I had opportunities but I didn’t use them in the key moments,” Sabalenka said. “I didn’t play well. She deserved this win.”

Sabalenka netted a forehand with a wide-open court to hand Fernandez a 3-2 edge in the opening tiebreaker. The teen never trailed after that, winning the last four points to claim the first set in 53 minutes.

The Ashe stadium music director played the Eric Clapton song “Layla” as the crowd roared when she took the set.

“I have no idea [how I won],” said Fernandez. “I’d say it’s thanks to the New York crowd. They helped me. They cheered for me. They never gave up.”

In the third, Fernandez held to 5-4 and Sabalenka crumbled with the match on the line, issuing back-to-back double faults to 0-40 and sending a forehand long—her 52nd unforced error—to fall after two hours and 21 minutes.

“I don’t know how I got that last point in but I’m glad it was and I’m glad I’m in the finals,” Fernandez said.

Raducanu saved three break points in her opening service game then broke to lead 2-0. Sakkari double faulted to hand the teen a 4-0 edge and she took the first set in 36 minutes, aided by Sakkari’s 17 unforced errors.

An errant Sakkari forehand in the third game of the second set handed Raducanu the only break she needed as she advanced after 84 minutes on an overhead smash.

“I played some of my best tennis to date,” Raducanu said. “I knew I’d have to be super aggressive and execute and I’m just really happy with today’s performance.”

To do that, Raducano will have to break Fernandez’s mental fortitude, which was built through the hardships her family experienced.

“We’ve gone through so many things together as a family. I’m just glad that right now everything’s going on our side,” Fernandez said, referring to the time her mother had to leave her.

“It was definitely hard at first to accept,” she said.

“I don’t think I only did the job, but also my parents, my dad. He also made the decision one day to pack our things, go to the US so we can be with my mom because it was too much.You know what? I’m just glad that we made that decision of doing that, like having my mom go to California, because it made me stronger.”

Family was also with Alex Eala as she continued trekking her path in the US Open.

But the Filipino ace ran into a brick wall—in the girls’ singles, at least—as Sebastianna Scilipoti punished her faulty service game in a 7-5, 6-3 victory.

Eala’s father Mike, who was at the sidelines with the family, said Eala took the defeat in stride.

“She’s okay as always. Tough match. But the opponent (Scilipoti) was playing solid,” said the elder Eala. “No excuses. She’ll be back practicing again after this.”

Eala’s doubles quarterfinal match alongside Hanne Vandewinkel of Belgium, was canceled on Friday due to the weather. The two are set to face Americans Elizabeth Coleman and Madison Sieg on Saturday. If they win, they advance to the semifinals later in the day.

The 18-year-old Scilipoti was much more in control during the match than the 16-year-old Eala, who committed 46 unforced errors against her Swiss foe’s 28. —Reports from AFP and Marc Anthony Reyes