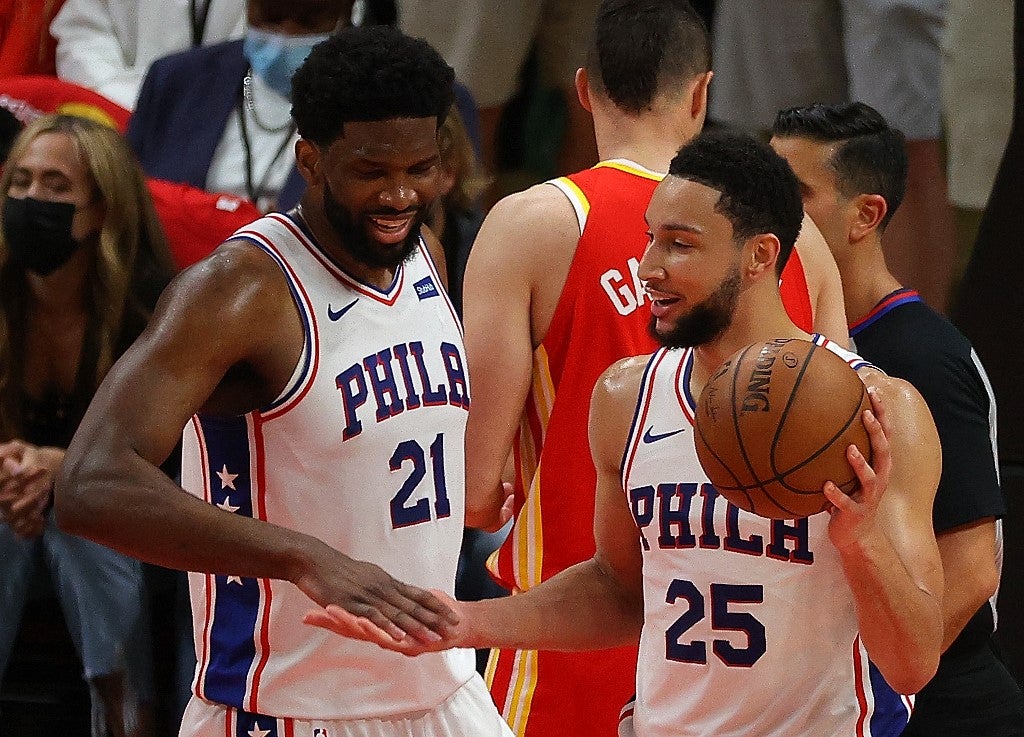 FILE – Ben Simmons #25 and Joel Embiid #21 of the Philadelphia 76ers react during the second half of game 3 of the Eastern Conference Semifinals at State Farm Arena on June 11, 2021 in Atlanta, Georgia. NOTE TO USER: User expressly acknowledges and agrees that, by downloading and or using this photograph, User is consenting to the terms and conditions of the Getty Images License Agreement. Kevin C. Cox/Getty Images/AFP (Photo by Kevin C. Cox / GETTY IMAGES NORTH AMERICA / Getty Images via AFP)

The Philadelphia 76ers put 25 percent of money owed to guard Ben Simmons per his contract — $8.25 million — in an escrow account in response to his holdout, multiple media outlets reported Friday.

The Sixers say they will deduct any fines Simmons racks up from the account. Simmons has not reported the team for training camp and has requested a trade.

Simmons’ contract calls for him receiving two payments of $8.25 million before the season gets underway. He received the first payment August 2.

The Sixers open their preseason schedule Monday against the Raptors in Toronto. Should Simmons miss that game, he reportedly would be fined about $227,000. That amount would be deducted for each game he misses.

“We’re in it for the long haul,” a source close to Simmons told ESPN.

A three-time All-Star, Simmons has averages of 15.9 points, 8.1 rebounds and 7.7 assists per game over his four NBA seasons. The 25-year-old Australian is under contract for four more years after signing a five-year deal worth more than $177 million in 2020.

In last season’s Eastern Conference semifinals against the Hawks, Simmons passed on a wide-open dunk late in Game 7. The 76ers ended up losing to close their season.

“Some guys rely on the team to be successful to stay in the league and make money somehow,” Embiid said after practice Thursday.