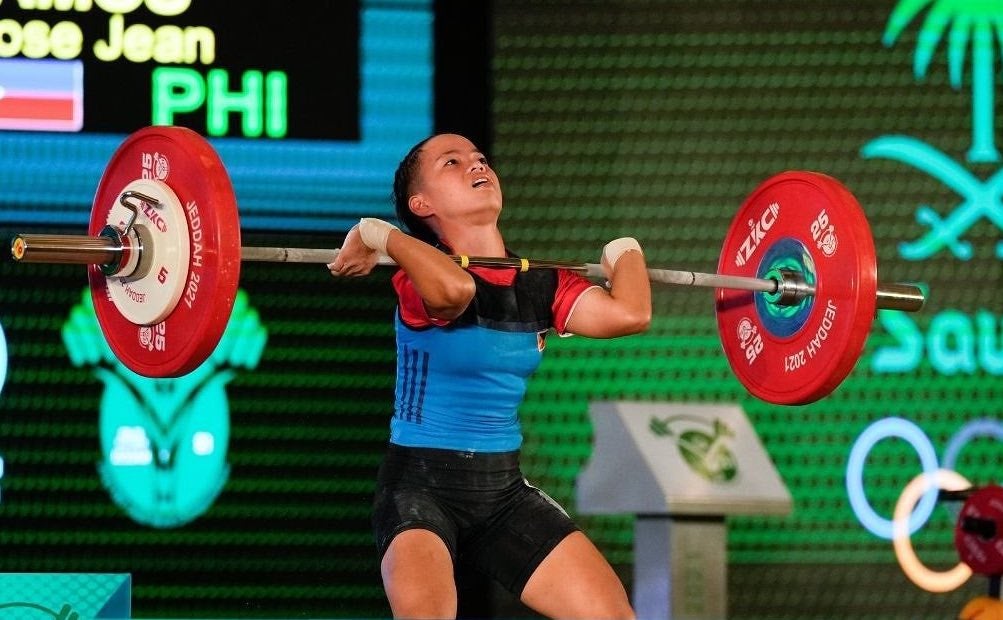 A silver in clean and jerk, where Rose Jean Ramos lifted 80 kilograms, did not weigh down her chances for the gold in the total category. —INTERNATIONAL WEIGHTLIFTING FEDERATION’S FACEBOOK

Rose Jean Ramos has been trumpeted as one of those likely to follow in the footsteps of Olympic gold medalist Hidilyn Diaz.

And in Jeddah, Saudi Arabia, Ramos showed just why officials are bullish on her future.

The 16-year-old lifter from Zamboanga City stared down some of the toughest rivals in her division and won two golds and a silver at the 2021 International Weightlifting Federation Youth World Championships.

“It was all about hard work in training, discipline and time management,” Ramos told the Inquirer, after ruling the women’s 45-kilogram division, the same weight class she dominated in an online version of the tournament last year, when she won a gold and a silver.

Ramos, who began making a name for herself in the Philippine Sports Commission (PSC)-Batang Pinoy Games, topped the snatch, where she lifted 67kg, and the total (147kgs) for her two golds—justifying her status as a tournament favorite.

Ramos is the younger sister of Rosegie, who is among the lifters being groomed for the 2024 Paris Olympics. Both girls have been identified as possible heirs apparent to Diaz, who won a gold medal in the Tokyo Olympics to end the country’s nearly century-old drought in the Summer Games.

Ramos’ silver came in the clean and jerk, where she lifted 80 right in her first attempt.

“This is my first world championship in a physical competition and it’s a blessing that I won these medals,” said Ramos, a Grade 10 student at the Zamboanga City High School.

Jeaneth Hipolito, another big Diaz fan, gave the Team Philippine campaign a rousing start on Wednesday when the 14-year-old Zamboanga City lass produced a bronze medal in the snatch of the women’s 40kg category.

“They (Hipolito and Ramos) are seen as future Olympians in Los Angeles 2028, but it highly depends on their determination to succeed,’’ said Samahang Weightlifting ng Pilipinas president Monico Puentevella.

After lifting 63 and 65, Ramos sealed the triumph in the snatch on the third and last attempt with a 67, duplicating her golden feat in the online meet last year.

She wasn’t able to hoist 82kg in the clean and jerk and her 80 was good enough for a silver, but the room Ramos created in the snatch proved pivotal in the total.

“They are going through the same route as Hidilyn. With enough support, they will also win medals in big tournaments for the country,’’ said Puentevella.

It was also the PSC-Batang Pinoy Games that gave birth to Diaz’s superstardom and the weightlifting queen, who also hails from Zamboanga City, began the first of four Olympic appearances as a 17-year-old in the 2008 Beijing Olympics. Diaz also won a silver medal in the Rio de Janeiro Olympics in 2016.

Oliwia Drzazga of Poland claimed the gold in the clean and jerk with an 85 while Indonesia’s Najla Khoirunnisa got the bronze on her second attempt at 80.

Christian Rodriguez added three more silver medals to the Philippine tally with a solid performance in the men’s 67kg.

At far third was Khaled Shaikh of United Arab Emirates with a lift of 93 in the snatch and 105 in the clean and jerk for a 198 total.

The contribution of Rodriguez jacked up the Philippine collection of two gold medals, four silvers and one bronze.