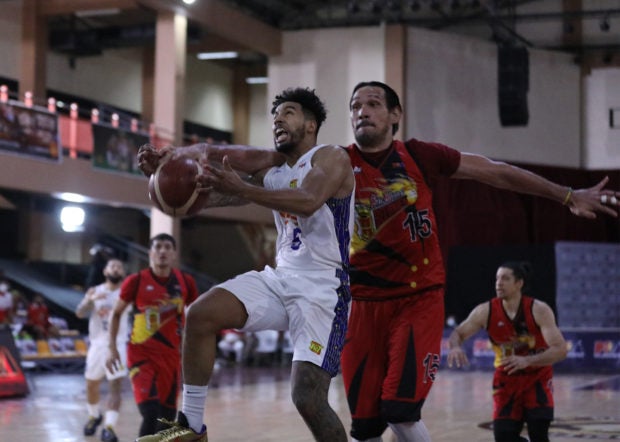 Taking all that the enemy could offer in a game where there was no tomorrow for both, TNT made San Miguel Beer an unsightly thing to see on Sunday night as a 97-79 triumph punched for the Tropang Giga a return trip to the PBA Philippine Cup Finals and a chance for redemption.

Turning in its finest defensive performance while riding the hot hands of Roger Pogoy and Mikey Williams, the Tropang Giga broke away methodically from the second quarter on at Don Honorio Ventura State University in Bacolor town, Pampanga, with a 4-3 victory forging a mouthwatering best-of-seven finale opposite Magnolia beginning this week.

“If their shots are falling, it does a lot for our offense because in the end—like I told them after Game 6—no matter how good the defense we play, basketball is still about putting the ball in the hoop,” Chot Reyes said in the customary winning coach’s interview.

“We can make five, six straight stops, but if we’re not able to score, that’s not sustainable. So our ability to score and make points allow our defense to be relevant.”

Pogoy’s game-high 27 points and Williams’ 20 allowed the rest of TNT to lay the groundwork of an unruffled and unflinching defense that also gave the club its first playoff series victory over San Miguel after a losing streak that has spanned seven meetings.

The TNT win also assured that San Miguel will be out of the Finals for the second straight season. This, after lording it over for five straight years before missing the title series last season in the bubble when June Mar Fajardo was recovering from a broken shin.

“In my five years in the league, we have always lost [in the playoffs] to San Miguel,” said Pogoy in Filipino. “It was our motivation to finally beat them.”

Troy Rosario and Kelly Williams chipped in twin-digit scores each to help atone for the team’s ghastly performance two nights ago where TNT bungled its first chance to wrap up the series.

“I thought that was the most important thing—our frame of mind coming into this ballgame. I said, ‘Let’s look forward to this game. Let’s not dread going into Game 7. Let’s be excited. Let’s look forward because we’re so fortunate, we’re so blessed to be even in this position,’” said Reyes.

“I think that’s the most important thing—when we shifted that thinking and the players bought into it and believed that,” he added.

Returning with a bang

Reyes, who was called out of retirement before the start of the season to help TNT regain lost glory, will be shooting for his first title since 2012, when he left the team to assume coaching responsibilities for the Gilas Pilipinas Five.

San Miguel drew 22 points from cornerstone and six-time Most Valuable Player Fajardo. Chris Ross added 15 while CJ Perez 11 in a stand that fell short in taking the Beermen back to the all-Filipino Finals after an early exit last year.

Terrence Romeo and Mo Tautuaa, who were integral in San Miguel’s victories this series, combined for just 11 points as both played hurt.

It was a sweet victory for TNT, which engaged its vaunted opponent in a seesaw series despite being the top-seeded team of this tournament.

The Tropang Giga will have another shot at the PBA’s prestigious crown they were two games short of snagging the last time. But they will now have the very man that helped the franchise into a powerhouse while he was calling the shots.

“We know that we still have a huge, huge mountain to climb,” said Reyes as the Hotshots are playing solidly of late and look capable of going all the way this time. INQ