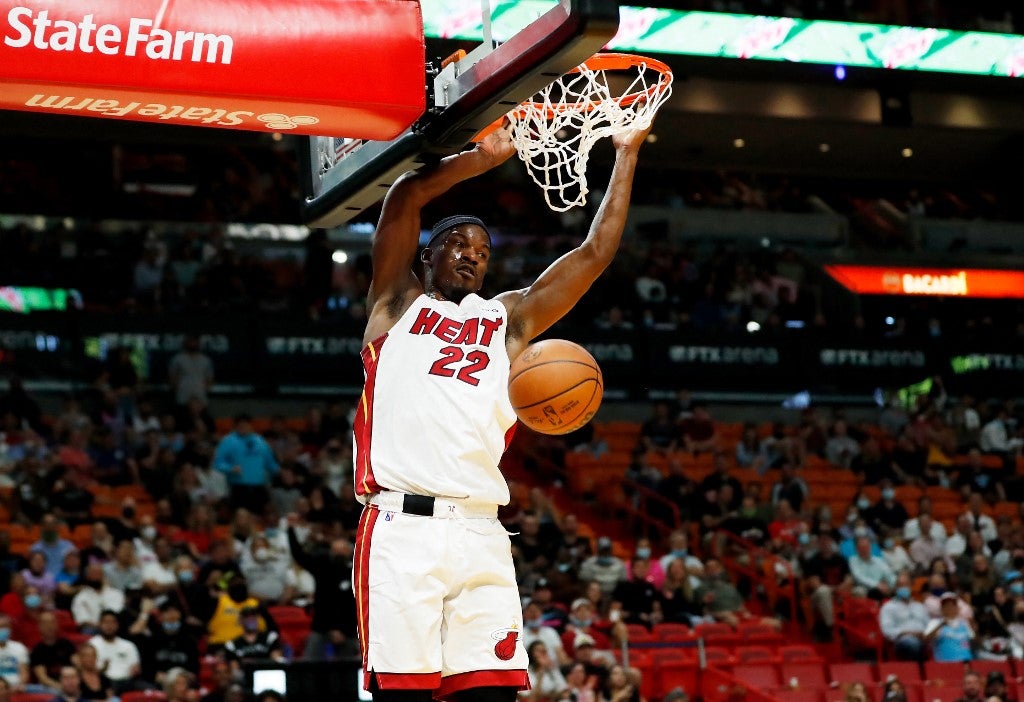 Jimmy Butler #22 of the Miami Heat dunks against the Orlando Magic in the first half at FTX Arena on October 25, 2021 in Miami, Florida. Cliff Hawkins/Getty Images/AFP (Photo by Cliff Hawkins / GETTY IMAGES NORTH AMERICA / Getty Images via AFP)

Jimmy Butler scored 24 of his 36 points in the first half to fuel the host Miami Heat to a 107-90 victory over the Orlando Magic on Monday.

Butler made 15 of 21 shots from the floor and added five steals to help the Heat defeat the Magic for the sixth time in the last seven meetings.

Butler’s sharp-shooting performance on Monday was significantly better than his previous game. He made just 7 of 22 shots in Miami’s 102-91 overtime loss to the Indiana Pacers on Saturday.

Bam Adebayo collected 16 points and 13 rebounds to record his third straight double-double to begin the season.

Markieff Morris had 16 points off the bench and Kyle Lowry had nine points and eight assists in his return from a one-game absence due to an ankle injury.

Franz Wagner and Jalen Suggs each scored 15 points and Cole Anthony and R.J. Hampton added 12 apiece for the Magic, who were playing on back-to-back nights. They recorded a 110-104 victory over the New York Knicks on Sunday.

Butler and Lowry put the Heat up in a hurry, with the former making six of seven shots while the latter had five assists to stake Miami to a 27-15 lead after one quarter.

Butler kept his foot on the gas in the second quarter, highlighted by a dunk that extended the Heat’s advantage to 47-28 with 5:04 remaining. Hampton and Wagner each drained a 3-pointer to spark a 10-0 run by Orlando, however Butler’s fourth steal of the half led to a late dunk to give Miami a 57-44 lead at intermission.

The Magic cut the deficit to six on two occasions in the third before Miami went on a 13-8 quarter-ending run, capped by Butler’s dunk that gave of the Heat an 81-70 lead.

That late surge continued into the fourth quarter, with Morris, Max Strus and Tyler Herro each draining a 3-pointer as the Heat extended their lead to 98-79.

They were not threatened the rest of the way.