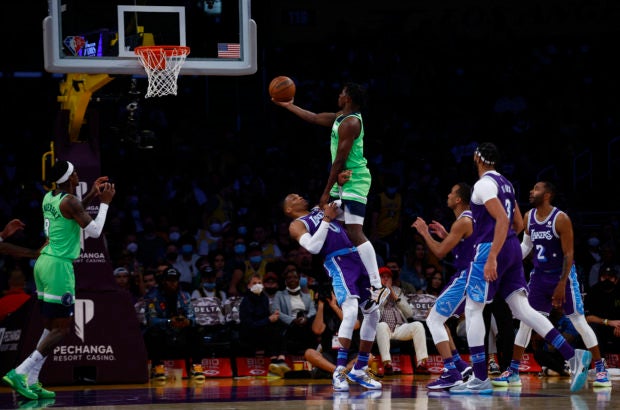 Anthony Edwards of the Minnesota Timberwolves drives against Russell Westbrook of the Los Angeles Lakers in the third quarter at Staples Center on November 12, 2021 in Los Angeles, California.  The Timberwolves crushed the Lakers, 107-83. (Getty Images via AFP)

LOS ANGELES – LeBron James may be “progressing nicely” in his rehab from an abdominal strain, but in his absence Los Angeles Lakers star Anthony Davis isn’t happy with the team’s performance.

Davis excoriated the Lakers’ performance in a 107-83 loss to the Minnesota Timberwolves on Friday that James could only watch from the sidelines.

“We’ve got to decide who we want to be,” Davis said after the contest. “A championship team? That’s not us right now.

“We’re not winning a championship the way we’re playing. We’ve got to be better, and we’ve got to care more for our wins at home. Wins in general. That was embarrassing.”

The Lakers led by five at halftime but were out-scored 40-12 in the third quarter by the Timberwolves, who went into the contest with the third-fewest wins in the Western Conference.

“We come out slow, lackadaisical offensively and defensively. We’ve got to get it together.”

The only good news for the Lakers on Friday was coach Frank Vogel’s revelation that James’s return might be on the horizon.

“His rehab is progressing nicely,” Vogel said. “He’s back to doing on-court basketball activity and this does not seem like it’s going to be an extended stretch and he’s to be considered truly day to day.”