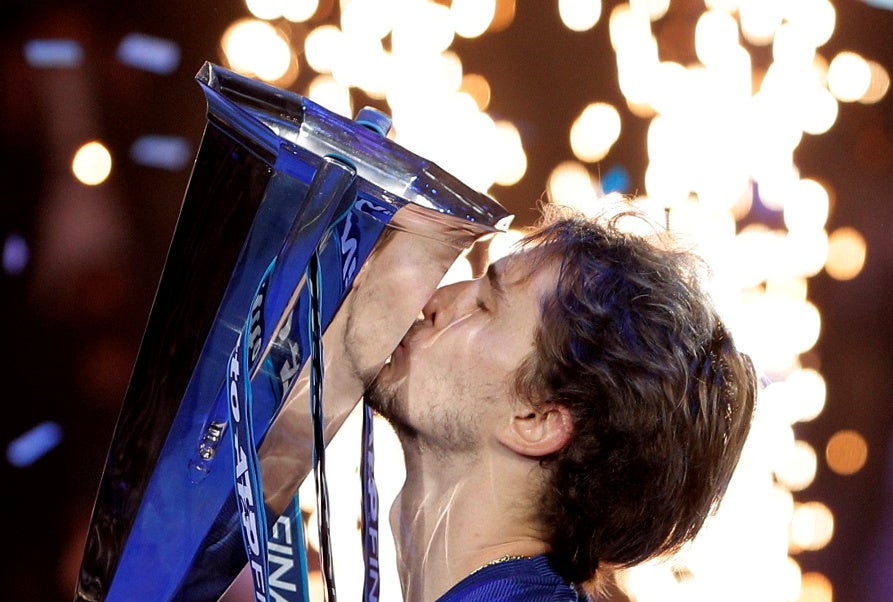 TURIN, Italy – Germany’s Alexander Zverev capped a memorable year by sweeping aside Russian world number two and defending champion Daniil Medvedev 6-4 6-4 to win the ATP Finals on Sunday, claiming the title for the second time in his career.

The 24-year-old Zverev, who did not face a single break point in the final, has now won six titles in six finals this year – including Olympic gold in Tokyo and two Masters titles in Madrid and Cincinnati.

Zverev, who also beat world number one Novak Djokovic on Saturday, became only the fourth player to beat the top two players in the world in the semis and final of the season-ending tournament.

Victory was also sweet revenge for Zverev, who lost in three sets to Medvedev in the round robin stage and came into the match having lost his last five meetings against the Russian.

“You keep talking about the perfect match… It was great. I mean in the final against somebody I had lost five times in a row, so I had to play one of my best matches,” Zverev said in a post-match interview.

“I’m happy about that, happy to go on holidays with this win now… There’s no better way to end this season than winning here, so I’m obviously fairly happy, but I’m also now very much looking forward to next year already.”

Zverev lost the first five points of the match but quickly changed gears to win 12 of the next 13, taking the early break and going 3-1 up in no time.

The German hardly put a foot wrong thereafter and was at his aggressive best from the baseline and the net to put Medvedev on the back foot, serving out the opening set and wrapping it up in 33 minutes.

Medvedev continued to struggle with his serve as Zverev broke him in the opening game of the second set to pile the pressure on the reigning U.S. Open champion.

Although Medvedev briefly found his groove at 3-2 down in the second set, the German immediately slammed the door shut to deny a break point opportunity.

Zverev’s ability to cover the court with long strides also proved too much for Medvedev, who looked to find angles for passing shots but quickly found himself scampering to stay in the rally.

With the writing on the wall, the Turin crowd tried to urge Medvedev to force a decider but Zverev was firmly in control, sealing the title with his eighth ace.

After their victory, Mahut signed the camera with the message “Where is Peng Shuai”, the Chinese former doubles number one, whose safety and whereabouts have been a concern since she accused a former vice-premier of China of sexual assault.

‘Today was just not my day’: Zverev regrets shock defeat in Indian Wells