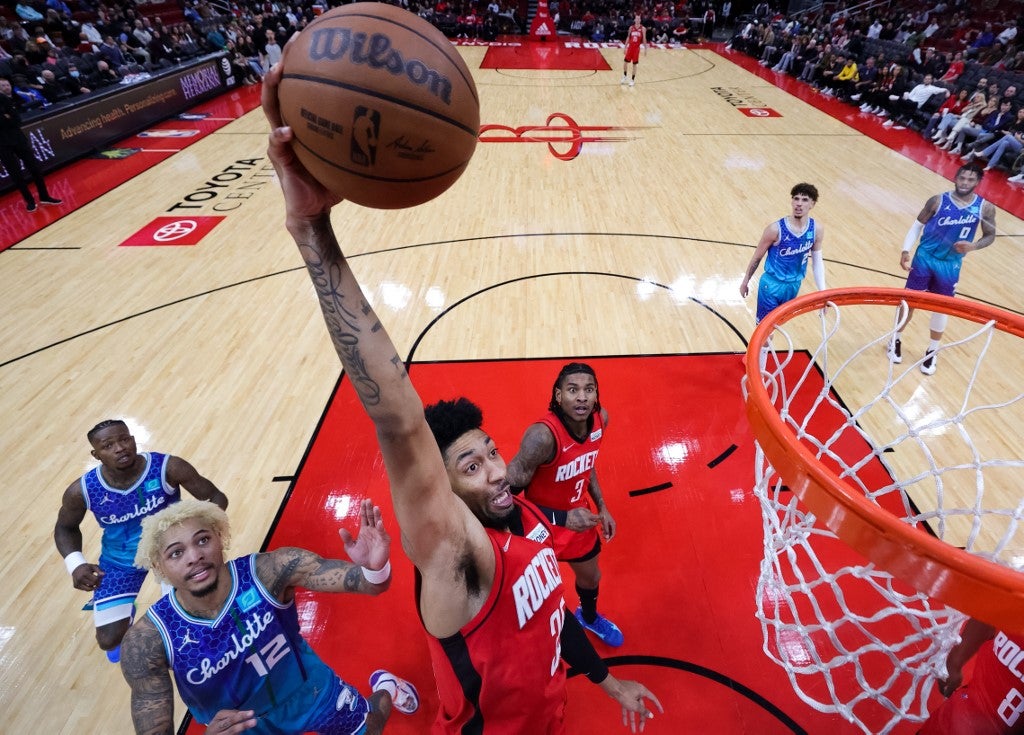 Christian Wood #35 of the Houston Rockets dunks the ball during the first half ahead of Kelly Oubre Jr. #12 of the Charlotte Hornets at Toyota Center on November 27, 2021 in Houston, Texas. Carmen Mandato/Getty Images/AFP

Christian Wood scored 33 points and the Houston Rockets finally put away the visiting Charlotte Hornets, prevailing 146-143 in overtime Saturday night to notch their first back-to-back wins of the season.

Houston has won just three of 19 games this season, and two of those have come across a four-night span. This one came against a Hornets team that had won eight of its previous nine games.

Kevin Porter Jr. (23 points) Eric Gordon (22) and Garrison Mathews (20) all had big games for Houston. Mathews drained five 3-pointers. Jae’Sean Tate notched 16 points and Armoni Brooks came off the bench and made five threes, accounting for all 15 of his points.

Terry Rozier scored 31 points and Kelly Oubre Jr., who made seven 3-pointers on his way to 27 points a night earlier against the Minnesota Timberwolves, added 23 points with only 2-for-10 shooting on threes. Miles Bridges (22), Gordon Hayward (21), LaMelo Ball (19) and P.J. Washington (13) also made key contributions for the Hornets, who were 20-for-50 on threes.

In regulation, a Brooks 3-pointer gave Houston a 120-103 edge at the 10-minute mark of the fourth quarter. The Hornets used a 16-3 run in less than five minutes to rally back in it before going up 128-127 on Oubre’s basket off an offensive rebound.

Oubre’s 3-pointer evened the score at 131-131 before Mathews hit a three for Houston. Washington’s dunk with 4.4 seconds left marked the final points of regulation before a Rockets turnover.

Houston racked up 43 first-quarter points and the Hornets responded with 41 points in the second quarter. The Rockets led 73-71 at halftime.

Rockets’ Jalen Green out at least a week with hamstring injury