Bucks pull away from Heat by halftime, cruise to win | Inquirer Sports

Bucks pull away from Heat by halftime, cruise to win 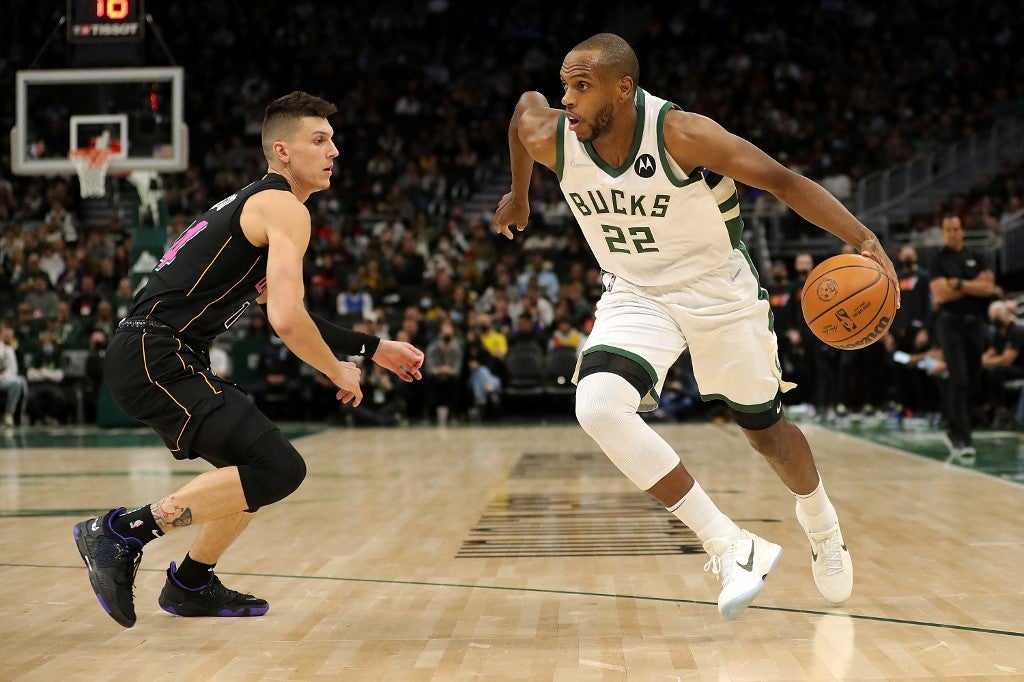 Khris Middleton #22 of the Milwaukee Bucks drives to the basket against Tyler Herro #14 of the Miami Heat during the first half of a game at Fiserv Forum on December 04, 2021 in Milwaukee, Wisconsin. Stacy Revere/Getty Images/AFP

The Milwaukee Bucks scored at least 30 points in each of the first three quarters and finished with their third-most points in a game this season as they took down the visiting Miami Heat 124-102 on Saturday night.

Milwaukee won its seventh straight home game and is averaging 115.7 points in those games. The Heat have dropped three of their last four games and have not been able to put together back-to-back wins since Nov. 18.

Khris Middleton stepped up in Giannis Antetokounmpo’s absence and tallied 22 points, nine assists and six rebounds. Pat Connaughton had 23 points and went 7-of-13 (53.8 percent) from 3-point range, and Bobby Portis finished with 19 points and 16 rebounds. Jrue Holiday chipped in 16 points and seven assists.

Dewayne Dedmon also finished with a team-high 13 rebounds, and Caleb Martin had 16 points off the bench.

With both Jimmy Butler and Bam Adebayo sidelined with injuries, the Heat struggled to find their offense and finished with their second-lowest field-goal percentage (40.5 percent) since Nov. 10.

The Bucks broke the game open before halftime, taking a 17-point lead into the break. Milwaukee made 50 percent of its field goals (24-of-48) and attacked the basket in the first half, scoring 30 points in the paint.

15 PTS, 4 REB and 5 AST for Khris Middleton at the break. #PhantomCam 🎥@Bucks take the lead into halftime on NBA League Pass: https://t.co/V0kkYEEIkG pic.twitter.com/iicnJNlmYp

Three players were already in double-figure scoring, led by Holiday’s 16 points on 6-of-7 shooting.

A 19-8 run that started just over midway through the third quarter gave the Bucks a 28-point lead and put Miami out of striking distance. Portis and Connaughton each had six points during the rally.

Antetokounmpo, who is out with calf soreness, missed his second straight game.

Veteran Wesley Matthews back with Bucks