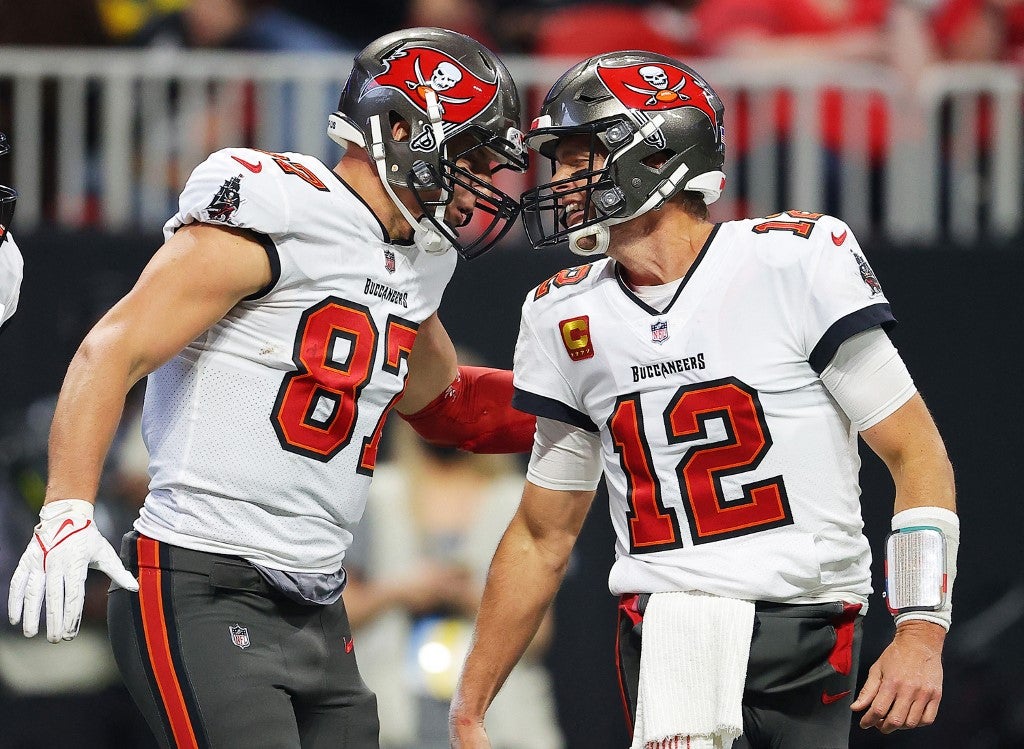 Rob Gronkowski #87 of the Tampa Bay Buccaneers celebrates his touchdown against the Atlanta Falcons with teammate Tom Brady #12 during the second quarter at Mercedes-Benz Stadium on December 05, 2021 in Atlanta, Georgia. Kevin C. Cox/Getty Images/AFP

Tom Brady threw for 368 yards and four touchdowns Sunday, two of them to tight end Rob Gronkowski, as the visiting Tampa Bay Buccaneers posted a 30-17 win over the Atlanta Falcons on Sunday.

Brady completed 38 of 51 attempts as Tampa Bay improved to 9-3 and moved one step closer to clinching the NFC South. The Falcons (5-7) missed on a chance to put pressure on Washington, which entered the day holding the NFC’s last playoff spot at 6-6.

Brady and Gronkowski hooked up on an 11-yard scoring strike with 29 seconds left in the third quarter for a 10-point lead. But it was Chris Godwin who carried most of the load for the Bucs’ receiving corps, catching 15 passes for 143 yards.

Matt Ryan completed 30 of 41 passes for 297 yards for Atlanta, including finding Russell Gage 11 times for 130 yards.

Each team scored on its first possession, taking different paths to the end zone. Tampa Bay threw on all 13 plays of the game’s first drive. Brady completed 11 for 75 yards, finding Leonard Fournette for 3 yards and a score at the 9:53 mark.

Atlanta needed just 3:13 to respond, thanks to a 40-yard run by Cordarrelle Patterson that put it deep in Bucs territory. Mike Davis thundered 17 yards off right tackle for the touchdown.

Brady hit tight end Cameron Brate for a 3-yard scoring strike with 4:23 left in the first quarter for a 13-7 lead.

Tampa Bay’s defense prevented the Falcons from taking the lead in the second quarter with a goal-line stand. Atlanta had to settle for a 21-yard field goal by Younghoe Koo with 8:39 left.

Brady connected with Gronkowski on a short pass over the middle that the tight end turned into a 27-yard touchdown with 4:54 remaining to make it 20-10.

The Falcons stole momentum just before halftime when Brady tossed a stunning interception on a screen pass that Marlon Davison returned 3 yards for a score that closed their deficit to 20-17.

‘We found a way to win:’ Lions end weeks of agony with win over Vikings