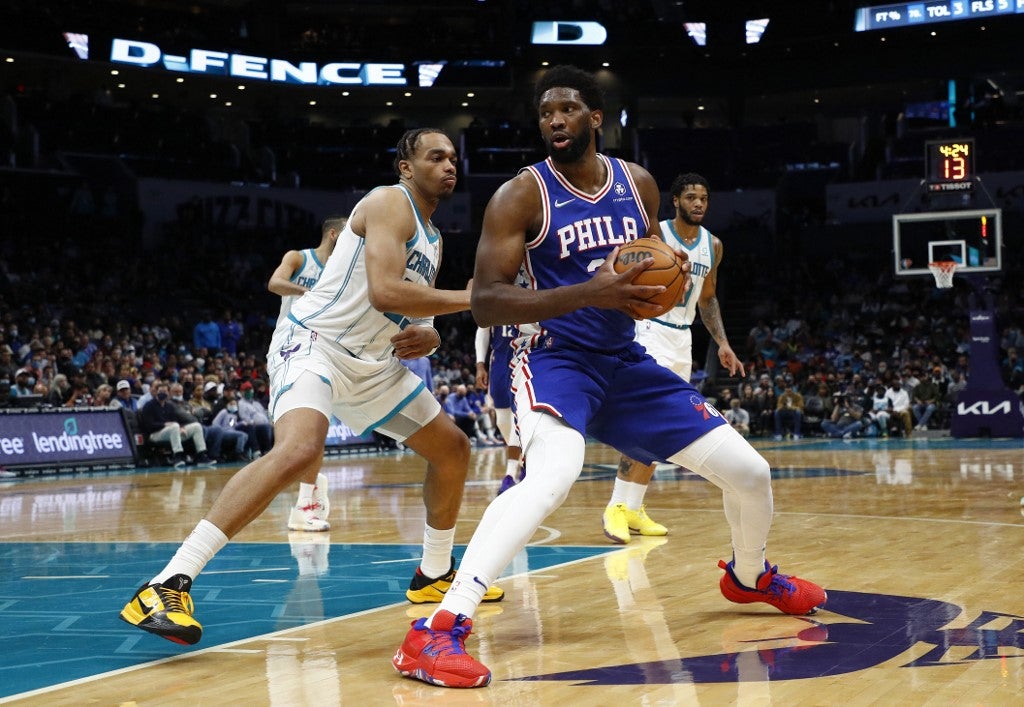 Joel Embiid #21 of the Philadelphia 76ers posts up against P.J. Washington #25 of the Charlotte Hornets during the second half of the game at Spectrum Center on December 06, 2021 in Charlotte, North Carolina. Jared C. Tilton/Getty Images/AFP (Photo by Jared C. Tilton / GETTY IMAGES NORTH AMERICA / Getty Images via AFP)

Joel Embiid scored six of his 43 points in overtime as the visiting Philadelphia 76ers defeated the short-handed Charlotte Hornets 127-124 on Monday night.

Tobias Harris added 21 points and Shake Milton had 16 points for the 76ers.

Charlotte’s Kelly Oubre Jr. poured in 35 points by making 13 of 24 shots from the field, including six 3s. He was off the mark on an attempt to force a second overtime.

🔔 @JoelEmbiid joins Giannis Antetokounmpo and Charles Barkley as the only players in the last 40 years with 40+ points, 15+ rebounds and 5+ assists at least 75% shooting!

The Hornets played for the second night in a row and did so again with a reduced roster. Starters LaMelo Ball, Terry Rozier and Mason Plumlee are in COVID protocol along with reserve Jalen McDaniels. Veteran guard Ish Smith, who was a key contributor a night earlier, was added to the protocol list.

Charlotte pulled off a three-point victory Sunday night at Atlanta, but while the offense flowed again there were concerns developing on defense.

P.J. Washington and Miles Bridges both had 16 points, Cody Martin pumped in 14 points, Gordon Hayward and Nick Richards each supplied 12 points and James Bouknight had 11 points for the Hornets. Charlotte also received eight points from JT Thor, who notched his first NBA points.

The Hornets scored eight straight points to claim a 109-108 lead with less than six minutes to play in regulation.

Thor’s basket gave the lead back to Charlotte at 112-111 with 4:35 left. It took the Hornets almost three minutes to score again, with a Bridges basket closing the gap to 115-114.

After Oubre put the Hornets ahead with a 3-pointer at the 1-minute mark, Embiid made one of two free throws. Oubre then missed a 3-pointer, with Embiid converting at the other end to tie the score.

Bridges missed a 3-point attempt, giving the 76ers a final chance after a timeout. Embiid’s missed shot sent the game to overtime.

Charlotte scored the last nine points of the first quarter to lead 34-23. But Philadelphia, which led by as many as 12 points, racked up 44 second-quarter points to build a 67-62 halftime edge. It was that close only because of Oubre’s steal and 3-pointer at the second-quarter buzzer.

The teams will have a rematch on the same court Wednesday night.