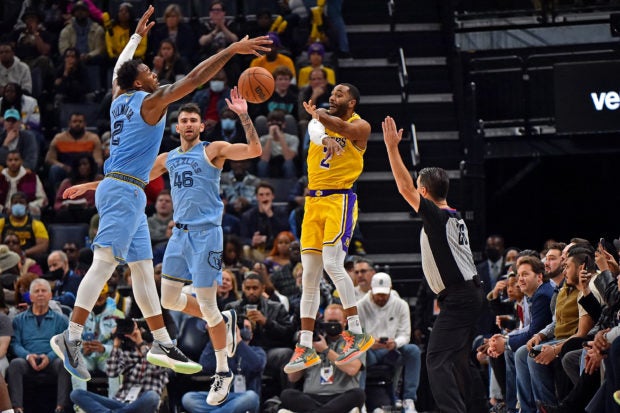 Wayne Ellington of the Los Angeles Lakers passes against Xavier Tillman of the Memphis Grizzlies during the second half at FedExForum on December 09, 2021 in Memphis, Tennessee.   )Getty Images via AFP)

Lakers superstar James scored 20 points, pulled down 10 rebounds and handed out 11 assists and Anthony Davis added 22 points for Los Angeles, but it wasn’t enough as the Lakers coughed up 22 turnovers to fall to a Grizzlies team still missing top scorer Ja Morant and also without defensive stalwart Dillon Brooks.

But they led by six at halftime and pulled away in the fourth quarter as the uneven Lakers found themselves unable to build on their comfortable victory over the Boston Celtics on Tuesday.

“Our biggest battle, our biggest problem this year is consistency,” said Lakers coach Frank Vogel. “Once we take one step forward we fall back, we have a disappointing performance. We have to find a way to catch ourselves from that.” LeBron James of the Los Angeles Lakers and Xavier Tillman of the Memphis Grizzlies dive for the ball during the second half at FedExForum on December 09, 2021 in Memphis, Tennessee.  (Getty Images via AFP)

James said the turnovers, which led to 27 Grizzlies points, were key.

“Tonight turnovers killed us,” he said. “We were doing a hell of a job over the last seven games averaging only 12.5 turnovers. Tonight we had 22 for 27 points.

“That’s been our Achilles heel before the last seven games, and tonight it bit us in the butt.”

At 13-13, the star-studded Lakers are in sixth place in a Western Conference in which the Golden State Warriors and Phoenix Suns are jockeying for supremacy and the best record in the league.

The Utah Jazz tightened their hold on third place on Thursday with a 118-96 victory over the 76ers in Philadelphia, where French center Rudy Gobert laughed off critics with a dominant display.

Gobert scored 17 points and pulled down 21 rebounds for the Jazz, who pushed their winning streak to six games.

Donovan Mitchell led the Jazz with 22 points — one of eight Utah players to score in double figures in the second night of a back-to-back for both teams. Rudy Gobert of the Utah Jazz dunks during the first quarter against the Philadelphia 76ers at Wells Fargo Center on December 09, 2021 in Philadelphia, Pennsylvania.   (Getty Images via AFP)

Utah were coming off a 136-104 victory over Minnesota on Wednesday, after which Timberwolves guard Anthony Edwards insisted that Gobert — a three-time NBA Defensive Player of the Year, “put no fear in my heart.”

Gobert acknowledged that he’d heard the comments, but said they didn’t provide an extra spur.

“It’s more funny than anything. People love to take shots at me for no reason. I never take shots at anyone, I just come in and do my job every night. When you’re the best in the world at something, people become insecure.”

The Jazz were fuelled by 15 three-pointers, five of them from Mitchell. They also held the edge in points in the paint, pushing their lead to as many as 23 in the fourth quarter.

Joel Embiid had 19 points and nine rebounds for Philadelphia. But 11 of those points came in the first quarter and Embiid was bothered later by pain in his right side, visiting the locker room in the second half but returning to the game.

“I honestly don’t know, but it was pretty painful,” Embiid said of the trouble. “I’m not sure what happened.”

Despite the uncertainty, Embiid said he thought he’d be ready when the 76ers host the Warriors on Saturday.