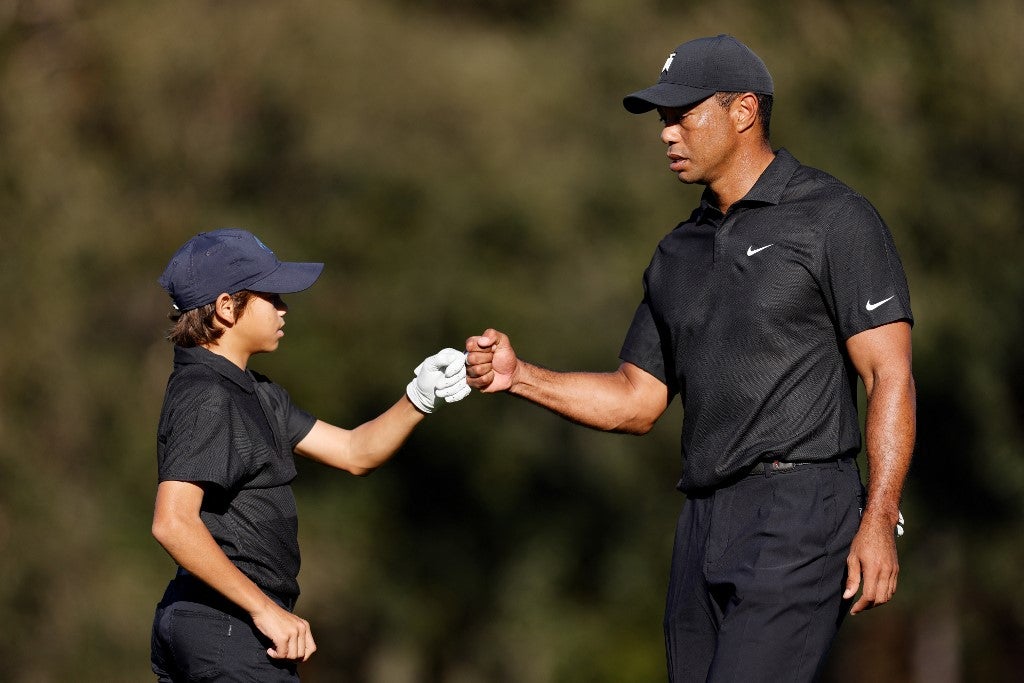 Tiger Woods’ relentless rehabilitation work paid off in a major milestone when he was able to tee it up with son Charlie for Friday’s Pro-Am ahead of the PNC Championship.

Woods is only 10 months removed from a February car accident that nearly cost him his leg. He used a cart to get around the Ritz-Carlton Golf Club in Orlando while relishing the opportunity to be back on the course with his son.

“It was an awesome day,” Woods said. “It was just awesome to be back out here playing and being out there with my son, and we just had an absolute blast.”

Woods was noticeably cautious with how much pressure he put on the leg and did not play much on the back nine as part of his plan to “save” himself for the 36-hole event over the weekend.

He admitted his swing is lacking its vintage power and speed, but Woods said he’s confident they will steadily improve with time.\

“I’m just starting to get back into trying to play again,” said Woods, who turns 46 on Dec. 30. “I don’t quite have the endurance that I would like to have. But just to be able to hit some shots, I’ve still got the hands, I’ve still the feel.

“Unfortunately, sometimes the feel doesn’t really match up with the speed or the shot that I’m seeing, so that’s one of the things that (caddie) Joey (LaCava) I were talking about. The ball is not quite flying as far as I’d like or I’m used to, and so we have to talk about some of the numbers and some of the shots and making some of those small adjustments.”

🎙 @TigerWoods meets with the media following the pro-am @PNCChampionship. https://t.co/FKi2SSlIG5

Woods said there have been “no days off” in his rehab following three months in bed after surgery to repair multiple fractures in his leg.

However, his competitive golf future remains very much in doubt. Woods reiterated that there’s a massive difference between driving a cart from shot to shot in a fun pro-am and being able to compete on the PGA Tour.

This is different,” he said. “I can hit around here, drop a ball here, hit a few wedges do, that. But to go out there and have 220 yards and know that you have to hit a 3- or 4-iron and miss the ball in the correct spot, and then hit certain shots and one stroke determines whether you win or lose, that’s a totally different mindset than what we have out here this week.

Woods said he will never petition to use a cart in a PGA Tour event. So part of any future plans to return to the tour will also include being able to walk 18 holes over four consecutive days.

Woods’ focus is on enjoying the weekend with 12-year-old Charlie, and what 2022 will bring remains anyone’s guess.

“It’s going to be awhile,” he said. “I couldn’t walk this golf course even right now, and it’s flat. I don’t have the endurance. My leg is not quite right yet and it’s going to take time.

“I’m a long way away from playing tournament golf.”