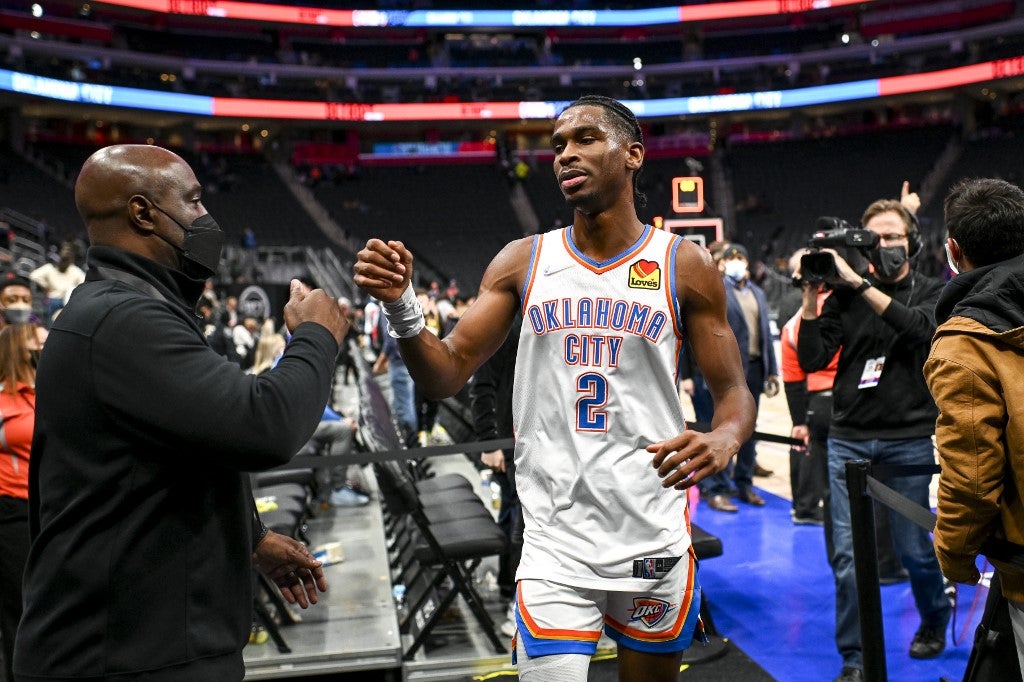 FILE – Shai Gilgeous-Alexander #2 of the Oklahoma City Thunder gives fists bumps after the game against the Detroit Pistons at Little Caesars Arena on December 06, 2021 in Detroit, Michigan. Nic Antaya/Getty Images/AFP

Luguentz Dort scored 29 and Shai Gilgeous-Alexander hit a game-winning 3-pointer at the buzzer to give the host Oklahoma City Thunder a 104-103 win over the Los Angeles Clippers on Saturday.

In Wednesday’s home loss to New Orleans, Gilgeous-Alexander hit a 3-pointer to tie the game in the closing seconds before the Pelicans’ Devonte’ Graham hit a desperation shot to end the game.

The Clippers’ Justise Winslow gave the Thunder an opening, missing a pair of free throws with 7.8 seconds to play and Los Angeles up two.

The win was just the fourth in 17 games for Oklahoma City. The Clippers have lost two consecutive games.

The Thunder led for much of the game but Los Angeles turned up the heat defensively to take the lead in the fourth, forcing eight turnovers in the fourth.

That included one in the final minute after the Thunder’s Dort picked the ball away from Reggie Jackson and went barreling toward the basket with a chance to put Oklahoma City back upfront.

But Dort lost the ball as he went up toward the basket, and Nicolas Batum took a feed from Jackson and drilled a 3-pointer at the other end to extend the lead to four with 33.8 seconds to play.

Instead of calling his final timeout with 17 seconds left after Jackson’s 3-pointer, Thunder coach Mark Daigneault elected to let his team try to score quickly. Gilgeous-Alexander delivered with a driving layup, which ultimately helped set up his heroics to end the game.

Luke Kennard led the Clippers with a season-high 27 points, tying a career-high with seven 3-pointers. Terance Mann added 18 and Jackson 16.

Dort, who missed Wednesday’s game with a left ankle injury, returned to go 12 of 19 from the floor. Gilgeous-Alexander added 18. Josh Giddey had 18 rebounds and 10 assists to go with eight points.