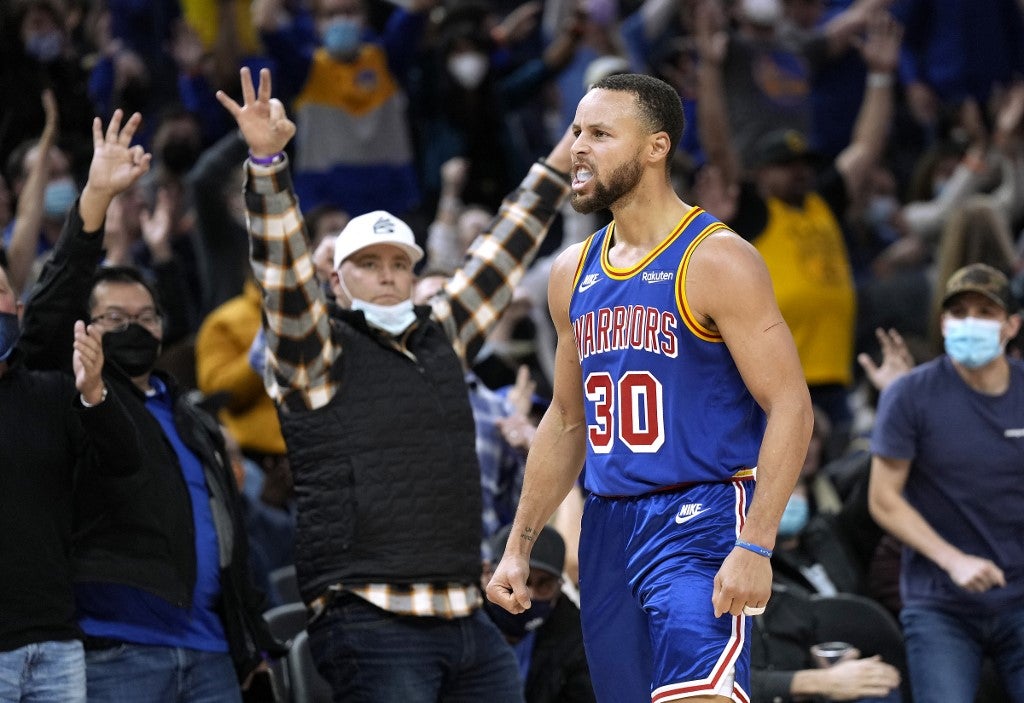 Stephen Curry #30 of the Golden State Warriors reacts after making a three-point shot against the Memphis Grizzlies during the fourth quarter at Chase Center on December 23, 2021 in San Francisco, California. Thearon W. Henderson/Getty Images/AFP

Juan Toscano-Anderson and Gary Payton II hit key hoops down the stretch and Stephen Curry exploded for 46 points as the Golden State Warriors finally got the better of the Memphis Grizzlies in a 113-104 victory Thursday night in San Francisco.

After ending the Warriors’ season last May in the NBA’s Western Conference play-in finale and denying Golden State a measure of revenge during an overtime road win in October, the Grizzlies appeared on the doorstep of a three-peat when De’Anthony Melton scored to tie the game at 102-all with 2:03 to play.

But Toscano-Anderson and Payton, getting increased playing time with Andrew Wiggins, Jordan Poole, Andre Iguodala and Damion Lee all out of action, then came through. Toscano-Anderson broke the tie with an interior hoop with 1:46 to go before Payton buried a 3-pointer 34 seconds later for a five-point lead.

When Curry connected from inside the key with 19.6 seconds to go to cap his fifth 40-plus-point game of the season, the Warriors completed a two-game homestand with a second straight win.

Another night, another 40-PT performance from @StephenCurry30 🔥

Take a look back at the BEST buckets from his NBA-leading FIVE 40+ PT games this season! pic.twitter.com/yrYriPuoPf

It was his second-highest point total of the season behind only a 50-point night against the Atlanta Hawks in November.

On a night when neither team led by more than 10, the Warriors seemed to be taking control when Kevon Looney hit a short jumper for a 95-87 lead with 7:30 remaining.

However, Memphis’ Ja Morant countered with a hoop, Kyle Anderson sank a 3-pointer and Desmond Bane hit a free throw following a Draymond Green technical foul, closing the gap to two and setting up the tight finish.

Payton hit four 3-pointers and totaled 22 points for the Warriors, who outscored the Grizzlies 57-24 from beyond the arc.

In just his second game since returning from a knee injury, Morant paced the Grizzlies with 21 points to go with a team-high six assists. Jaren Jackson Jr. and Melton had 20 points apiece.

Dillon Brooks added 13 points and Desmond Bane 12 for the Grizzlies, who lost their third straight in the wake of a five-game winning streak.