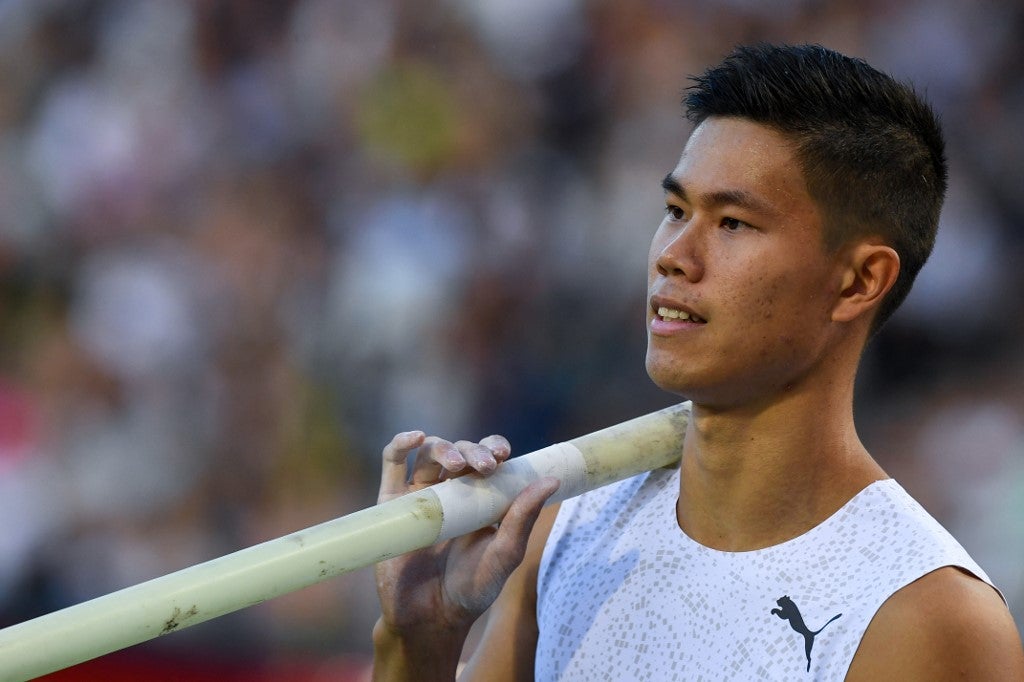 EJ Obiena will be in the middle of what Philippine Olympic Committee president Rep. Abraham “Bambol” Tolentino says could be a test case for sports organizations. —AFP

The decision of the Philippine Athletics Track and Field Association (Patafa) to drop EJ Obiena from the national pool will have minimal impact on the pole vaulter’s chances to represent the country in major international meets, the Philippine Olympic Committee (POC) said on Tuesday.

The country’s athletics federation dropped Obiena from the national training pool of athletes “effective immediately,” a result of the protracted controversy stemming from delayed payments to his coach, which Patafa said was wrongful misappropriation of funds.

“He (Obiena) now has to face the consequences,” said Patafa president Philip Ella Juico, who said also on Tuesday that the Tokyo Olympian will also face legal charges.

The Inquirer was still awaiting Obiena’s comment on the development at press time.

For a country still high on finally winning an Olympic gold medal, the Philippines can heave a sigh of relief that none of those consequences involve getting benched during major international meets.

Tolentino said that while the national federation reserves the right to “recommend or not, endorse or not” athletes for international meets, there is a provision in the charter of the International Olympic Committee (IOC) that allows national Olympic committees to do the same.

“In the absence of an endorsement from a national federation, the organizer [or] host owns a prerogative to allow embattled athlete/s—the IOC allows refugee athletes to compete in major international competitions [including Olympics],” Tolentino said in his statement.

Speaking to the Inquirer, Tolentino said the Obiena issue would be “a test case” for the IOC as well as the Philippine Sports Commission (PSC). The Cavite representative in Congress said precedents could be set when it comes to allowing athletes to compete when they are at odds with their national federations and also when it comes to financial support and incentives from the government.

“We’re going to show a timeline of events so we can give the IOC a clear picture of what happened and I’m sure they will understand EJ’s side,” Tolentino said when asked if Patafa’s dropping of Obiena would hamper the athlete’s chances to compete internationally.

Tolentino also said he was confident the PSC will continue to support Obiena and that the athlete would be eligible for government incentives even after being disowned by Patafa. Tolentino added that the POC would write a letter to World Athletics to back Obiena’s right to campaign in international meets, particularly in Olympic qualifiers.

Obiena will, however, need to face reckoning over Patafa’s allegations that he misappropriated public funds that led to late payments made to his coach, pole vault star maker Vitaly Petrov of Ukraine, and over filing spurious documents to mask the delayed salary disbursements.

“The report brought so much sadness and feelings of betrayal but we had to face the challenge because as professionals we should account for all the funds, government and private, given to us,” Juico said at a press conference on Tuesday. “We have a fiduciary responsibility over Patafa showing of all moral, ethical considerations which our present times consider less important than winning or making money.”

“So the board has accepted all the recommendations of the administrative committee that includes removing the 26-year-old young man, who knew the consequences of what he was doing as he repeatedly produced those spurious documents,” he added.

The Patafa is also set to file a complaint against Petrov before the World Athletics for “violation of the Integrity Code of Conduct” and immediately terminate his role as the federation’s coach. Petrov was largely responsible for Obiena’s rise in the global rankings, where he reached as high as No. 6 among the world’s top pole vaulters.

Obiena’s backer and adviser James Lafferty, will also be declared as persona non grata by the federation.

The athletics committee also found that Obiena “misappropriated” the amount of 61,026.80 euros (P3,661,608) released to him by the Patafa and the PSC intended for the coaching fee of Petrov.

Obiena’s mother Jeanette, was also accused of misappropriating the amount of P624,116.76 “she claimed from the PSC under pretext that it is a reimbursement of the coaching fee paid to Mr. Petrov for the months of January 2019 to March 2019.”

Obiena is the Asian record holder at 5.93 meters. He is also a key podium bet for the country in the Paris 2024 Olympics, where the POC will be dreaming of bigger things after tasting success in the Tokyo Games courtesy of weightlifter Hidilyn Diaz.

“I expected EJ will be dropped from the national team by his NSA (national sports association), a vengeful act that shuts down the chances of the Philippines from its Olympic dream,” Tolentino said, adding that the POC had already plotted several options should Patafa’s decision become an impediment for Obiena to compete internationally.

“There are many ways to go about this,” he told the Inquirer.

In his statement, he apologized that he could not reveal all those options just yet: “I am sorry that we cannot make our cards shown in public. Suffice it to say that we are created for the Olympic dreams of our athletes and we will support our athletes in achieving their dreams.” INQ