Mavericks to honor Dirk Nowitzki prior to hosting Warriors 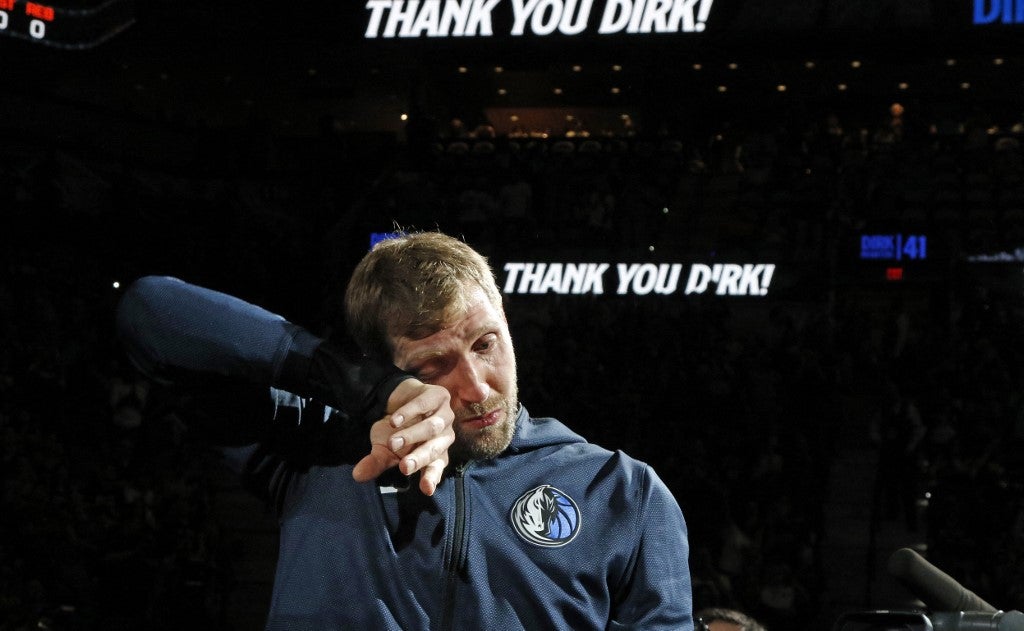 SAN ANTONIO, TX – APRIL 10: Dirk Nowitzki #41 of the Dallas Mavericks became emotional during video of his highlights before the game against the San Antonio Spurs at AT&T Center on April 10, 2019 in San Antonio, Texas. Ronald Cortes/Getty Images/AFP

The Dallas Mavericks will share the spotlight with the visiting Golden State Warriors on Wednesday when Dirk Nowitzki’s No. 41 jersey is retired.

Nowitzki retired in 2019 as the Mavericks’ all-time leader in most categories, including points and rebounds. His career point total (31,560) ranks sixth on the NBA all-time list.

Nowitzki played all 21 of his NBA seasons with the Mavericks. The 14-time All-Star also is linked to the Warriors through his relationship with Don Nelson, the legendary Golden State coach who orchestrated Dallas’ draft-night acquisition of the German star from the Milwaukee Bucks in 1998.

“I marvel at Dirk, and I absolutely love the guy for so many reasons,” current Warriors coach Steve Kerr said at the time of his retirement. “I love the way he plays. The way he carries himself; he doesn’t take himself too seriously, and yet he’s incredibly hard working in his craft. What a great combination.”

Nelson, who compiled 422 of his NBA-record 1,335 coaching wins with the Warriors and 339 with the Mavericks, is expected to be on hand for the ceremony. He was running the show in Golden State when Stephen Curry was drafted in 2009.

NBA commissioner Adam Silver also is expected to participate in the festivities.

Fellow European Luka Doncic, the current face of the Mavericks franchise, said he was looking forward to the historic night.

“He did a lot of things, not just for people from Europe, but in the United States,” the 22-year-old Doncic said. “Everybody has the highest respect for him, the highest everything. They just enjoyed watching him play. In Europe, too. Especially the kids. They grow up in Europe, they know Dirk. Everybody from Europe follows Dirk, so he got respect from everybody.”

Still awaiting green lights on Klay Thompson and James Wiseman, the Warriors had every other player available on Monday when an impressive team effort overcame a rare off night for Curry in a 115-108 home win over the Miami Heat.

Jordan Poole, in his second outing after a six-game COVID-related absence, poured in 32 points against the Heat. Draymond Green chipped in with five points, eight rebounds, 13 assists and four blocks in his return from a two-game absence in the league’s protocol.

Curry was held to a season-low nine points for Golden State, which has won five of its last six games.

The Mavericks welcomed back Doncic and Tim Hardaway Jr. from COVID-19 protocol with consecutive victories over the Oklahoma City Thunder and Denver Nuggets.

Doncic returned with a flourish after missing 10 straight games while also dealing with an ankle injury. He averaged 17.5 points, 8.5 rebounds and 12.5 assists in the wins over the Thunder and Nuggets.

Hardaway returned from a six-game layoff to total 21 points in the wins.

Mavericks to retire Dirk Nowitzki’s No. 41 jersey on January 5