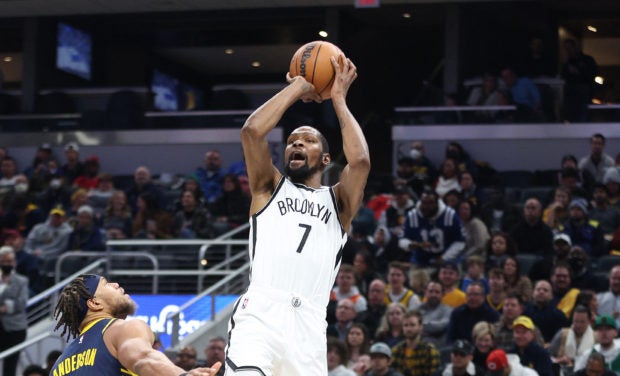 LOS ANGELES – Rookie Cam Thomas drove for the game-winning basket with 1.7 seconds left in overtime Sunday as the Brooklyn Nets salvaged a 121-119 NBA victory over the San Antonio Spurs.

The Nets, coming off an emphatic loss to the reigning NBA champion Milwaukee Bucks on Friday, got a much-needed victory on their Barclays Center home court — where they hadn’t won since December 16.

The star-studded Nets — led by 28 points from Kevin Durant with 26 points, 12 assists and seven rebounds from James Harden — squandered a 12-point lead with 4:59 remaining in regulation against a Spurs team lying 10th in the Western Conference.

A Durant basket with 4:01 remaining in regulation made it 113-103 for Brooklyn, but they wouldn’t score again in the fourth quarter and Spurs rookie Josh Primo’s three-pointer in the final minute was enough to force overtime.

Durant missed a pair of attempts and scored one basket in overtime.

But when he couldn’t get a shot off in the face of suffocating Spurs defense on the Nets’ final possession, he made the pass to Thomas for the game-winner.

“I was open so I made a play,” Thomas said. “Either shoot a three or get to the hoop — I got to the hoop, did a floater. Good basketball play.”

Thomas felt no hesitation in the moment.

“I just trust the work I put in,” he said. “I put in a lot of work so I’m always ready whenever KD or James kicks it to me in a situation like that.”

Durant shrugged off the suggestion the Nets — who have slipped behind the Chicago Bulls at the top of the Eastern Conference — should have put the Spurs away earlier.

“You’ve got to respect the Spurs — they don’t stop playing,” he said.

He added that the Nets, who like most NBA teams have struggled to field a consistent lineup amid injuries and Covid-19 concerns, did some things well — including out-rebounding San Antonio.

“It’s a different challenge each game,” he said. “We figure out what they are, we fight through them and get better.”

In other early games, the Los Angeles Clippers bounced back from a loss to the Memphis Grizzlies on Saturday with a 106-93 victory over the Atlanta Hawks.

Amir Coffey matched his career-high with 21 points and Serge Ibaka added 16 to lead the Clippers, who remain without injured Kawhi Leonard and Paul George.