Giannis Antetokounmpo of the Milwaukee Bucks is defended by Andre Iguodala and Andrew Wiggins of the Golden State Warriors during the first half of a game at Fiserv Forum on January 13, 2022 in Milwaukee, Wisconsin.  (Getty Images via AFP)

In a clash billed as a potential NBA Finals preview, the Bucks took an early stranglehold in Milwaukee on the way to a wire-to-wire win.

Two-time NBA Most Valuable Player Antetokounmpo added 12 rebounds and 11 assists for his third triple-double of the season and the 28th of his career.

Milwaukee, with coach Mike Budenholzer back on the bench after missing four games over Covid concerns, roared to a 77-38 halftime lead — Antetokounmpo pouring in 23 points before the interval.

The halftime lead was two short of the club-record the Bucks set when they led 77-36 against Orlando in November on the way to a 123-92 victory.

And it was the biggest halftime deficit for the Warriors since the franchise moved to California in the 1962-63 season.

“Obviously, we know we’re the defending champs, everybody’s going to come hard at us,” Antetokounmpo said. “But at the end of the day, it’s about us.”

With Curry limited to 12 points, Andrew Wiggins led the Warriors with 16 points.

Klay Thompson added 11, but the Warriors clearly missed Draymond Green, who remained sidelined due to tightness in his left calf. 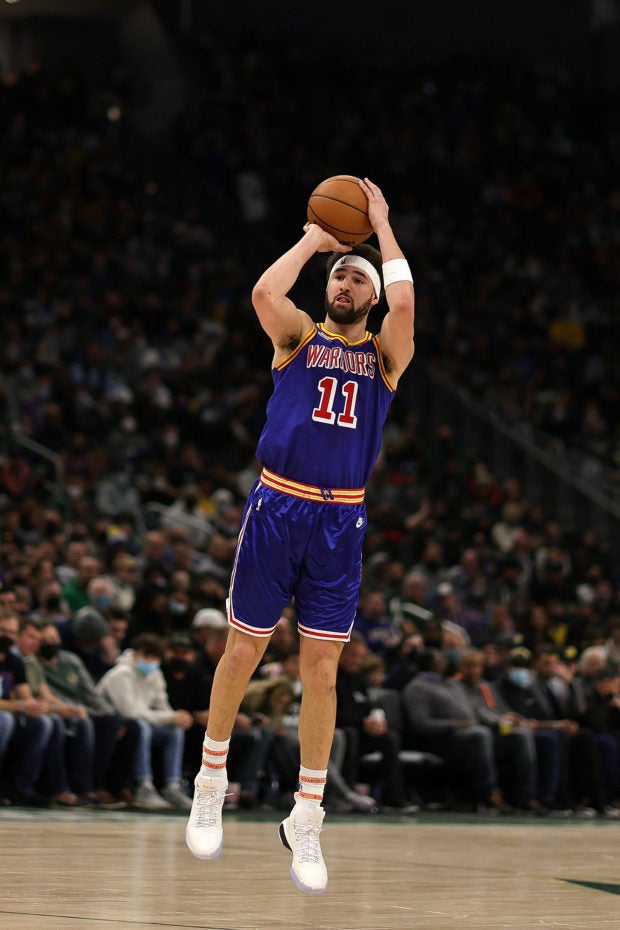 Klay Thompson of the Golden State Warriors takes a three point shot during the second half of a game against the Milwaukee Bucks at Fiserv Forum on January 13, 2022 in Milwaukee, Wisconsin.  (Getty Images via AFP)

Even so, the Warriors battled in the second half, out-scoring the Bucks 34-20 in the third quarter. They cut the deficit to 18 points early in the quarter, but wouldn’t get any closer.

“The second half was a much better effort,” Warriors coach Steve Kerr said. “I know the game was out of hand, but our response was great.”

Kerr insisted he wasn’t worried as the Warriors slipped to a game and a half behind the Phoenix Suns atop the Western Conference with their fourth loss in their last five games.

“To be honest I’m not that concerned,” he said. “I know we just got our butts kicked, but we’re just in a rough patch in our season. It happens to every team every year, pretty much.”

It was a much different story in Memphis, where the Grizzlies pulled away late to beat the Minnesota Timberwolves 116-108 and push their winning streak to 11 games. Ja Morant of the Memphis Grizzlies  (Getty Images via AFP)

Memphis star Ja Morant chipped in 16 points with nine assists and eight rebounds as the Grizzlies avenged a 138-95 loss to the Timberwolves in November.

Anthony Edwards led Minnesota with 30 points and D’Angelo Russell scored 29 as the Timberwolves made Memphis work to extend their winning streak.

A layup by Bane and a three-pointer by John Konchar helped seal it for Memphis, who trailed 60-53 at halftime but came out strong in the third quarter and led 90-84 going into the final period.

Elsewhere, the short-handed Nets fell 130-109 to the Oklahoma City Thunder in Brooklyn to lose ground in their quest to overtake Chicago atop the East.

Shai Gilgeous-Alexander scored 33 points, pulled down 10 rebounds and handed out nine assists for Oklahoma City, who snapped a five-game skid. James Harden of the Brooklyn Nets passes against Mike Muscala of the Oklahoma City Thunder during their game at Barclays Center on January 13, 2022 in New York City.  (Getty Images via AFP)

A day after a Nets team featuring its “Big Three” of Kevin Durant, James Harden and Kyrie Irving manhandled the Bulls in Chicago, Brooklyn found it tough going at home without Durant and Irving in the lineup.

Durant was resting, while the unvaccinated Irving remains ineligible to play in home games due to New York’s vaccine mandate.

Harden shouldered the load with 26 points, nine assists and seven rebounds, but the Nets couldn’t silence the Thunder.