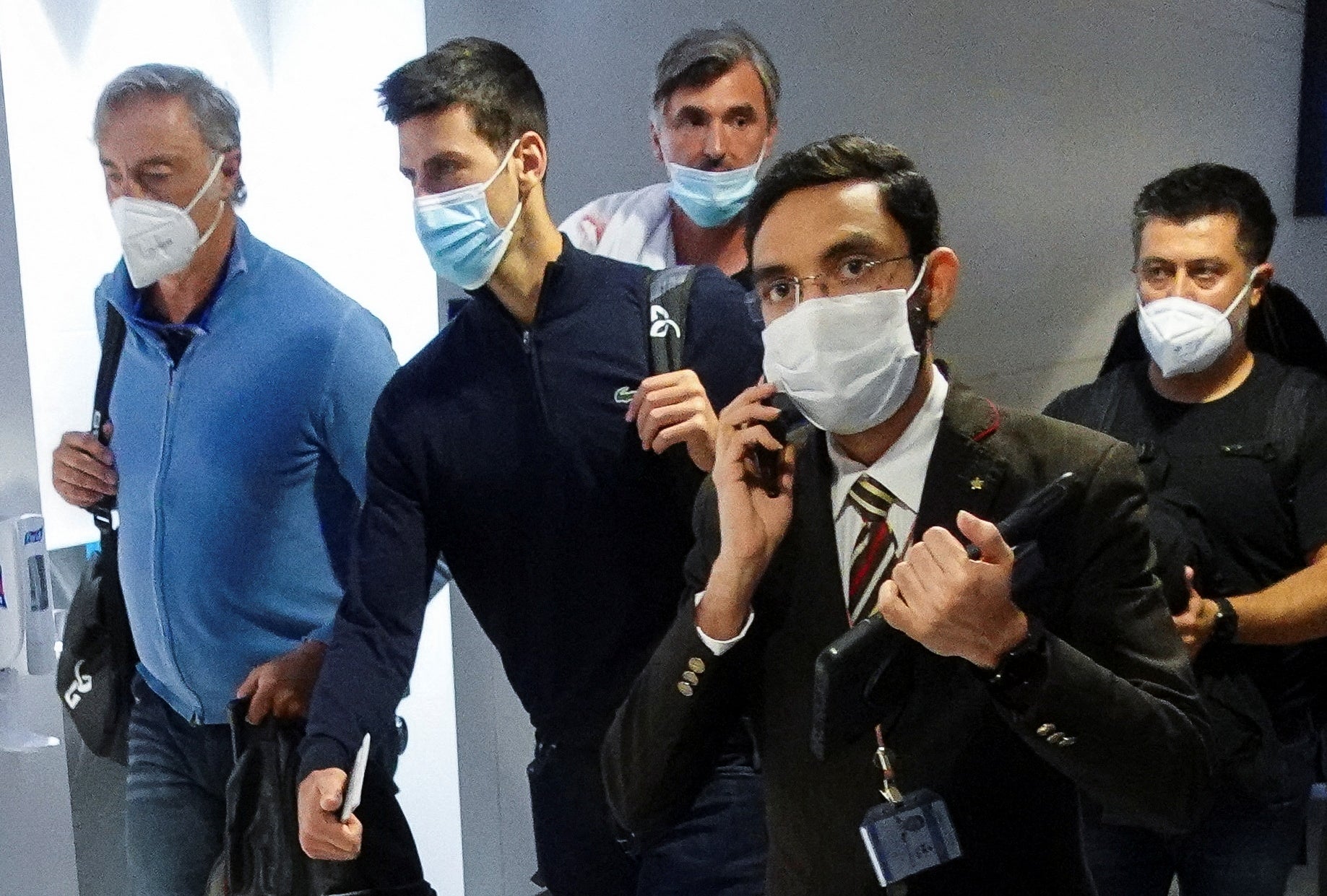 Serbian tennis player Novak Djokovic walks with his team after landing at Dubai Airport after the Australian Federal Court upheld a government decision to cancel his visa to play in the Australian Open, in Dubai, United Arab Emirates, January 17, 2022. REUTERS/Loren Elliott

SYDNEY – Australian Prime Minister Scott Morrison has left the door open for Novak Djokovic to compete at next year’s Australian Open despite the tennis superstar facing an automatic three-year ban from entering the country.

The world number one player left Australia late on Sunday after the Federal Court upheld a government decision to cancel his visa, capping days of drama over the country’s COVID-19 entry rules and his unvaccinated status.

Under immigration law, Djokovic cannot be granted another visa for three years unless Australia’s immigration minister accepts there are compelling or compassionate reasons.

“I’m not going to precondition any of that or say anything that would not enable the minister to make the various calls he has to make,” Morrison told 2GB radio on Monday as Djokovic was en route to Dubai.

“It does go over a three-year period, but there is the opportunity for (a person) to return in the right circumstances, and that will be considered at the time.”

The unanimous ruling by a three-judge Federal Court bench dealt a final blow to Djokovic’s hopes of chasing a record 21st Grand Slam win at the Australian Open, which starts on Monday, dismaying his family and supporters.

In a rollercoaster ride, the world’s top men’s player was first detained by immigration authorities on Jan. 6, ordered released by a court on Jan. 10 and then detained again on Saturday pending Sunday’s court hearing. Serbian tennis player Novak Djokovic rests at Melbourne Park as questions remain over the legal battle regarding his visa to play in the Australian Open in Melbourne, Australia, January 12, 2022. REUTERS/Loren Elliott

Djokovic, 34, said he was extremely disappointed by the ruling but he respected the court’s decision.

“I am uncomfortable that the focus of the past weeks has been on me and I hope that we can all now focus on the game and the tournament I love,” Djokovic said in a statement before flying out of Melbourne.

The player was filmed by Reuters wearing a mask and taking selfies with fans at the arrival gate in Dubai as he waited for his entourage to get off the plane. The group then headed through a security channel for transfer passengers.

The saga caused a row between Canberra and Belgrade, with Serbian Prime Minister Ana Brnabic calling the court decision “scandalous”.

Australian Foreign Minister Marise Payne said on Monday that she and Morrison had been in touch with Brnabic during the legal process last week.

“I am absolutely confident that the very positive relationship, bilateral relationship between Australia and Serbia will continue on the strong footing that it currently enjoys,” Payne told reporters.

Immigration Minister Alex Hawke had said Djokovic could be a threat to public order because his presence would encourage anti-vaccination sentiment amidst Australia’s worst coronavirus outbreak.

The Federal Court judges noted their ruling was based on the lawfulness and legality of the minister’s decision, but did not address “the merits or wisdom” of the decision. They have yet to release the full reasoning behind their decision.

The Serbian tennis player’s visa troubles fuelled global debate over the rights of people who decline to get vaccinated as governments take measures to protect people from the two-year pandemic.

Djokovic had been granted a visa to enter Australia, with a COVID-19 infection on Dec. 16 providing the basis for a medical exemption from Australia’s requirements that all visitors be vaccinated. The exemption was organized via Tennis Australia and the Victoria state government.

That exemption prompted widespread anger in Australia, which has undergone some of the world’s toughest COVID-19 lockdowns and where more than 90% of adults are vaccinated.

The controversy became a political touchstone for Morrison as he prepares for an election due by May, amid wrangling over responsibility between his center-right federal coalition government and the center-left Victoria state government.

Morrison on Monday defended his handling of the situation and differentiated Djokovic’s case from vaccine skeptics within his own government.

“If you’re someone coming from overseas, and there are conditions for you to enter this country, then you have to comply with them,” he said. “This is about someone who sought to come to Australia and not comply with the entry rules at our border.”

The men’s tennis governing body ATP said the decision “marks the end of a deeply regrettable series of events”, adding it respected the decision, a comment echoed by Tennis Australia.

On the tennis circuit, fellow players have become impatient for the media circus to end.

“The situation has not been good all round for anyone. It feels everything here happened extremely last minute and that’s why it became such a mess,” said former world number one Andy Murray.