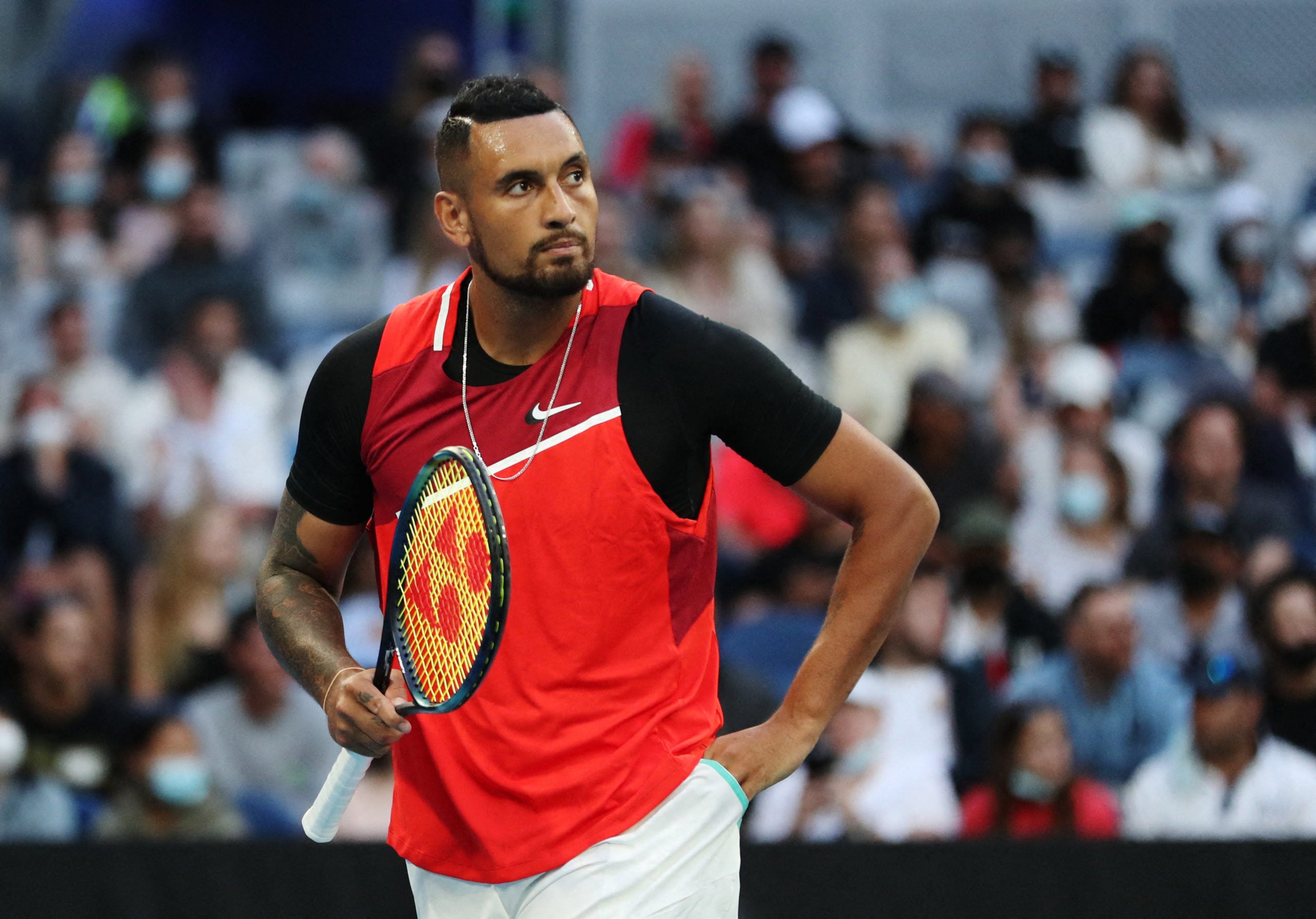 Australia’s Nick Kyrgios reacts during his first round match against Britain’s Liam Broady in the Australian Open on January 18, 2022. REUTERS/Asanka Brendon Ratnayake

MELBOURNE—Nick Kyrgios promised COVID-weary fans a show after recovering from his own infection and duly delivered on Tuesday with a tweener-laden 6-4 6-4 6-3 win over Briton Liam Broady on Tuesday to reach the Australian Open second round.

Kyrgios matches are box office gold but have dwindled through the pandemic, and there was danger home fans would miss the Australian at Melbourne Park this year after he tested positive in the leadup.

But after exiting isolation on Sunday, the tennis maverick returned to the combustible John Cain Arena and gave raucous fans a night to remember as he set up a blockbuster clash with second seed Daniil Medvedev.

Sealing the win with a furious backhand return down the line, Kyrgios dropped an “F-bomb” in his televised on-court interview and performed Cristiano Ronaldo’s trademark post-goal celebration.

On his way out of the arena, he took a swig of beer from a cup offered by a fan. COVID-19 be damned.

“I served … well today,” said Kyrgios with an obscenity as fans roared in agreement.

“I don’t know what I have done to this crowd as you guys are a zoo now. I am super happy to be here again.”

It took only minutes for Kyrgios to ignite the terraces by breaking Broady in the opening game. He closed out the next game with an under-arm “tweener.”

Your front row seat to the @NickKyrgios show 🤩

Having lit a fire in the crowd, Kyrgios proved unable to control it, as fans hooted between serves and yelled at Broady to go home.

“I kind of know I’ve created this … show, anyway,” he said to chair umpire Nico Helwerth, urging the German to do more to quell the commotion.

Relegated to the straight man in Kyrgios’s routine, there was little for 128th-ranked qualifier Broady to do but grin and bear it as fans jeered and 41 winners fired past him.

“Everyone is telling me, like, ‘Oh you’ll really enjoy it. It’s going to be amazing’. But I thought it was absolutely awful,” said Broady.

“It’s the first time I’ve ever walked onto a tennis court and been booed, which for me was a crazy experience.”

Kyrgios has a 2-0 career record over U.S. Open champion Medvedev, both wins in 2019, but never faced him at a Grand Slam.

Playing a long match against the super-fit Russian may be tough for Kyrgios after his recent illness — and especially if the match is held away from John Cain Arena.

“We’re going to be playing on Rod Laver Arena … Let’s be honest, I think we are,” he said.